Time for a new compact with nature 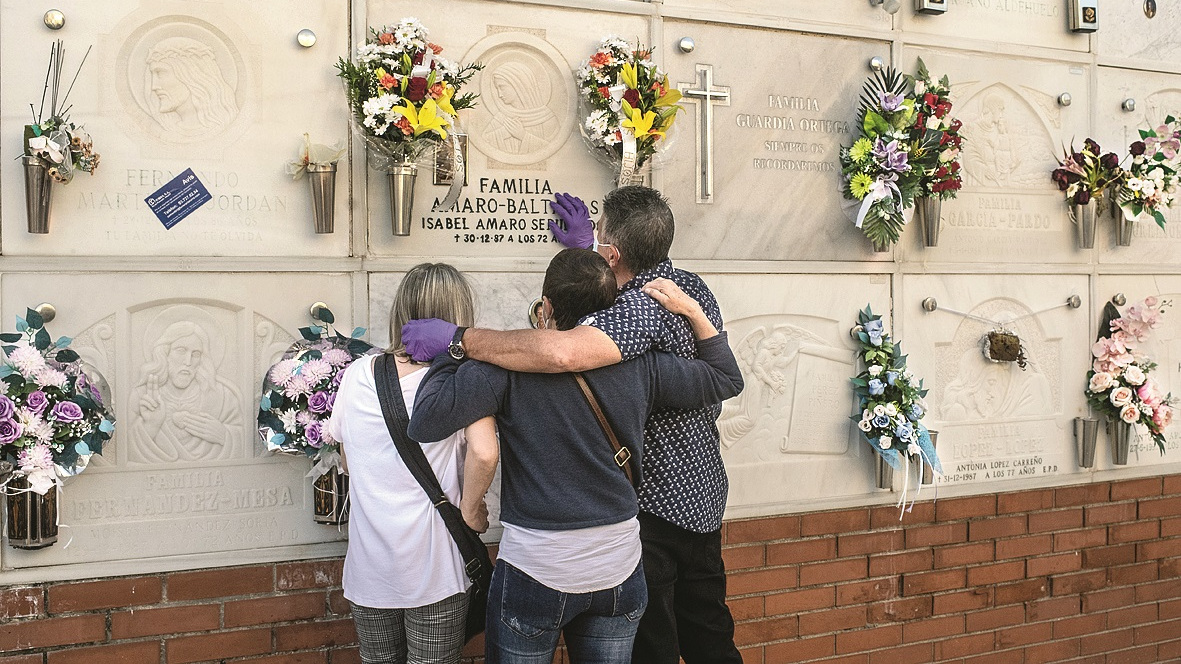 Francisco Baltanas (R) comforts his two sisters Isabel (C) and Maria del Carmen as they say their last goodbye during the funeral of their mother, Rafaela Carrillo, who died on March 26 due to a COVID-19 infection at the age of 85, at the cemetery of Sabadell on May 31, 2020 in Sabadell, Spain.
David Ramos/Getty Images
Mahesh Rangarajan   |   Published 17.05.21, 02:51 AM

The human world as we know it is turning on its axis. The scale of human loss and suffering due to Covid-19 may well be the greatest public health challenge since the end of the Second World War. But beyond this, it also calls for a relook at the way the world order deals not only with the consequences of the pandemic but also its origins. A re-evaluation of the way nations cooperate to secure human lives and how we relate to nature is a must.

Now comes a Great Leveller. And a potential challenge to all platforms and umbrellas. Technology is vital and we will beaver away, and in imaginative ways, to deal with the crisis. How do we think and work when desolation is at the doorstep? We need to marshal resources for a longer journey of hope and of sustaining thriving societies of humans across the planet.

And how is this to be one that comes to terms with a world beyond borders? This is not a new idea, but the planet is divided into nearly 200 nation states, four times as many as those that existed at the start of the Great War of 1914-1918. The Covid-19 pandemic, much like the threat of climate change or the extermination of oceanic fauna, is a phenomenon that spans the globe. Just as migratory birds or insects can travel over continents or oceans, so too can the organisms that afflict humans so badly.

It was so in the past with the plague bacillus that ravaged Europe and China in the mid-14th century. The so-called Spanish flu that wreaked havoc in India originated in the United States of America. But these were in medieval times or prior to the birth of the United Nations, when platforms of international cooperation did not exist the way they do today.

The quest for peace after 1945 was about ending the scourge of war, nuclear or conventional. But peace needs to be understood with respect to Homo sapiens being one of many life forms. After all, our very physiology makes us home to many microorganisms that also inhabit the bodies of other mammals. In his insightful work, Sapiens, the historian, Yuval Noah Harari, shows how the most common microorganisms thrive in the company and bodies of domestic animals such as pigs and cows. Plagues, of course, are spread by the rat as the host.

But this may also be true of animals not domestic or reliant on us, such as bats or pangolins. There are borders and boundaries, but are we transgressing them in ever new ways and how?

How do we re-imagine our own place on earth not apart from other life forms but as part of a continuum? If pandemics in our own age leave a legacy, not just a scar, what should that legacy be?

The dignity of humans is indivisible. As a species we are bound together as much by our vulnerabilities as our much-celebrated strengths. Writing on the elimination of smallpox in 1973-74 in India, Professor Paul Greenough drew attention to an irony of history. The same years that saw India put paid to smallpox witnessed the launch of an all-in effort to save the tiger in situ from extinction. Both efforts entailed state and Union governments working in tandem with international organizations, the World Health Organization in the former case and major conservation NGOs in the latter.

But doing this needs a fresh bout of energy at the international level. A major power like the US has had remarkably positive results, as with the Ebola virus where it worked in tandem with West African governments. Ebola entered a human body when villagers ate a dead chimpanzee in the forest. Working closely with four major countries in the region, the Barack Obama administration and the WHO were able to contain the damage.

The Joe Biden administration’s efforts to revisit the patent regime and also to consider many more vaccines for the rest of the world are a step in the right direction. If the pandemic is not controlled in Latin America, Africa, and Southeast and South Asia, it is unlikely that the rest of the human species will be able to escape its consequences.

The Covid-19 crisis is only one of the challenges on a planet-wide scale. Divisions of borders or of entitlement offer little protection or at best a flimsy shell against global changes. The very connections of travel and trade, commerce and culture that criss-cross land, sea and sky help pathogens travel with and indeed within us.

Quite similarly but more insidiously the burning of fossil fuels dug out from the earth’s crust is unleashing rapid changes in the atmosphere. Climate change or the wipe-out of species as in the overkilling of whales can all have larger consequences. The consequences of these epochal changes via human action, uneven as they are in pace and scope across the earth, have now been well documented.

Bertrand Russell and Albert Einstein had once urged all to “remember your humanity and forget the rest”. This was in the famous Pugwash declaration. They wrote of a genie in the atom that could destroy civilization forever.

We confront the reality of pandemics that will take an untold toll on human life and the fabric of all our cultures, reducing large parts of the earth’s ecosystem, its land and sea, to a lifeless moonscape.

We now need big steps to heal the wounds technological progress has wrought on the fabric of life. Better science and wiser use of knowledge apart, a new humility may be the need of the hour.