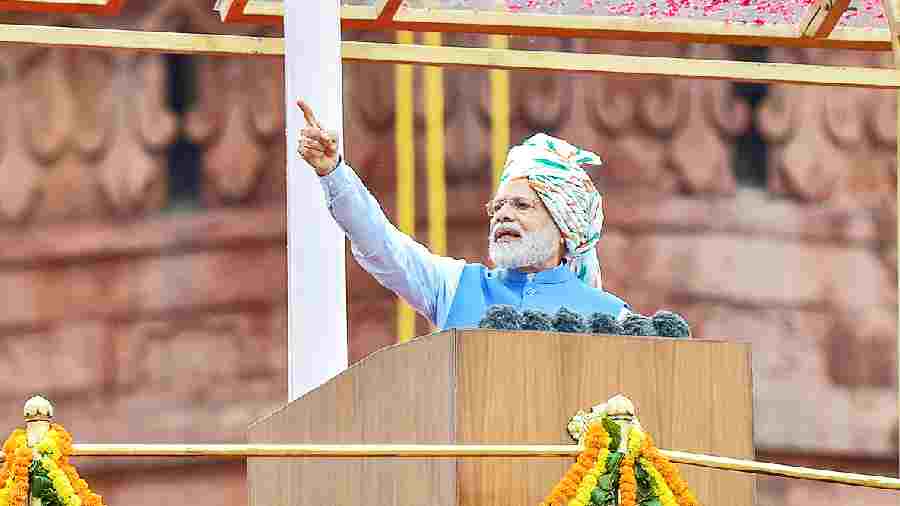 It is a commentary on the low esteem with which politicians are held that the articulation of what is sometimes referred to as the ‘vision thing’ has faded from our list of expectations. Politicians, not least those enjoying offices of State secured through a popular mandate, are blessed with popular expectations that mainly extend to the realms of good governance and personal integrity. Unfortunately, over the years, this has not extended to something more enduring. Today’s leaders are increasingly seen as birds of passage, occupying a temporary space and then departing with not even a footprint on the snow, barring their acts of institutional devastation.

This wasn’t always so. What marked the leadership of Mahatma Gandhi from others wasn’t merely his mass following — many others had equal, if not more popular, adulation — but his reputation as a moral beacon. He combined the role of a political leader — and there is no doubt that he was quite accomplished in this game — with that of a religious guide, a sphere where his teachings were less adhered to but nevertheless respected. The religious idiom was less apparent in the public lives of his contemporaries, such as Gopal Krishna Gokhale, Bal Gangadhar Tilak, Bipin Chandra Pal, Subhas Chandra Bose, V.D. Savarkar and Jawaharlal Nehru, to name just a few of the pre-Independence stalwarts. However, such was the nature of the swaraj project that galvanised the entire Indian subcontinent that politics invariably meant much more than plotting the overthrow of the British raj. It also involved painting, however sketchily, a picture of the good life that would follow the attainment of self-rule. Sri Aurobindo — one of the most profound thinkers of the preceding century — didn’t feel that the reflection of a blueprint of the future involved was possible with the rigours of routine political activism. Consequently, he abandoned the political struggle and retreated to Pondicherry for a life of reflection. The others tried to blend politics with a view of the future but ended up focussing disproportionately on activism.

This tradition of reflection which was a hallmark of the freedom struggle persisted in the immediate aftermath of Independence. Nehru, much more than others, was mindful of the fact that it was important to chart a future course for a country that had experienced the loss of sovereignty for at least 200 years, if not since the establishment of the Delhi Sultanate. It isn’t that others didn’t have their own ideas of a future India. What marked Nehru from the others was that he, and only he, enjoyed complete political authority. This gave him the necessary space and the acceptability to take the necessary steps — often decisive and more often tentative — to create an intellectual consensus over the future course for India. The four pillars of that unstated consensus — democracy, socialism, secularism and non-alignment — weren’t debated either in Parliament or in the hustings. They were presented to India either as fragments in speeches or, at best, in the Five Year Plans. Yet, by default, these ideas were elevated to the realms of India’s national philosophy. Nehru was accorded the de facto status of being the only leader who had both the right and the authority to set out India’s future trajectory. It is not that India lacked others in the political arena who had different ideas. In writing the history of post-1947 India, alternative visions articulated by, among others, Jayaprakash Narayan, Ram Manohar Lohia, M.N. Roy, Deendayal Upadhyaya and C. Rajagopalachari must find place. However, they were less heard and less accepted because Nehru had the political authority and they didn’t.

It is a tragedy that after Nehru, most of India’s prime ministers fell back on the mundane, if not the banal. Indira Gandhi’s Independence Day speeches from the Red Fort were replete with concerns over inflation and shortages. But since these were recurrent, there are grounds to believe that there were no serious attempts to discover alternative approaches. Rajiv Gandhi, to his credit, realised that the consensus forged by his grandfather had run out of steam. He had the desire to refashion India into the 21st century. Unfortunately, his modernisation plans weren’t ever backed by the necessary intellectual rigour and remained piecemeal. After he lost the 1989, India entered the 25-year phase of coalition governments where instead of vision there was cacophony, accompanied by backroom deals. Atal Bihari Vajpayee was one of the most accomplished orators of his day. Yet, his prepared texts delivered listlessly on August 15 reflected the political uncertainties and confusion of the times. Had Vajpayee discarded caution, put aside his prepared speech, avoided the dhobi list of well-intentioned schemes and spoken from his heart about the India that was confronting the 21st  century, the country may well have been spared the wasted decade that came with two terms of the equally well-intentioned Manmohan Singh.

It is in this context that the speech from the Red Fort to mark the Amrit Mahotsav by Prime Minister Narendra Modi was such a breath of fresh air. Mindful of the exceptional importance of the occasion, Modi spoke from his heart, not about the welfare schemes that deliver the incremental vote in the elections but about the direction India must take in the coming 25 years. First, he envisaged an India that would put an end to shoddiness and mediocrity and emerge as a developed nation with an indigenous capacity that will be the envy of the world. In the process, he performed the last rites of Nehruvian socialism built on inefficiency, shortages and shoddiness. Secondly, he addressed the real meaning of freedom and called for an end to centuries of mental servitude, what some would call dhimmitude. India’s national identity would be its very own. Finally, he called for a new path based on zero corruption and zero entitlement based on family connections. These had hitherto been hallmarks of India and he sought to relegate them to the dustbins of history.

This was more than a routine Independence Day speech. In effect, Modi unveiled the contours of a new nationalist consensus.