Why New India is faltering simultaneously on secularism and GDP 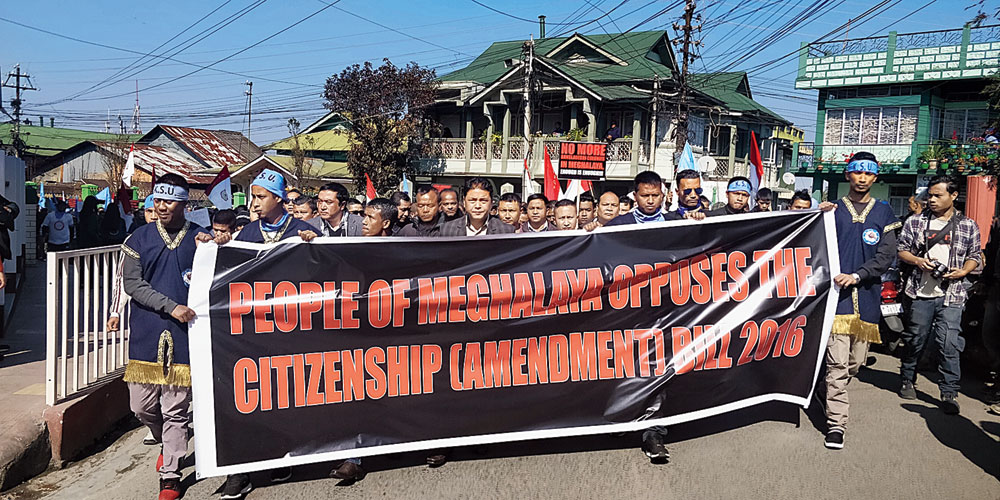 Protest against the Citizenship (Amendment) Bill, 2019, in Shillong. There has been rising concern about the distance that separates India from pluralism: what else can be deduced from the lynchings of Muslims or the BJP's encouragement of the unconstitutional provisions of the bill?
Picture by Andrew W. Lyngdoh
The Editorial Board   |   Published 03.12.19, 08:43 PM

The anti-liberal age — ‘illiberal democracies’ are one of its manifestations — seems to have received yet another seal of recognition. A study by a group of social scientists from New Zealand and the United States of America, whose findings were published recently in the journal, Nature Human Behaviour, has suggested that a discernible lack of tolerance for diversity can end up threatening the heart of a democratic set-up. It may appear that the researchers are stating the obvious. That is because the democratic ideal is predicated upon the principle of inclusion. Minority groups — be they immigrants or homosexuals — should be accorded the highest protection in such polities. But this is not to suggest that the findings are of secondary importance. The timing of the study is perfect: after all, the anti-immigration rhetoric is now shrill across the globe. In India, the Union home minister is fond of calling immigrants ‘termites’. Some of the other inferences that have been drawn on the basis of this laborious academic project that tracked changes in cultural values and their implications for democracy in over 100 countries over several decades help challenge some erroneous assumptions. Democracy, to cite one instance, is believed to be the dominant form of governance. Yet, the social scientists have found that the number of democratic nations rose from 20 in 1950 to only 60 in 2000. It can also be stated with a degree of assurance that a reciprocal relationship binds culture to democracies. The study has revealed that collective receptivity to diversity, mirrored by the cohesive, egalitarian existence of social groups, is a precondition rather than a consequence of the deepening of democracy. This would imply that the weakening of democracy is invariably preceded by erosion in tolerance.

It would be interesting to examine the present situation in India in light of these conclusions. There has been rising concern about the distance that now separates India from pluralism: what else can be deduced from the periodic, targeted lynchings of Muslims or the Bharatiya Janata Party’s encouragement of the unconstitutional provisions of the citizenship (amendment) bill? Another cause of the eclipse of constitutional democracy evidently lies not in this but an earlier research project in 2018 that had declared that secularism has a complementary relationship with a nation’s rising gross domestic product. That could explain India faltering on the registers of secularism and GDP simultaneously under the BJP’s watch.

Selective omission of data on hate crimes from NCRB report

Lynch is a foreign word but lynchistan is impeccably desi