With parts of the Lashkar-e-Toiba being mainstreamed into a political party, the JeM’s importance will, conversely, rise 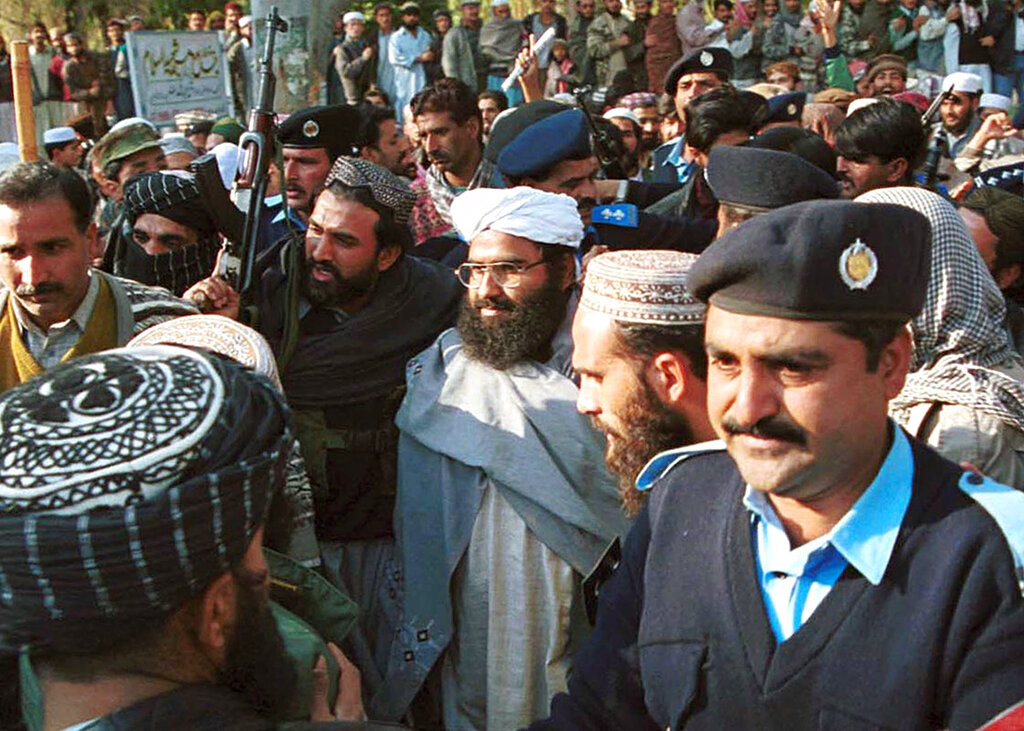 In this January 27, 2000 file photo, Jaish-e-Mohammad leader Masood Azhar (centre, in glasses and white turban), arrives in Islamabad. JeM was quick to take responsibility for the Pulwama terror attack on February 14, 2019.
AP
Anand Arni And Pranay Kotasthane   |   Published 09.03.19, 10:22 AM

Is it a coincidence that the Jaish-e-Mohammad's (JeM) sprawling headquarters in Bahawalpur is just a hop, skip and jump from the Pakistan Army's 31 Corps headquarters? The answer is almost certainly not. Right from the very start, Pakistan's army and the JeM have had a close, almost symbiotic relationship. In all likelihood, the army is close at hand to provide security and to exercise some degree of command and control over the terrorist group.

This close relationship between the army and the terrorist group isn't something new. On the contrary, after Masood Azhar returned to Pakistan, the ISI midwifed the establishment of the JeM and facilitated his fund-raising 'victory' tour throughout Pakistan. The exact reasons why the ISI helped create this new entity are murky but one popular view is that, with the Taliban in power in Afghanistan, the ISI wanted to refocus Deobandi groups behind the Kashmir jihad. A second reason often cited is that the ISI built up the JeM to counter the growing power of the Lashkar-e-Toiba (LeT).

The Pakistan Army plays a major role in deciding the fortunes of the JeM. However, unlike its sister concern the LeT, the JeM has had a tumultuous relationship with its mentors. In 2002, after Pakistan banned it under pressure from the US, it changed its name to Khuddam-ul-Islam. Around the same time, it split into two when three of its top leaders disagreed with Musharraf’s U-turn on Afghanistan and Masood Azhar’s pro-ISI line. The breakaway group (Jamaat ul Furqan) which, at that point, had majority support in the JeM Supreme Council, called for a jihad against the Pakistani state and received support from the al Qaida, the Lashkar-e-Jhangvi and the Harkat-ul-Mujahideen.

Soon afterwards, a series of spectacular suicide attacks in different parts of Pakistan took place during the six months from March to September 2002. The ISI is said to have demanded that Masood Azhar rein them in but he had lost control even though the bulk of the cadre was still with him. Around this time, the Azhar-led Khuddam rebranded itself as the Al Rehmat Trust.

By end-2003, Musharraf banned both factions of the JeM and this resulted in two attempts on his life (December 14 and December 25, 2003). There are reports that the assassins received support from elements within the military and the explosives were traced to an al Qaida camp in the FATA area. The army then cracked down on the rogue elements in its ranks and Masood Azhar and his group, who had by then gone into some form of hibernation, were left intact and allowed to rebuild. This despite the fact that Azhar had also called for Musharraf’s assassination. The rebel group, in 2007, realigned themselves with the Tehrik-e-Taliban.

Similarities and differences between the JeM and LeT

The mission statements of both groups are similar — jihad against the enemies of Pakistan and proselytisation within Pakistan. There are other similarities, both are predominantly Punjabi, with the JeM headquartered in Bahawalpur, Southern Punjab, whereas LeT is based in Muridke, near Lahore. Their religious affiliations are, however, different — the JeM is Deobandi (roughly 15 to 20 per cent of Pakistan's Sunni Muslims) while the LeT follows the Ahl-e Hadith version of Islam (roughly 3 per cent of the country’s Sunni Muslims).

The LeT, over the years, has largely held together whereas the JeM has suffered numerous splits. There are operational differences too — the LeT does not believe in operations on Pakistani soil, nor does it oppose state policy, whereas JeM factions in the past have conducted operations against other tanzeems and even the state. The LeT carries out fidayeen operations where its operatives are prepared to lay down their lives in operations, but suicide missions are not their modus operandi unlike the JeM. In a very broad sense, the JeM uses terror as its main tactic while the LeT functions like a special forces unit which also uses terror.

The present and the future

Masood Azhar is said to be suffering from a renal problem and needs medical attention. He is said to be in a military hospital or a military-run facility which, in all probability, is close to the 31 Corps headquarters. There are some reports of a leadership battle within the JeM and it is Azhar’s brother Abdul Rauf, said to have planned Pulwama and had a role in the hijack of IC 814, who is asserting himself.

In the Pulwama attack, the JeM used a car bomb, which required technical expertise and resources that are outside the reach of the local separatists. Putting together a suicide car bomb requires someone with expertise in explosives, large amounts of explosives and the time and space to spot and motivate a suicide bomber. Also, crucially, it is known that the ISI keeps strict tabs on everyone who has the requisite prowess in putting together a car bomb.

With parts of the LeT being mainstreamed into a political party, the JeM’s importance will, conversely, rise. Though there has been friction between the JeM and the Pakistan Army, the deep state needs the group and a figure like Masood Azhar to attract jihadis who have been used in Afghanistan and are currently unemployed and a potential source of mischief. There will also be cadres from the LeT who have not transitioned into an overground role who need to be accommodated somewhere.

The March 5 arrests of Masood Azhar's son and brother and the banning of a whole clutch of jihadi tanzeems are merely cosmetic workarounds to nominally meet requirements of the Financial Action Task Force (FATF). The high degree of connectivity and interdependence between the JeM and the deep state would suggest that it is foolish to even expect any substantive and meaningful action. Simply put, Pakistan cannot realistically afford to alienate an armed and well-trained Punjab-based group.

Masood Azhar suspected to be suffering from renal failure