What do unicorns mean for the economy? 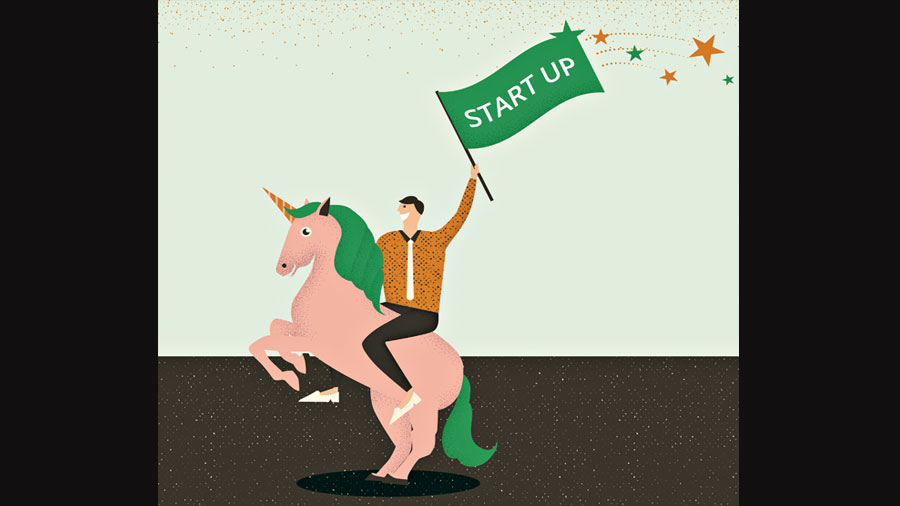 The rise of Indian unicorns — start-ups that reach $1 billion in valuation — has raised hopes of innovation and entrepreneurship-driven growth at a time when Covid-19 has caused much damage. This is not without foundation. Historically, recessions and pandemics are associated with both business failures and successes: natural forces arise from within and upset existing processes and arrangements, replacing these with profit-seeking innovations that increase productivity. This is the idea of creative destruction characterized by the Austrian economist, Joseph Schumpeter. India now has 100 unicorns, according to the investment bank, Credit Suisse; the Reserve Bank of India counts 10 new ones that emerged in 2019, 13 in 2020, while this year, three start-ups became unicorns each month! India hosts the third largest number of unicorns globally, after the United States of America and China, albeit at considerable distance from the former. What is the macroeconomic significance of their emergence?

To be sure, it is difficult to anticipate aggregate outcomes of disruptive forces as impacts are observed over time. The growth pivot expected from the technology-driven transformations is exceptional, although the combined market valuation of unicorns is presently a minuscule share of the total despite robust future assessments by their venture capital investors.

The unicorns are primarily located in consumer, technology, finance, hospitality, retail, and communications — domestic market-oriented services, although some look abroad as discerned from the foreign acquisitions. This contrasts with the emergence of India’s information technology sector nearly three decades ago. That was solely geared towards foreign demand, lifted the global share of India’s services’ exports and stabilized external balances with receipts that partly offset a secular expansion of the goods’ trade deficit. It also triggered IT-enabled, business process outsourcing and related services, created high- and medium-skilled jobs tapping into a vast engineering pool, language and low-wage advantages, and established an ecosystem in Bangalore, the crucible of present-day unicorns. At the same time, its post-2000s boom pushed up skilled-wages premium that fed back to the manufacturing sector, lowering its competitiveness with the steep rise in wages.

The IT example illustrates how structural transformations unleash positive and countervailing forces. The aggregate outcome depends upon how the economy — workers, firms and government — responds to fundamental change. Given the limited export potential, the tech-driven and private equity-financed unicorns will mainly grow through domestic market expansion. Their external competitiveness is unknown, but it is true that their deep-pocketed investors are willing to back losses in the process of gaining market share in India’s large market where they have a long way to go before plateauing.

The competitive interplay between incumbent and new firms will no doubt raise within-sector productivity due to greater efficient use of resources — lesser labour and capital input to produce the same unit of output. Less clear are the inter-sectoral elements of structural change, a process in which the resources spared from less-productive tasks, firms and sectors are redirected towards productive ones. The shift of worker-households or consumers, the firms or investors, and government policy interventions are material in this context. The macroeconomic effects are observed in respective contributions of capital and labour to raise the value of a product (goods or service), which increases the incomes of the owners of these factors of production — profits and wages — that sum up to gross value added, including product taxes, subtracting subsidies yields GDP, growth which measures improvement in living standards. Productivity increase is good for the economy despite increasing slack in some segments in the process.

From a demand perspective, a lot depends on whether digitalization and aggregation of economic activities, which characterize most start-ups, are attracting new or additional consumers to expand the consumer base or shifting existing ones online. The breathless pace of mergers-acquisitions to gain market share indicates this may be more physical-to-online substitution for now. The continuous slowdown in aggregate consumption from 2017-18 supports this conjecture. Even in the pandemic-induced shift to online retail, for example, growth of Indian consumer numbers is assessed to be less-than-half the pace in the US and China.

It follows that fresh and/or existing capacity expansion — investment — will respond to the enlarging of the consumption base. New technologies and applications also activate new investments — for instance in logistics, distribution, warehousing, which are visible. What is unknown though is whether investments are retreating or have altogether stopped elsewhere because they’ve become unproductive or are too inefficient to compete — there’s no significant increase in aggregate investment, which remains unprovoked.

Evidence from the US, the longstanding leader of unicorns, provides some clues. Real GDP grew 2.3 per cent annually on average in 1990-2020; this masks the decadal average growth slowing from 3.23 per cent in the 1990s to 1.9 per cent in 2000-09 and to 2.3 per cent in the recent decade. In this time, unicorns evolved into present-day, big-tech firms whose investment spending outpaces the biggest spenders 20 years ago while their monopoly or near-monopoly positions and tax avoidance practices increasingly attract regulatory and public ire. Notably, productivity growth in the US has slipped below 1 per cent since 2005; the reasons, be it technical change or investment slowdown, are debated. Labour’s share in the national income (wages) has steadily declined, that of profits has risen; so has inequality, while there’s a lasting decline in workforce participation.

Thus, there’s evidence of reduced competition in the long run, but also signs of limits in some spheres, such as the sustenance of the retail giant, Walmart, against Amazon, which is now turning to physical retail, even as many others — clothing and multi-brand retailers — succumbed. Fundamental changes are often also mixed with a myriad other factors impacting growth, eluding identification. The secular stagnation of the US, for example, is attributed to long-term structural forces such as globalization, demographics and technological change.

The examples serve to illuminate that the effects of structural transformations are never straightforward, but non-linear. For India, economic structure, stage of development and timing are equally important — shift from informal to formal activities amidst a severe slowdown could dampen income gains, the relative employment-wealth effects could be misaligned, and so on. These indicate cautious celebration and tempering unicorn expectations.