Military support? Yes. But boots on the ground not the only way 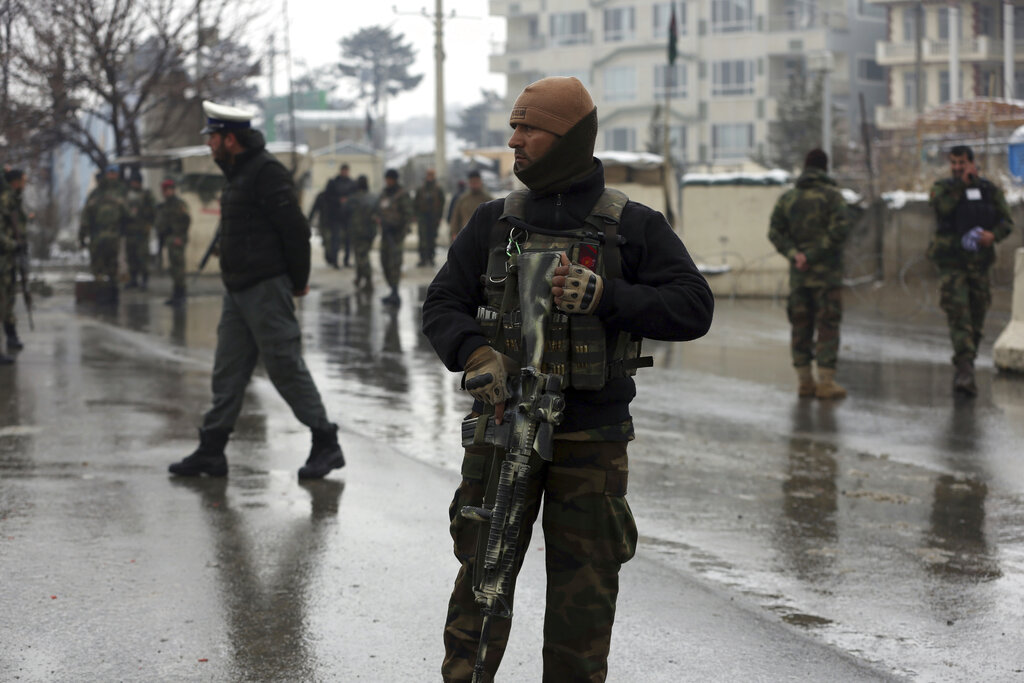 In this Feb. 11, 2020, photo, national army soldiers stand guard at the site of suicide attack near the military academy in Kabul, Afghanistan, A United Nations report says Afghanistan passed a grim milestone with more than 100,000 civilians killed or hurt in the last 10 years.
AP
Anand Arni And Pranay Kotasthane   |   New Delhi   |   Published 23.02.20, 12:29 PM

Praveen Swami wrote in an article that Afghanistan’s National Security Advisor Hamdullah Mohib, during his recent visit to Delhi for the Raisina dialogue, had asked for the positioning of Indian peace-keeping troops in Afghanistan. Harsh Pant also referred to much the same in his commentary for the Observer Research Foundation. It is not clear whether the two are from a singular source, with domestic compulsions in mind, or whether this is a foretaste of what Trump would talk about when he comes to Delhi next week. This news was, however, promptly denounced as “fake news” by the spokesman of the Afghanistan’s National Security Council on Twitter.

This discussion over positioning of Indian troops in Afghanistan is more than a decade-old. The rationale being that an Indian military involvement in Afghanistan will shift the battleground away from Kashmir and make the Pakistani military-jihadi complex divert its resources towards the Durand Line. However, this argument has not been able to find much traction. A number of strategic, logistical, and historical reasons have been put forward over the years in opposition to this bold idea. The renewed request, attributed to Mohib, means we have come a full circle. So, should India revise its approach given a significant context shift?

We think so, but not by putting Indian troops in Afghanistan. With the US withdrawal after an agreement with the Taliban on the cards, bolstering anti-insurgency institutions should take primacy over economic development projects from the Indian side. Here’s how.

The Trump administration has made up its mind on decreasing its presence in Afghanistan even if that means a meaningless “reduction in violence” agreement with a terrorist group. Apparently, the US will scale down its presence in Afghanistan in return for security guarantees by the Taliban to the effect that it will not allow terror groups to operate against US interests. To give any serious consideration to guarantees by a terrorist group that it would not support other terrorist groups indicates incompetence, short-sightedness, or both.

A known terrorist such as Sirajuddin Haqqani writing op-eds for The New York Times is just another indication of the changing narrative in the West on the Taliban. Going by this trend, we might just see a Taliban leader on the cover of The Economist once the US brings it into a power-sharing arrangement with the Afghan government. In short, the US is not interested in taking on this element of the Pakistani military-jihadi complex. The request for Indian troops should be seen in this renewed geopolitical context.

Meanwhile, India’s interests in Afghanistan haven’t changed. India hopes to build up Afghanistan’s state capacity so that Pakistan’s desires of extending control can be thwarted. Given this core interest in a changed political situation, what’s needed in the long-term in the security domain is to build the strength of the Afghan National Defense and Security Forces (ANDSF). Without a strong ANDSF — which comprises the army, police, air force, and special security forces — peace and stability in Afghanistan will remain elusive. India’s aim should be to help the Islamic Republic of Afghanistan and ANDSF claim monopoly over the legitimate use of physical force.

Indian paramilitary soldiers stand guard in a closed market area during a strike on the death anniversary of separatist leader Maqbool Bhat in central Srinagar, Kashmir on Tuesday, Feb. 11, 2020.
AP

Any analysis looking at India’s military options in Afghanistan should thus start with an identification of the challenges faced by the ANDSF and how India can pitch in to meet those challenges. A study conducted last year by the Combined Services Transition Command-Afghanistan (CSTC-A) — a US-led multinational organisation charged with the planning, programming, and implementing reform of the ANDSF — identified ten challenges being faced by ANDSF. Counterintuitively, this study brings out the fact that the biggest challenges faced by the ANDSF are related to the decline in the quality of human resources at hand rather than the shortage of financial resources.

For example, the study found that the top-most challenge is that the ANDSF lacks “strong, effective leadership across their formations”. Further, it “lacks standardised training at the national and regional level”. This is clearly a subject where India enjoys a comparative advantage. Conducting training courses on Afghan soil, and in India, could address these problems. Training on Afghan soil could be specially constructed to suit Afghan requirements. This would require smaller units and teams being sent to Afghanistan on rotation.

Next, the study highlighted that over half of ANDSF casualties result from checkpoint attacks and happen when the Taliban are engaged in resupplying. Our own counterinsurgency experience in J&K and the Northeast gives us a good feel of what is essential for a security grid and in bottling up an area. India can effectively train the Afghanistan National Police (ANP) to foil such attacks.

The CSTC-A report also found out that ANDSF infrastructure facilities are routinely in disrepair, impacting morale, health, and safety of the ANDSF. This again is a low-hanging fruit for India. An inspection team drawn from our logistic and support services — Army Service Corps (ASC), Electronics and Mechanical Engineers (EME), etc. — could examine the status and provide training to Afghan personnel in repair and maintenance.

In short, the budget might itself not be the biggest issue. The US has pumped nearly $3.6bn on average every year for the last 19 years solely on reconstruction of the ANDSF, a support that is likely to continue even if the US withdraws its soldiers. The bigger problems are insufficient processes to plan and execute budgets resulting in unused funds and lack of infrastructure leading to pay shortfalls.

Sending Indian forces might help resist the Taliban in the short-term but sending a division-level force is not going to enhance the strength of the ANDSF along the dimensions mentioned above. There are new supply-side constraints as well. India’s neutral credentials have suffered as a consequence of the recent steps taken by the government on the Citizenship Amendment Act which are viewed as anti-Muslim (and, to some extent, as anti-Afghanistan). Religion is an emotive factor and Pakistan can be expected to stoke these emotions. At the end of the day, the Pakistani narrative will be that a Hindu army is occupying Muslim lands.

Finally, we need to appreciate that India must extend military support, but having boots on the ground is not the only way to do that. India must explore other options that can make the ANDSF an even more effective force.

Anand Arni, former special secretary with R&AW, and Pranay Kotasthane are with the Takshashila Institution, an independent centre for research and education in public policy.