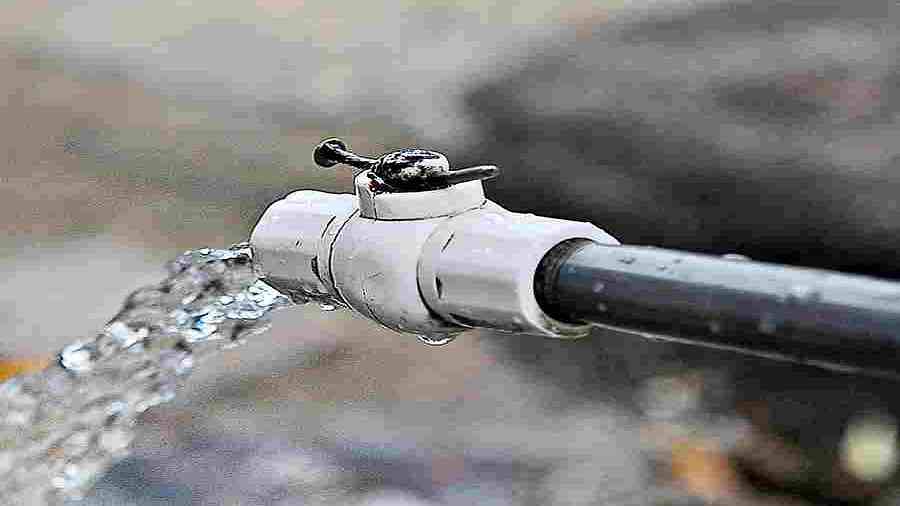 Growing up in the Sixties in Kashmiri Gate, an old Delhi neighbourhood inside Shahjahanabad’s city walls, I don’t remember the taps in the house ever running dry. The fittings in the bathroom were rudimentary — no shower, no washbasin, just a tap sticking out of the wall and a drain grate — but it had that useful thing, water. Roofs, verandahs and cars were sluiced down leisurely with the garden hose. For middle-class Delhiwallahs, piped water wasn’t a thing: it was a natural element, like air, free and unlimited. When my family moved to a house in a government neighbourhood in Moti Bagh just by the Ring Road in south Delhi, we learnt to do as the natives did: fill two buckets of water in each bathroom before 11 in the morning before the municipal water supply stopped. It resumed around four in the evening, but we needed those buckets for the untimely bath or to flush with. But even this interrupted supply was, in retrospect, a form of riches. Not only did water flow at the appointed times, it came with such force that it forced itself into the taps on the first floor, unaided.

Sometime in the early Seventies, roofs acquired a novel fixture: the square water tank. This was the modern citizen’s elegant solution to filling buckets. Stored invisibly on the roof, water could be made to flow into cisterns, geysers and showers. Historically, the supply of water in Delhi is inversely related to the number of bathroom fittings designed to receive it.

When municipal water supply declined, Delhi’s bungalow elite sank borewells in their backyards. Over the decades, the depth of the boring has become a form of urban nostalgia. ‘I struck water at thirty feet, in 197’ is a staple of this city’s conversations. An urban legend related to this memory is that a metro was proposed for Delhi in the Sixties but the subsoil water was so high in this Yamuna-fed city that it was rejected as impractical.

As the water table plummeted and borings ran dry and the water pressure of the municipal supply dropped, this resilient middle class excavated underground water tanks in those same backyards. Since the municipal supply trickled in too feebly to climb into the tank on the roof, it could now be trapped and stored in the sump and then forced up by an electrical pump.

This was around the time that the giant, cylindrical, fifty-foot-high concrete water tanks that were intended to collectively store water for the colony and use gravity to distribute it to the neighbouring houses became obsolete. You can still see them in some places, looming over a scrubby park, pharaonic monuments to futility. Some urban archaeologist centuries from now will wonder at the culture that raised them.

The plastic Sintex water tank and the Crompton pump are, or should be, emblems of Indian modernity. Sadly, there came a time when even sump and pump failed to do their jobs. At this point, enterprising citizens decided that they could get more than their share of water if they directly tapped the municipal line by putting a pump on it.

This was both completely illegal and magically effective till such time as other people did it. This form of zero-sum thinking comes naturally to the Delhiwallah, so in time everyone tapped the municipal line. This meant that we got the same amount of water as we had before the Great Tapping, but we were content because stealing water gave us a sense of agency; it was better than the passivity of just waiting for our share to arrive.

Also, unlike Calcutta’s shabby, genteel  bhadralok, Delhi’s aspirational citizens relish the opportunity to outmuscle the competition, in this case their neighbours. The caretaker of the four-floor house to our right had bragged that he never needed a tanker, thanks to his one-Horsepower pump. His neighbour on the other side called his bluff and raised him: he installed a two-Horsepower pump. In the middle of the night, when the water arrives and the pumps come on, the neighbourhood thrums like an airport.

The technological fixes to this elemental absence of water grow ever more fantastically elaborate. The tap on the municipal line can be accessorized with a sensor that automatically turns on the pump when it detects water. The alternative is to set a sequence of alarms and wake up at designated hours of the night (which, for some perverse reason, is the time of day that the municipality deigns to supply water) to manually turn on the pump. Also, the trickle in your washbasin can be fixed by a pressure pump that senses a tap being turned on, springs to life, and forces water out with such foaming violence into your shaving mug that, briefly, you feel you’re communing with a firstworld faucet.

Sadly, it is a truth less than universally acknowledged that the illusion of piped water can’t be sustained without water. No matter how powerful the pump or deep the sump or alert the sensor, if the Yamuna runs dry and the water level in the Wazirabad pond plummets and the Ganga Canal silts up and the Nangal channel is blocked and the monsoon is delayed and the glaciers retreat, we’re screwed. Nothing that we do, short of radically reducing our consumption of water, will help and even that might not be enough.

Currently, the illusion of urban modernity has been shredded in South Extension where I live because we spend the day leaning over our gates waiting to hear the blessed sound of trucks physically transporting water to our door. ‘Tanker aa gaya!’ is the cry and we rush out to help the driver fix his hose and unroll it till it lips over the gaping maw of the underground tank and then watch the precious fluid gout into the echoing emptiness. We haggle with him as he turns off the tap because he has other tanks to top up. All human sociability dissolves as we fight like ferrets over water.

When I was a child (around the same time as those Kashmiri Gate taps bubbled with water), I saw P.C. Sorcar perform. The nadir of his act was the bit where he ostentatiously emptied a pitcher of water and set it down. Then he raised it up again and tilted it and, lo, it poured again. ‘Water of India!’ he said each time, till you wanted to scream. I’ll take that pitcher now. Where are your magicians when you need them?