Advertisement
Home / Opinion / War over soup: Editorial on UNESCO according the borscht soup to Ukraine

War over soup: Editorial on UNESCO according the borscht soup to Ukraine

While Kyiv celebrated the move, Russia’s foreign ministry spokeswoman described it as ‘xenophobia’ 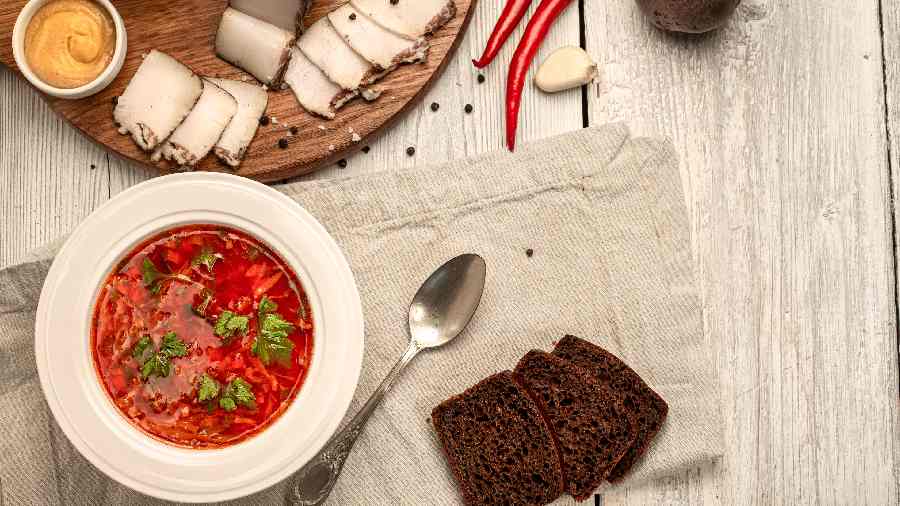 History and territory are not the only things Russia and Ukraine are fighting over. Last week, Unesco added the Ukrainian preparation of the beetroot-based borscht soup — whose variations are popular across eastern Europe — to its list of endangered cultural heritage. Moscow promptly saw red. The UN agency said it had expedited the decision process because of Russia’s war against its smaller neighbour and the threat that it posed to the tradition of making borscht in Ukraine. But while Kyiv celebrated the move, Russia’s foreign ministry spokeswoman described it as “xenophobia”. Battles over food, drinks and culture — from claims on their origins to assertions over who is best at them — between nations are hardly new. Yet it is rare for the UN and its agencies to openly take sides in such a manner. The list that Ukraine’s preparation of borscht was added to is meant to highlight threatened cultural traditions in the hope of channeling support for their preservation.

At a time when Ukraine is under attack, its heritage — from its museums to historic architecture — is indeed under direct threat. Many churches have been bombed. It is vital that Unesco works with local groups and the governments in Kyiv and Moscow to preserve and rebuild this damaged legacy. But the agency’s emphasis on promoting a national identity for a soup that, in some ways, unifies a region is more questionable. Most neighbouring nations — and indeed regions within a country — share overlapping cultural identities of food, clothing and language that simultaneously serve as sources of gentle rivalry and fuzzy familiarity with each other. Would it make sense for either India or Pakistan to claim the salwar kameez as its unique heritage? Can the debate over which biryani is the best among those from Calcutta, Lucknow, Hyderabad — or the dozens of variants within Tamil Nadu — ever be settled? And is one-upmanship helpful? Is not the diversity of options, each with its special flavour and preparation, what truly makes a cultural landscape rich?

To be sure, it is important to guard against cultural appropriation. It is natural for South Koreans to feel concerned when China starts claiming  kimchi. It is also critical to ensure that traditions and heritage are not stolen from where they originated for profiteering elsewhere. It was correct of India to fight a legal case — which New Delhi won — to overturn a patent issued in the United States of America in the 1990s for the use of turmeric for medicinal purposes. But protecting the free use of traditional knowledge is not the same as insisting that it belongs to any one country — a farce that played out before Unesco in 2018 when Singapore and Indonesia bickered over whose street-food hawkers deserved recognition. Shared culture should instead be highlighted as a reminder of common roots, acting as a balm in a world that — between wars, a food crisis and a floundering economy — is already in a soup.