Advertisement
Home / Opinion / The time is ripe for unity

Over 1.5 lakh farm and industrial workers walked together in Delhi on September 5, not because no one thought of it sooner, but because the conditions have now been created to prompt it 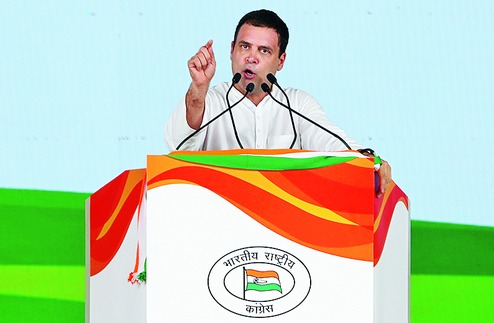 On September 5 an event of great significance occurred in the capital: more than 1.5 lakh workers, peasants and agricultural labourers staged a rally on Parliament Street. The capital has certainly seen much bigger rallies in the past, but not in the recent past. In fact, one had almost forgotten the Boat Club rallies of yore, and come to believe that a new era had come when, notwithstanding great hardships, people were reluctant to hold mass demonstrations, at least along class lines.

The September 5 rally was significant not just for removing this impression; it brought together for the first time in post-Independence India three distinct classes, the workers belonging to trade unions, the peasants organized under the Kisan Sabha, and the agricultural workers belonging to a different union altogether. There have been separate rallies of workers and of peasants earlier, but never a joint rally, and certainly not one that included agricultural workers.

Since all three main unions that organized the rally are linked to the Communist Party of India (Marxist), their coming together may be seen merely as a central political decision. But the fact that this happened only now, and had never happened before, is not because the idea had not occurred to anyone before, but because conditions have now been created for such unity which did not exist earlier. Under the neoliberal regime in India the interests of workers and peasants have got directly linked in a manner that is altogether unprecedented.

Traditionally, the interests of peasants, who want higher prices for their produce, are seen to go against the interests of workers, who get hurt by such higher prices; their money wages being sticky, higher prices, especially of foodgrains, lower their real wages. In Britain in the early 19th century, the workers and the industrial capitalists had come together to demand a repeal of the Corn Laws so that cheaper food could be imported. (There, of course, the peasantry had virtually disappeared by then, and lower grain prices were opposed by landlords, so that the contradiction was different; but it illustrates the nature of the problem). In India in the late 1960s and early 1970s, rising food prices (under pressure from the surplus farmers and landlords) had led to a squeeze on the real wages of the urban workers, resulting in a spate of strikes, culminating in the Railway Strike of 1974, and foreshadowing the Emergency.

By contrast, during the Great Depression of the 1930s when the peasantry was hit by a price-crash for its produce, the real wage rate of industrial workers in India had increased, according to K. Mukerji's article in V.B. Singh edited Economic History of India 1857-1956. Given this direct conflict of interest between the two classes (although, as Lenin had argued, there can be a political alliance between them against the coming together of bourgeois and landed interests), how can one explain their joining hands, as evident from the Delhi rally? In particular, how can one explain the fact that one of the 15 demands of the rallyists, the majority among whom were workers, was for higher procurement prices for peasants' produce, including food crops?

A part of the answer is obvious. Because of our procurement-cum-public distribution system, the government interposes itself between the workers and the peasants. The procurement price can be raised for the peasants, without the workers being in any way adversely affected, if the government keeps the issue price unchanged in the PDS, and covers the difference through a larger food subsidy. Thus the peasants and the workers do not directly face one another in the market, not even with just a set of private grain traders between them.

Indeed, the whole purpose of the procurement-cum-public distribution system was twofold: to eliminate price fluctuations which hurt producers through price crashes and consumers through price-spikes; and to ensure that the producers get a fair price for their crops without the consumers being adversely affected by it, through the State interposing itself between the two with appropriate subsidies. Workers demanding higher procurement prices for the peasants becomes possible within this arrangement.

But there is more to it. For any given issue price, a lower procurement price for the peasants (and hence a lower food subsidy and fiscal deficit) squeezes their incomes, and increases their distress, forcing many to migrate to urban areas in search of employment. Such employment not being available, they only swell the ranks of the unemployed and the underemployed, or what Marx had called the "reserve army of labour". This weakens the bargaining power of the employed, and even unionized, workers, resulting in a fall in their real wages via this avenue.

Of course in India we increasingly have a situation where the binary, employed-unemployed, or active army-reserve army, ceases to exist. Employment rationing takes the form of most people remaining unemployed for some time, rather than some remaining entirely unemployed and others entirely employed. This occurs through phenomena such as casual employment, intermittent employment, part-time employment and 'petty entrepreneurship', which is a form of disguised unemployment, and a growing reserve army in relative terms simply means an increase in these forms, as well as reduced employment within each such form. This fact, however, does not alter our argument, namely, that peasant distress increases the relative magnitude of the reserve army of labour and pushes all workers into greater impoverishment as well.

Under the neoliberal regime there has been a persistent squeeze on petty production, and on peasant agriculture in particular, through a progressive withdrawal of State support from this sector, through its exposure to world market price fluctuations, and through greater inroads into it by the corporate sector and multinational agribusiness. One manifestation of this squeeze is the suicide of more than three lakh peasants over the last two decades; another manifestation, less well-known, is that 15 million peasants have left farming between the 1991 and the 2011 censuses.

These displaced peasants have increased the relative size of the reserve army of labour. Employment growth ('usual status employment' which is a better index of employment than others) even in the years of extraordinarily high gross domestic product growth, such as 2004-05 to 2009-10, has fallen well behind the natural rate of growth of the non-agricultural workforce itself; the question of absorbing displaced peasants simply does not arise.

Not surprisingly, the real wage rate of factory workers, namely those in establishments employing 10 or more workers with power or 20 or more workers without power, as revealed by data from the Annual Survey of Industries, was marginally lower in 2012-13 than in 1990-91; and this occurred in a period of rapidly rising labour productivity.

The prospects of a worker-peasant alliance against neoliberalism and the destitution it inflicts on the working people become brighter in this context. The Delhi rally testifies to this fact.