Their achievement is a great precedent for elections in the future, as more voters will feel encouraged to see women in positions of power 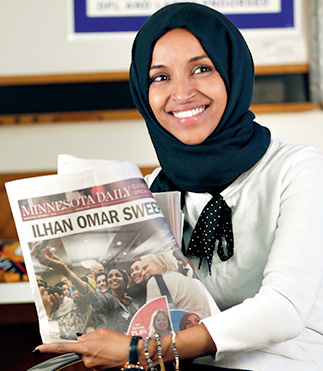 Democrat Ilhan Omar, who will be the first Somali American and one of the first two Muslim women to serve in Congress
Jim Mone / AP
The Telegraph   |   Published 13.11.18, 10:36 AM

Sir — It is a matter of pride for the United States of America and, indeed, women all over the world that a record number of women have entered the US Congress after the midterm elections (“March of the first ladies”, Nov 8). This sets a great precedent for elections in the future as more and more voters will feel encouraged to see women in positions of power. This is especially important when it comes to governance and policymaking, as women are the ones best suited to formulate laws on women’s rights. I have special respect for Ilhan Omar, the Somali-American politician who belongs to the Minnesota Democratic-Farmer-Labor Party and is one of the first Muslim women to have been elected to Congress, and Alexandria Ocasio-Cortez, the Democratic Party activist who, at the age of 29, is the youngest Congresswoman.

Sir — The results of the US midterm elections ought to be celebrated by women and minority communities in the country as their representation among policy-makers increased. Even though Native Americans are the original inhabitants of the US mainland and white settlers arrived there much later, the interests of the former were hardly represented at the policy level.

Now, the Democrat from the state of Kansas, Sharice Davids, has become one of the first Native American women to be elected to the US legislature. This is a huge victory not just for her community, but also for the women who are part of it. The progress of women like Davids must be celebrated.

Sir — The women who won the midterm polls in the US must be lauded — especially by men — for their stupendous achievement. They fought against all odds and biases to be where they are today. A number of the women who are now in Congress belong to the Native American, LGBTQ and Muslim communities — minorities that have faced untold atrocities in the US. It is time for their male counterparts as well as the male voting populace of the nation to recognize the worth and ability of these women to serve the American people justly and ably. I look forward to witnessing the good work they do.

Since the world always judges women more harshly than men, they might feel an added pressure to perform well, a pressure that male politicians in the US rarely feel. This is an unfair load to put on the shoulders of women who are always dealing with societal and cultural biases. Not only must the American people look to them for hope, but they should support these incredible women as well.

Sir — The news that many women, some of whom belong to racial, religious and sexual minorities in the US, won seats in the midterm polls, was heartening. One hopes that more voters in India will give women leaders here a similar kind of respect, and that the two Houses of Parliament will, in the near future, have a far more sizeable number of women parliamentarians.

Sir — The tallest national flag monument in the Northeast and the third-tallest in the country, which stands at the Gandhi Mandap in Guwahati, has reportedly been damaged soon after its unveiling. It was supposed to boost tourism in Assam. However, it looks like this project, on which crores of rupees were spent, was a failure. The tricolour has suffered a tear already. Why has damage occurred so soon after the unfurling of the flag? Is it the result of the ignorance of those who worked on the project or just ‘high wind pressure’?

Whatever the reasons might be, the fact of the matter is that a huge amount of money was squandered, and now another large sum is likely to be spent on replacing the torn flag. This does not bode well for the economy of the state. All of that money could have been put to better use, like improving medical and sanitation facilities, repairing potholes, and even on education. The government should pay heed to what the immediate needs of the state are.

Sir — The huge tricolour in Guwahati, which measures 120 x 80 feet and flies atop a flag pole that is almost 320 feet high, was unfurled by the Assam chief minister, Sarbananda Sonowal, on the occasion of Gandhi Jayanti this year. It cost nearly Rs 3 crore to set up, and is already damaged. One wonders how long it will take before defects are also found in the statue that was recently unveiled in Gujarat.

Sir — Bhai Phonta or Bhai Dooj is similar to Rakshabandhan. Sisters pray for their brothers’ long lives and brothers vow to protect their sisters. However, I do not understand why only men are considered to be capable of providing protection. Elder sisters, for example, are the ones who keep their younger brothers from harm; should not the brothers, then, be praying for the long lives of their sisters? If the festival is about celebrating the bond between siblings, then young boys and girls should be performing the ‘phonta’ ritual on their elder sisters as well. That would lend a dimension of logic and equality to the festival.