THE THIN EDGE | The emperors of nakedness 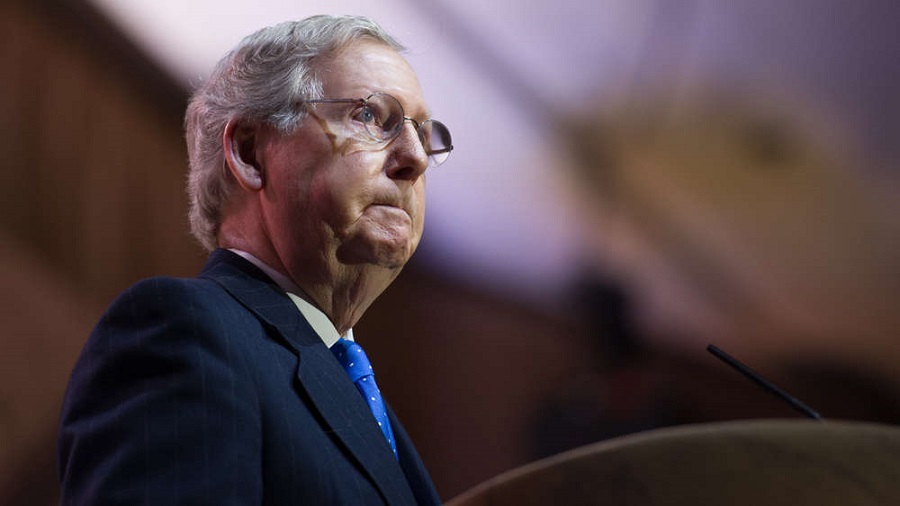 There is a pithy Gujarati word that keeps coming to mind while observing recent political events. That word is 'nagai'. Nagai (pronounced naa-gai) has, as its root, the Sanskrit word for naked which is 'nagna', which often becomes 'nanga' or 'naga' in other languages. The Gujarati nagai, however, does not refer to physical nakedness but to the divestment of all moral or ethical covering, a naked brazenness, a shameless public display of criminal impunity.

One good example of this is the US Senate majority leader, Mitch McConnell. When a judge of the Supreme Court of the United States of America died in 2016, the then president, Barack Obama, used his prerogative to nominate Merrick Garland as replacement. A nomination for the US Supreme Court needs to be examined and passed by the US Senate and, unless the nominee is highly controversial, this is usually a formality. Now, the Republicans under McConnell have a majority in the Senate and McConnell with the help of his Republican colleagues refused to hear Garland’s nomination for one whole year, effectively nullifying it and allowing the newly-elected Donald Trump to put his choice on the bench in 2017. McConnell’s argument, absurd and unprecedented, was that Obama was in his last year as president, a lame duck, and the new judge should only be appointed by a freshly-elected president. Taken to its logical conclusion, this argument essentially maintained that a president, although elected to govern for a full four years, had no right to make any executive decisions in the last year of his term. McConnell’s was a partisan, political street thug’s manoeuvre, damaging to his country’s Constitution and democratic structure while setting a terrible precedent, but it was technically within the bounds of the law; Obama had no legal recourse; there was nothing he could do to force the Senate to examine his candidate and vote on him.

Cut to last week. Ruth Bader Ginsburg had hung on as a Supreme Court Justice despite terrible health (US Supreme Court justices are appointed for life unless they themselves choose to retire) to prevent Trump from appointing yet another reactionary, right-wing judge in her place. She was striving to stay on till the next (hopefully Democrat) president was sworn in, but it was not to be. In 2016, McConnell had argued vociferously that a president despite having one full year to go on his term should not get to appoint a new Supreme Court judge. In 2020, with only two months to go till the presidential election, McConnell has declared he is eager to fast-track any Trump nomination through the Senate in order to capture the precious seat on the Supreme Court bench. Here, the Senate majority leader is showing his nagai spectacularly, yet unsurprisingly.

Earlier this year, when the US Congress voted to impeach Trump and sent the matter up to the Senate, McConnell and his pals buried the impeachment without even the pretence of fairness: they cancelled the case without allowing any witness to testify before the Senate. Normal procedure would have meant the witnesses would have testified, laying out the substantial case against Trump, after which the Senate, with its Republican majority, could still have acquitted their man. But this would have been politically costly; the public would have heard the witness testimonies and the senators voting to absolve Trump of allegations of serious crimes would have been exposed, further disrobed of their ethical pretensions. Better then to deploy a containing nagai and hope the public would forget about the whole thing in a few weeks’ time.

Witnessing all this, one is reminded of a famous analogy deployed by Narendra Modi when he was chief minister of Gujarat in early 2002. When 59 people died in a train fire allegedly set off by hooligans from a minority community, the seemingly pre-planned retaliation by the majority community took an awful toll on innocent people from the minority community all over Mr Modi’s state. Asked about the mass violence, arson, deaths and rapes inflicted on the minority community, our current prime minister had then famously quoted Isaac Newton: ‘Every action has an opposite reaction.’ He implied clearly that since members of the minority community had started the fire, it was no surprise that the community got badly burnt.

In the case of Mitch McConnell, this rule of kriya-pratikriya means that if the Democrats win the presidency and take control of the Senate (neither of which is an outlandish projection) to add to their majority in the Congress, they will feel licensed to do things that would otherwise have been legal but morally out of bounds. One of these is to quickly vote to expand the Supreme Court bench from the current 9 to, say, 15, and fill the new seats with young and robustly healthy liberal judges who would tilt the balance of the bench from 6-3 in favour of conservative Republicans to 6-9 in favour of progressive lefty judges whom one could perhaps call Baderites in memory of the recently departed great woman. On top of this, it might be possible to get into impeachment proceedings against Brett Kavanaugh who had serious allegations of sexual misconduct swatted aside at his confirmation hearings when he became Trump’s second appointment to the Supreme Court. As for the Emperor of Nakedness himself, a successful impeachment and ejection from the White House might have been seen as punishment enough, but now a new administration and justice department may find it has the public support to investigate and prosecute Trump, not least to set an example that using foul means to attain power and using that power in a foul way can be rewarded with a long jail term.

Closer home, perhaps we should attach another famous axiom to the Newtonian one unfurled by Mr Modi in 2002. Many (including this writer) have quoted the line from Michel Foucault before and many will paraphrase it again: ‘every exercise of power comes with a cost.’ It’s a line and an idea that should be drummed into every politician in government; into every Speaker who rides roughshod over a proper vote; into every bent policeman who obeys illegal orders and goes after the opponents of his political masters rather than criminals who, standing next to the cops, declare their intention of causing mayhem before actually doing so; into the operatives of every investigative agency who chose to behave like the private militias of the people in power rather than guardians of law and order and the Constitution; into every uniformed man who makes a malicious arrest and then uses bad laws to punish the arrested by keeping them in jail rather than producing them in a fair court; and into every judge from the lowest courts to the highest benches in the country. To repeat: Every exercise of power has a cost, every nagai and misuse will have a cost, not just to others but to you, every corrupt or mala fide action will incite reactions that will come and bite you back in nasty ways that you cannot foresee.