The road ahead for India 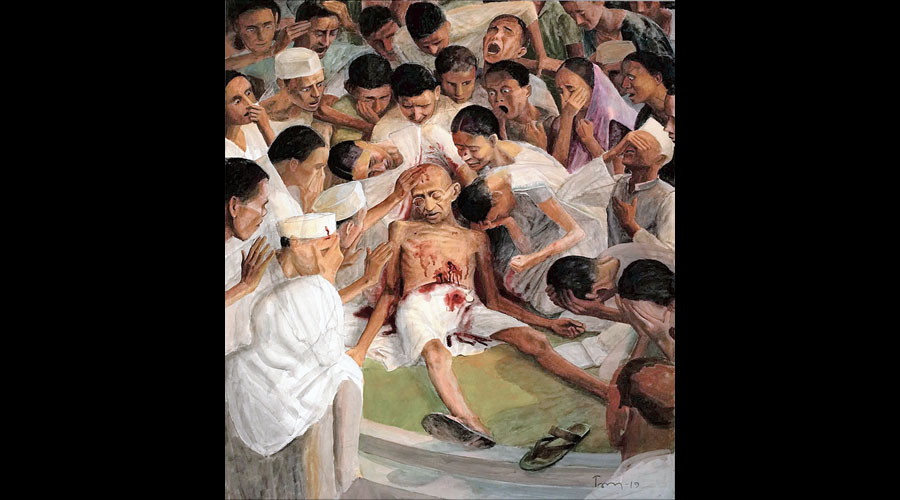 Every year, January 30 brings back memories of a history that has shaped the destinies of billions. In India, one is normally not aware that it was on January 30, 1933 that Adolf Hitler was formally appointed as chancellor. The idea was to give the Nazis, who were not yet a majority in the Reichstag, some space in order to keep the German government going. We know the tragic aftermath that followed. Fifteen years later, on the same date, forces in India who were believers in Hitler’s ideology of Aryan supremacy assassinated Mahatma Gandhi. The years of the Nazi surge in Germany were also the years of the formation of the Rashtriya Swayamsevak Sangh. Eleven years before Hitler acquired power in Germany, Benito Mussolini had flexed muscles using his ‘black-shirts’ — the squadristi — to wrestle power and let loose violence on his opponents. That was the time in India when Gandhi took over the command of the Congress after the generation of Lala Lajpat Rai, Bal Gangadhar Tilak and Bipin Chandra Pal declined. He made non-violence the mainstay of India’s struggle for swaraj. Within months of Gandhi becoming the president of the Congress in 1924, the RSS was founded in 1925. Was that a mere coincidence, or was that an invitation for India to choose between violence and non-violence as its path towards self-hood?

The years of the rise of fascism in Europe had their corresponding local trajectories in India. In a town in south Maharashtra, a college drop-out had returned home looking for ways of survival. The town was Sangli; the young man was K.B. Limaye. In 1932, K.B. Hedgewar and Babarao Savarkar, two of the RSS’s founders, went to Sangli and spent three days with Limaye to get him involved in the RSS, which, till then, had remained confined only to Nagpur and its surrounding areas. Limaye became the sanghchalak of the shakha in Sangli. Two years later, he was made the head of the shakhas in Maharashtra, with Pune as his headquarters. During these two years, another young man had moved to Sangli. He had spent a short time in Ratnagiri earlier, where Savarkar was stationed and a couple of years in Itarsi doing odd jobs. In Sangli, he opened a tailoring shop called Charitarth Udyog — a livelihood enterprise — and joined the RSS. This was Ramachandra Godse, known in history as Nathuram. After Limaye moved to Pune, Godse did so too. In 1934, the first summer camp of RSS was held in Pune. The military-like drills had by then become the standard initiation procedure in the RSS shakhas. The propagation of a Hindu nation had become its standard ideological plank.  The military-like uniform was made compulsory for its members and Godse found plenty of tailoring work. Besides, he found space for acting on an ideology he had imbibed. Throughout the 1930s and the 1940s, photographs of Hitler were distributed in Pune, Nasik, and Nagpur and in the small towns surrounding these cities.

The last attack on Gandhi was made in 1948. Narayan Desai, the son of Gandhi’s life-long secretary, Mahadev Desai, who died in prison in 1942, has written probably the most authentic biography of Gandhi. Published soon after the Gujarat riots of 2002, its first edition was sold out in the first few days and was reprinted several times over. Its English translation by Tridip Suhrud, My Life is My Message, started appearing when the Gujarat Model was eyeing the Delhi block. I draw upon Desai’s description of the last day in Gandhi’s life. Gandhi, in his 78th year, is tired and frail after a long fast, surviving on only a small quantity of food, pained at heart by the violence and hatred in which the country was plunged. He wakes up at 3.30 am, wakes up others, and they say their prayers on the veranda of Birla House. He asks someone to sing a line from a song that went like ‘Rest not, even if tired and weak’. He then gets down to writing letters, one of which is to a Kishorlal Mashruwala, who had lost his wife. He writes, “Death is a true friend. It is only our ignorance that makes us to grieve.”  A day earlier, he had said to Manu, “If I die while going to prayer and a man comes face to face and fires bullets at me, which I accept in my chest, with the name of Rama on my lips and if my mind is free from all hatred for the killer, tell them that he was a true devotee of God.”  He is thinking not just of death but also of the continuation of life. He had given Pyarelal a draft constitution for re-organizing the Congress. The five principles along which he desired the Congress to be reconstituted revolved around the need of an organization like the Congress that has to fight for attaining “social, moral and economic independence” for seven lakh villages. He wants it to be renamed as the Lok Sevak Sangh. He is keen on bringing on board socialists like Jayaprakash Narayan and Narendra Dev for strengthening the spirit of socialism. He then meets visitors. The last among them is Sardar Patel, who spends an hour with Gandhi prior to the prayer meeting. Gandhi is keen on ensuring that Patel and Jawaharlal Nehru work together as they had done during the decades of the Independence struggle. Ten minutes late for the prayer ground, at 5.40 pm, he walks, supported by Manu and Abha. A man pushes himself forward from the crowd of a few hundred present and pulls Manu’s hand. The rosary, spectacle case, notebook and pen that she is carrying for Bapu fall on the ground. Then the bullets are fired. ‘Hey Ram’. Raghu Mali of Birla House overpowers the assassin. In the police station, he tells his name (Nathuram) and gives his address (Pune) and age (25). Godse was 37; he had wanted to kill Gandhi from the age of 25.

We are now a century from the time Mussolini produced the version of fascism based on violence and Gandhi offered the way to social harmony based on non-violence. It has been a century since Hitler proposed that the pursuit of power justifies lies and intimidation of innocent citizens. It is a century since Gandhi spoke of truth as a mode of moral action. It is time for India to decide if it wants social harmony and human dignity or hatred, scorn, violence and pride for a false vision of ethnic purity. January 30, every year, is a reminder of what our choices are. India needs to decide.