Advertisement
Home / Opinion / Tweeting discord: One of the BJP's strengths is being bullishly bullying online

Tweeting discord: One of the BJP's strengths is being bullishly bullying online

The BJP's recent tweet builds upon its patient, planned campaign to create a religious test for citizenship 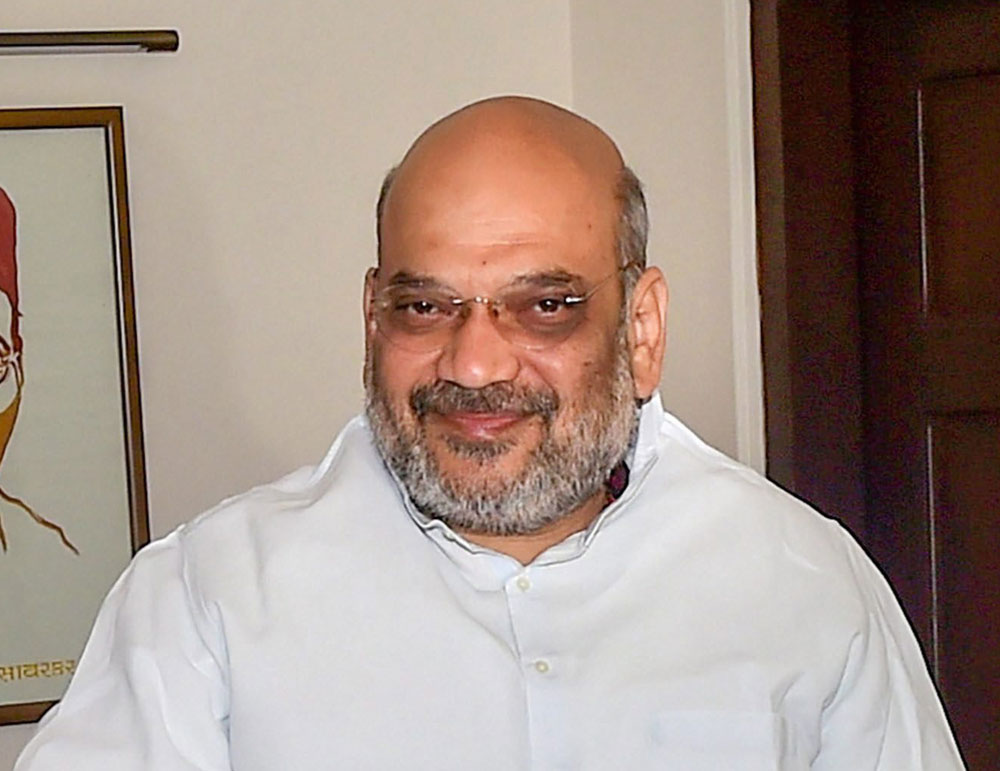 Recently, @BJP4India tweeted, quoting Amit Shah: “We will ensure implementation of NRC in the entire country. We will remove every single infiltrator from the country except Buddha, Hindus and Sikhs"
(PTI photo)
Mukul Kesavan   |   Published 14.04.19, 02:31 AM

Time was that general elections had India collectively holding its breath... then exhaling. Parties campaigned furiously, there was a mandatory two-day lull on election eve and then everyone (or nearly everyone) voted together. With the normalization of multi-phase voting, we don’t so much hold our breath as breathe shallowly for a month and a half, half-aware that somewhere in this imagined community called India (but not in our neighbourhood), the game’s afoot. This came home to me the other day during the first phase of the election; I was startled to see a friend in Noida, someone I share a city with, holding up his inked cuticle on Facebook. For a panicked moment, I thought the election had passed me by.

It’s now conventional wisdom that in this drawn-out election process, voters in the later phases are swayed by their sense of who won the earlier rounds, so aggressive messaging through the duration of the prolonged electoral process becomes key to picking up undecided voters. Since social media is hard to regulate, this helps the Bharatiya Janata Party play to one of its strengths: being bullishly bullying online. Nowhere in the real world can you create the sense of overwhelming presence that you can on Twitter if your troll armies are marshalled by an organized operation.

One of the things the BJP does deliberately through big election campaigns is to mainstream majoritarianism, when a lot of people are politically switched on and paying attention. It can do this by weaponizing a long-held position or policy in a provocative tweet. The most obvious example of this in the current campaign was a tweet put out this week by the official BJP Twitter handle, @BJP4India, where it quoted Amit Shah: “We will ensure implementation of NRC in the entire country. We will remove every single infiltrator from the country except Buddha, Hindus and Sikhs: Shri @AmitShah #NaMoForNewIndia”

This tweet builds upon the BJP’s patient, planned campaign to create a religious test for citizenship right through Narendra Modi’s first term. The BJP’s enthusiasm for the National Register of Citizens in Assam is twofold. One, it hopes to use the process to colour illegal Muslim migration into Assam as a form of concerted infiltration. For the purpose of local Assamese politics, the party believes this will help to consolidate non-Muslim voters into a bloc that it can co-opt. Two, it wants to make the NRC an all-India tribunal because it thinks it can be turned into a pan-Indian inquisition that will tell true citizens from false ones.

To do this successfully, the BJP needs a statutory basis for discriminating between one kind of citizen and another, something that is explicitly ruled out by the Constitution. Since a frontal assault on the idea of equal citizenship is hard to pull off, the BJP has decided to amend the Citizenship Act to carve out an exception to the Constitution’s non-denominational definition of citizenship.

The amendment asks that all illegal migrants into India from Afghanistan, Pakistan and Bangladesh be granted immunity from prosecution and a fast track to citizenship except Muslims because these are Muslim majority nations and, therefore, it follows that all non-Muslim illegal migrants are persecuted refugees while all Muslim migrants are illegal infiltrators.

The sleight of hand here is that the BJP is working up a ‘humanitarian’ justification for statutory discrimination. Notice, however, that Myanmar is left out of this list of neighbouring countries. Notice also that this is arbitrary and inconsistent because Myanmar, a country that shares a land boundary with India, doesn’t figure in this list whereas Afghanistan, which doesn’t, is included. The reason for this inconsistency is simple: if the logic of giving sanctuary to persecuted religious minorities from adjacent countries — the ostensible justification of the bill — was consistently followed, the Rohingyas, Muslim refugees from majoritarian Buddhist violence in a neighbouring state, would be eligible for the waiver from prosecution and the shortened qualifying period for citizenship.

This would defeat the whole purpose of the amendment, which is to create a legal precedent for discriminating against Muslims in matters of citizenship. The citizenship amendment bill wasn’t passed by the Rajya Sabha in its last sitting but should the BJP form the government again, it will be brought to Parliament again because it is central to the BJP’s project of redefining India as a Hindu state.

The @BJP4India tweet goes further than the amendment bill by mentioning only the ‘Indic’ minorities, leaving out Christians and Parsees who are also amnestied by it. The point of this elision is obvious: it drives home the message (during the sound and fury of an election campaign) that the BJP is the champion of those Indians whose religious geography coincides with India’s national boundaries, as opposed to those who, by reason of their foreign faith, have extra-territorial loyalties.

This is a hardy perennial from the sangh parivar’s playbook: it dates back to Savarkar’s punyabhumi/pitribhumi distinction. The BJP might include Christians and Parsees to top-dress a bill that will attract Supreme Court scrutiny should it become law, but as the tweet makes it clear, the BJP wants to use the NRC and the amendment bill to start the process of redefining India as a Hindu nation where Hindus and those who can be fudged into the Hindu fold are given the benefit of the doubt where others, specifically Muslims, are not.

The Twitter debate provoked by the tweet ticks all the desired boxes. Where will Hindus go if not India? Why don’t Muslims go to the Muslim nations spawned by Partition? The point of the argument about citizenship is to turn Indian politics into a long-running revenge drama aimed at completing the unfinished business of Partition: the creation of a counter-vailing Hindu rashtra. Given the reality of Muslim majoritarianism in Pakistan and Bangladesh, there is an aggrieved rhetorical power to this argument. Elections for the BJP in the age of social media are an opportunity to broadcast through provocation and trolling a communal common sense.

The BJP’s political messaging is intended to accomplish two things: one, to encourage Hindus to believe that they and they alone are India’s organic citizens, its authentic native sons, and, two, to teach Muslims the need to behave like deferential subjects: publicly invisible, politically impotent. In the normal course of politics, these aims are sketchily disguised for the sake of public decorum, but they emerge naked and unvarnished in the course of an election.

Maneka Gandhi and her son Varun are the BJP’s anti-Gandhis and so they respond to Sonia and Rahul’s secular orthodoxies with the mechanical inversions of apostates. A decade ago, it was Varun who was charged with inciting violence against Muslims. Two days ago, it was his mother’s turn. A clip of a speech by Maneka Gandhi in which she addressed a Muslim audience went viral. She told them that her post-election attitude towards them would depend on their willingness to vote for her. She was going to win, she said, and if they wanted help from her, she would have to be confident that they had voted for her because politics was a matter of give-and-take. “We’re not all children of Mahatma Gandhi, are we?” she asked. It’s an extraordinary speech where she warns Muslims about voting against the BJP and threatens to withhold her patronage if she learns that they haven’t turned out for her. She addresses them, not as self-respecting citizens but, as ungrateful supplicants who deserve to be punished for their ingratitude.

The connection between treating Muslims as helots, to be hectored, herded and coerced into obedience on the one hand, and working through policy and propaganda to characterize illegal immigrants as Muslim by definition on the other, isn’t hard to see. This is an orchestrated bid to exclude and intimidate Indian citizens in good standing.

Majoritarianisms need enemies and so they constantly re-invent the Other. Sinhalese majoritarianism didn’t abate after its arch enemy, Tamil secessionism, was destroyed. It promptly replaced Tamils with the island’s Muslims. Its bigoted monks and politicians now rage against treacherous, fast-breeding Muslims with the same fluency they deployed against treacherous, secessionist Tamils. Pakistan’s Sunni establishment persecutes Muslim minorities like the Shia and the Ahmadiyas with the practised zeal that it once directed at heathens. There’s no slaking the thirst of that bloody altar: at election time, when majoritarians ask to be propitiated, we should just say no.

What does it mean to be Indian?

Words hurt as much as sticks and stones