Unlike Gujarat, the idea of Hindu rashtra will be tested in UP 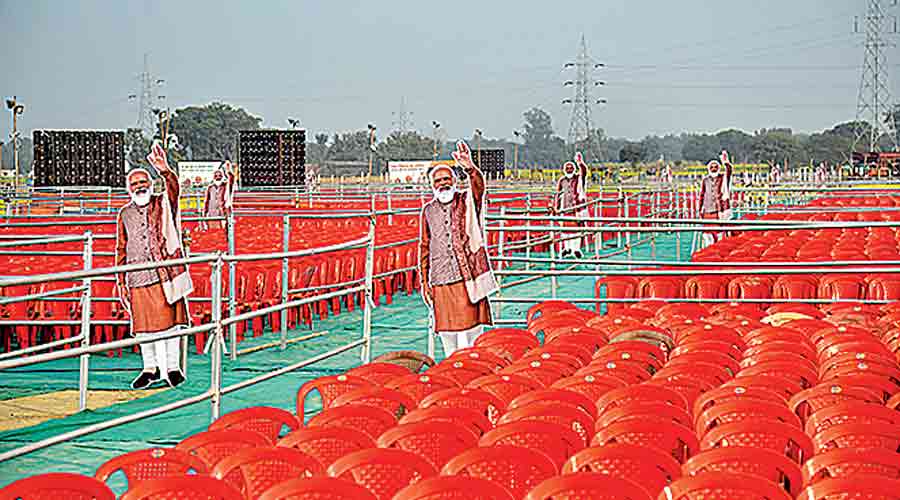 If the Bharatiya Janata Party is defeated in the upcoming elections in Uttar Pradesh, it would represent the first electoral defeat of Hindu rashtra. Of course, the BJP has been defeated many times before in the polls. But this election has been set up, both by the BJP and its principal challenger, the Samajwadi Party, as a referendum on the kind of State the Yogi Adityanath regime has methodically constructed over the last five years.

In other words, the model Hindu rashtra of Uttar Pradesh is now being put to the vote. Led by a saffron-clad monk as chief minister, Uttar Pradesh has been at the forefront of enforcing Hindu supremacy through the persecution of Muslims, much of it as a matter of explicit and formal policy. This has prompted other BJP chief ministers, keen to accelerate their own transition into full-fledged Hindu rashtra, to send delegations to learn about the finesses of UP’s beef and love jihad laws.

The sangh parivar deputes Yogi Adityanath in elections from Bengal to Kerala as a symbol of the kind of rule it desires all over the country. Uttar Pradesh is also the stage from which Prime Minister Narendra Modi frequently plays the Hindu king, from performing puja in the Ram temple in Ayodhya to proclaiming India’s emergence from the ‘long period of slavery’ while inaugurating a religious corridor in Varanasi.

In this respect, Uttar Pradesh has succeeded Gujarat as the premier Hindu nationalist lodestar. Both states represent the purest manifestation of the Hindu rashtra project of the sangh parivar. In Gujarat, the BJP has never been turned out by voters ever since assuming power. Will Uttar Pradesh be any different?

The recent exodus of backward caste leaders from the BJP camp reflected this sense of disgruntlement. The dilution of the constitutional structure that Hindu rashtra demands also erodes the substantive political representation of these backward castes. Not only are their demands of caste census and sub-categorization ignored, they are met with police lathis when they ask for the implementation of existing quotas. When their fields are destroyed by stray cattle, they are asked to quietly bear the cost of protecting gau mata.

The caste leaders who could represent their grievances and bargain on behalf of these backward castes have been systematically defanged, with legislators and ministers reduced to rubber stamps, even as unchallenged authority is vested in the ‘Hindu Hriday Samrat’ leading the state. In brief, those who find themselves at the wrong end of the Hindu social order are denied the means with which to compete for a fairer share of the pie. This was the Gujarat Model under Modi whose reprise we are seeing under Yogi Adityanath.

How has the BJP then been able to sustain a seemingly permanent Hindu political majority in Gujarat? After all, caste inequalities are as entrenched in Gujarat as they are in Uttar Pradesh, held in place by a government run by a coalition of upper castes and dominant Patidars. After the Gujarat earthquake, when villages had to be shifted to new sites, the upper castes and Patidars ensured that Dalits, OBCs and Muslims were allotted separate venues away from their villages. Given this reality of their Hindu rashtra, what then has bound these different sections of Hindus together under its umbrella for all these years?

This permanent Hindu political majority of Gujarat is not purely a function of hatred of the ‘Muslim Other’. It is also an outcome of two other reasons, having to do with
the social and political evolution of Gujarat.

One, the backward castes of Gujarat do not have a historical memory of the struggle for a fairer share akin to the Mandal movement in Uttar Pradesh. In Gujarat, the backward KHAM combination (under Madhavsinh Solanki), which temporarily displaced upper caste domination in government, was an electoral strategy conjured up by the Congress elite rather than an ideological struggle waged from the grassroots. Like most electoral combinations borne out of elite compromise, KHAM soon petered out, as the social base underlying the combination drifted away under competing pressures.

The resurgence of the upper castes was sealed by the anti-reservation riots of 1985, protesting against the Solanki government’s decision to expand reservation given to backward castes. These caste riots soon morphed into communal riots, carefully orchestrated by Hindu nationalists who emerged as a major force in the subsequent elections. A series of further riots during the Babri agitation pitted backward castes and Dalits against Muslims and successfully replaced caste antagonism with communal antagonism as the decisive fault line in Gujarati politics. As the scholar, Ornit Shani, notes of that period in Gujarat, “the growing appeal of Hindutva, and its inherent antagonism towards Muslims, was in fact an expression of deepening tensions among Hindus, nurtured by an instability in the relations between castes and by the ways in which changes in the caste regime were experienced by diverse groups of Hindus.”

On the other hand, the backward politics of Uttar Pradesh, forged by autonomous Mandal parties borne out of an ideological struggle instead of being blown over by the Hindutva surge like in Gujarat, stopped it in its tracks at its peak in 1993. These are the reserves of historical memory that Hindutva cannot erase, and which serves as a model of resistance for backward communities in Uttar Pradesh. Gujarat, however, does not have such a readily available model.

Second, Gujarat managed to sustain its Hindu political majority through the creation of a large segment of what the political scientist, Christophe Jaffrelot, termed as the “neo-middle-class”. This neo-middle-class, especially under Modi, shaped the dominant political culture of the state. This class spanned beyond caste and communities, united only by a Hindu sensibility and an aspirational lifestyle. A rural OBC Koli might vote for the Congress, Jaffrelot explained, but when he migrates to the city he might switch over to the BJP. The neo-middle-class phenomenon weakened the bonds of caste solidarity among the Hindus of Gujarat, giving an open field to Hindutva.

In contrast, Uttar Pradesh is still a primarily rural state and the politics here is much more determined along communitarian lines, even in urban areas. Therefore, the Hindutva of Uttar Pradesh has been immensely sensitive to caste variations, carefully building up a patchwork of castes under the Hindutva bouquet. There is no comparably sizeable and coherent neo-middle-class here that shapes the dominant culture of the state. This is why Modi emphasized his tea-selling OBC identity when he came to Uttar Pradesh, going beyond the middle-class-inflected ‘Gujarati asmita’ discourse he put to use in his home state.

However, whereas the ideology of Hindu nationalism has been sensitive to caste variations while wooing different castes, the reality of Hindu rashtra has trampled on these caste differences in pursuit of the creation of a common Hindu subjectivity. The backward communities of Uttar Pradesh have the consciousness, social networks and community leadership to resist such a project.

To sum up, one only needs to look at the state of the SP. One year back, the party did not exist on the ground as a viable political organization. Within three months, its support base has expanded to within touching distance of pushing the BJP off its perch. This cannot be explained by any attractive alternative vision, organization restructuring, or charismatic leadership. The most compelling factor swelling its ranks is that it is identified as the only party capable of upending the Hindu rashtra foisted upon the people of Uttar Pradesh.

This is why the upcoming Uttar Pradesh election resembles a referendum with far-reaching implications for the future of Indian democracy. Hindu nationalism as an ideological proposition has been rejected innumerable times before, especially by voters in the East and the South. But if the voters of Uttar Pradesh do indeed throw the BJP out, it would be the first popular rejection of the living, breathing entity called Hindu rashtra.

(Asim Ali is a political columnist and research associate with the Centre for Policy Research, Delhi)