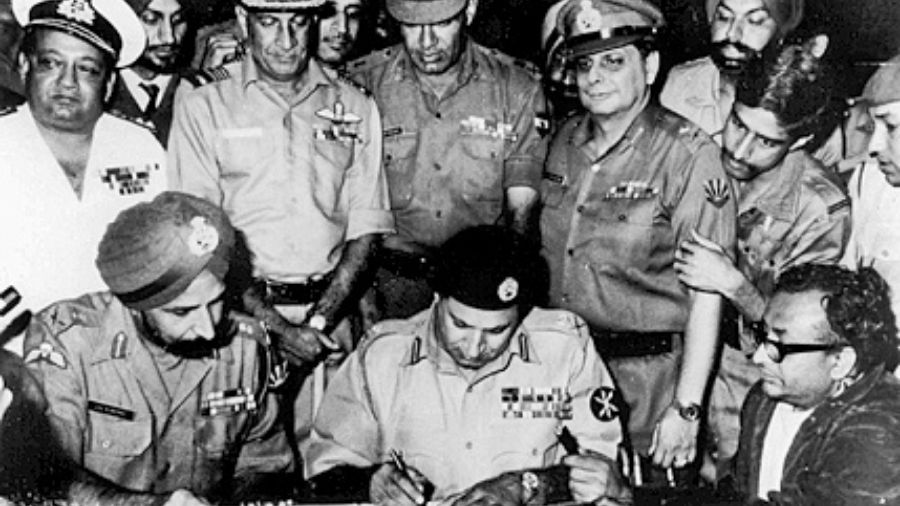 If Sam Manekshaw had deployed his forces for two offensive campaigns in 1971 — to liberate Bangladesh and retake PoK — he would have achieved neither.
File picture
Subir Bhaumik   |   Published 04.05.22, 03:16 AM

There is a tendency to undermine India’s stellar military and political achievement in 1971 with the saffron constituency saying, ‘We missed out on a great opportunity to take back Pakistan-occupied-Kashmir’ or ‘we could not leverage our victory in Bangladesh to settle the Kashmir issue.’ Only those with little or no military understanding can come up with such facile arguments. Those who offer such arguments should look at the Russian military experience in the Ukraine war to understand the point I am making.

No military, however strong, can win a war unless its war aims are clear and are in keeping with its capabilities. The moment war aims become expansive and an army tries to do things beyond its capabilities, it gets into trouble. Political masters, too, lose faith and take hasty decisions that ruin the force’s image.

This has happened to the German Wehrmacht in the Second World War, to the American military in Vietnam, Iraq and Afghanistan, and to the Russians in Afghanistan. Not to speak of India’s misadventure in Sri Lanka.

Into the third month of the ‘special military operation’ in Ukraine, Russia hinted that its real focus would be the Donbas region. This was not Russia’s initial objective. If Vladimir Putin was not aiming to bring down Volodymyr Zelensky’s government and destroy the capabilities of the Ukrainian military, why would the Russian army try to encircle major cities, bomb them ceaselessly, fire missiles on the Ukrainian military, civilians, and on logistical targets? Putin undoubtedly wanted regime change in Kyiv as well as considerable neutralization of the capabilities of the Ukrainian military and an assurance that Ukraine will never join the NATO.

So why talk of a more limited war? Putin obviously realized that it was no longer possible to drive the Ukrainian military to surrender because they are motivated and reasonably well-armed to defend their country. Initially, Russian soldiers were possibly under the impression that they would be welcomed. But they gradually began to realize what they were up against — a fierce Ukrainian resistance backed by regular and quality military supplies from the West. A high casualty rate led to a sharp drop in troops’ morale and a bloody stalemate ensued on the front during spring.

Indira Gandhi had a specific war aim in 1971— the creation of Bangladesh as an independent sovereign nation. So India’s military resources were focused on a swift and hard military campaign in the east. Concentration, not dissipation, of forces is critical to a military offensive. If Sam Manekshaw had deployed his forces for two offensive campaigns in 1971 — to liberate Bangladesh and retake PoK — he would have achieved neither. Unlike in East Pakistan, there was no guerrilla force in PoK waiting to welcome the Indian army as liberators. Pakistani defences in PoK were infinitely stronger and a campaign there may have even provoked Chinese intervention. The Chinese were already reconciled to the loss of East Pakistan because they had read the writing on the wall. PoK is too close to China and would have possibly provoked a response from Beijing which was not the case with Bangladesh. So despite Henry Kissinger’s best efforts, Beijing did not jump into the fray, realizing the snow had already choked up the Himalayan passes.

By now it is well-known that Indira Gandhi sacrificed the leverage provided by an estimated 93,000 prisoners of war to get Sheikh Mujibur Rahman out of a Pakistani jail. His presence in a newly independent nation was seen as crucial to stabilize the situation in a friendly country, which holds the key to calm in India’s Northeast.

But let us get this clear — the Indian army did achieve a great victory in 1971 but it was not in a position to achieve this triumph while waging war on two fronts.