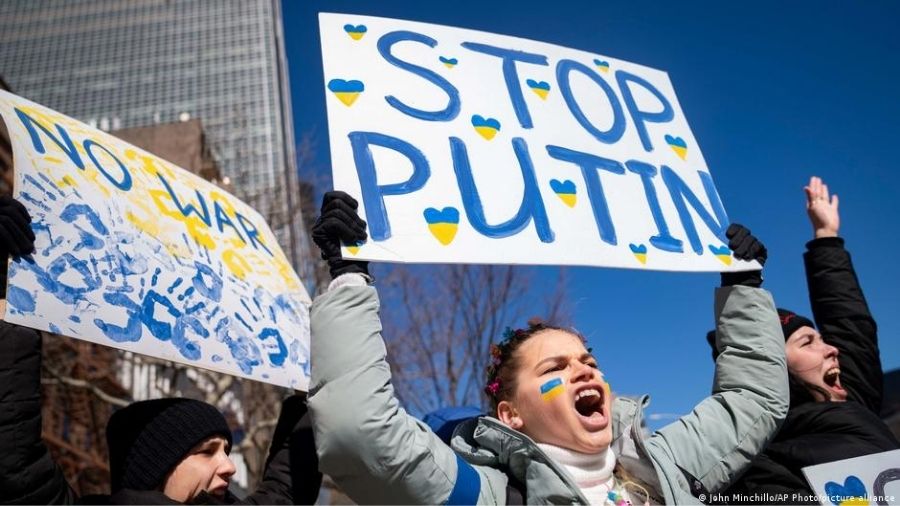 Is Russia’s invasion of Ukraine in consonance with the principles of international law?

Article 2(4) of the United Nations Charter entails that member nations are to respect the sovereignty and the territorial integrity of another nation and refrain from the “threat of use of force”. The normative order of the non- use of force enshrined in the UN Charter comprises the general — yet absolute —  prohibition of the threat or use of force. It can, therefore, be reasonably concluded that prohibition on the use of force, which should have been respected by Russia, has been bypassed.

In the Nicaragua case, the  International Court of Justice  stated, “The principle of non intervention involves the right of every sovereign state to conduct its affairs without outside interference.” It further elucidated,“Between independent states respect for territorial sovereignty is an essential foundation of international relations”. Furthermore, no state or group of states has the right to intervene, directly or indirectly, for any reason whatsoever, in the internal or external affairs of any other state. Consequently, armed intervention and all other forms of interference or attempted threats against the personality of a state or against its political, economic, and cultural elements are in violation of international law. In the Corfu Channel case, the ICJ stated, “the court can only regard the alleged right of intervention as a manifestation policy of force such as in the past given rise to most serious abuses and such as cannot whatever be the present defects in the international organization find a place in international law.” It is evident that the attack on Ukraine by Russia amounts to the breach of the principle of non-intervention.

Vladimir Putin has justified the military intervention in Ukraine on the grounds of self-defence and to prevent an alleged genocide. However, Russia’s attack does not conform to the “Right to self defence” as envisaged under Article 51 of the UN Charter. Under Chapter VII of the UN Charter, there are certain  principles whereby a state can take recourse to self-defence under Article 51 whereby the sole exception to the general and absolute prohibition of force is contained in Article 2(4), which argues that  members have an inherent right of individual and collective self-defence against UN members in the case of an armed attack. The principle underlines an important component: that the right of self-defence is  allowed only in response to an ‘armed attack’ by one state against another and does not include anticipatory self-defence. While considering what an armed attack is, the ICJ, in the Nicaragua judgment, observed, “The Court does not believe that the concept of ‘armed attack’ includes assistance to rebels in the form of the provision of weapons or logistical or other support.” Therefore, assuming that the allegations of ‘atrocities’ perpetrated by Ukraine are true, they would still not give Russia the right of self-defence as there has been no ‘armed attack’.

Furthermore, Russia’s failure to report to the UN Security Council and not taking its sanction violate the ‘Right to self defence’. A state invoking the right to self-defence is required to report to the Security Council immediately; the right stays in place until the UNSC has taken measures to maintain international security and peace. Since the Nicaragua judgment, it is noticeable that states on the whole do comply with Article 51’s obligation to report actions in self-defence to the UNSC. It is clear that states have taken seriously the ICJ’s message that the failure to do this will weaken any claim to be acting in self-defence. The court implied that when the use of force is governed by the law of the Charter, a state is precluded from invoking the right of self-defence if it fails to comply with the requirement of reporting that becomes a substantive condition and limitation on the exercise of self-defence. Since Russia has not reported to the UNSC or sought its sanctions, the attack on Ukraine is unjustified.