While the rise in tiger population is heartening, unabated deforestation is leaving these big cats without a home 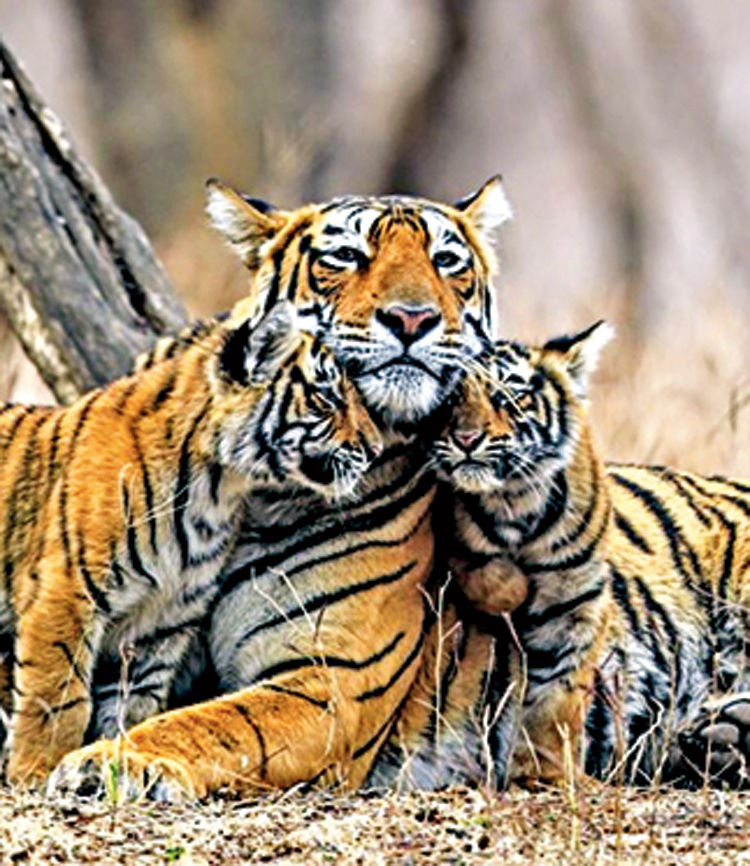 Tiger conservation efforts will count as a success only if the tiger’s geographical range is maintained along with increased numbers.
(Wikimedia Commons)
The Telegraph   |     |   Published 05.08.19, 05:44 AM

Sir — From being widely hunted during the colonial era to being brought back from certain extinction in the early 1970s, tiger conservation has a long and chequered history in India. But it seems as though tiger numbers in India have shown a steady increase since the establishment of the National Tiger Conservation Authority (“Number rises, none in Buxa”, July 30).

While there are stringent rules against threats like poaching, one of the biggest problems when it comes to conserving Indian tiger populations is man-animal conflict. Peaceful coexistence being the only way forward, monetary benefits or other incentives for people who live in places with a tiger population is a short-term solution. Another measure is to include such locals in not just conservation efforts but also lucrative avenues like wildlife tourism. In the long run, education and awareness about the importance of tigers in the ecosystem and their necessity for the regeneration of forests — a valuable resource for local people — is the only way to minimize man-animal conflict.

Sir — The results of the All India Tiger Estimation, 2018, show that India’s tiger population has increased by 33 per cent to 2,967 tigers in 2018 from 2,226 tigers in 2014. While the rise in tiger population is heartening, unabated deforestation is leaving these big cats without a home. As a result, they are straying into human habitation, putting both themselves and people at risk. Encroachment of forestland by industries with the help of unscrupulous politicians has gone unchallenged for far too long. Besides carrying out afforestation drives, the government should take immediate steps to conserve existing forests.

Sir — It is indeed encouraging that the number of tigers, animals that were once on the verge of extinction, has risen in India. But it is also a matter of concern that they are disappearing from places like Odisha and the northeastern hills. Even more shocking is the fact that no tigers were found in Buxa and Palamau, major tiger reserves in India. Tiger conservation efforts will count as a success only if the tiger’s geographical range is maintained along with increased numbers.

Sir — The fourth cycle of the tiger census is reason to cheer. But India cannot rest on its laurels. For alongside these rosy statistics are gory visuals of fishermen hounding a big cat in the Sunderbans, and of tigers being lynched in Pilibhit and Lalgarh.

Man-animal conflict is caused by habitat loss and the destruction of forests. A tigress needs a minimum of a 20-square-kilometre territory, whereas a male tiger 60 to 100 sq kms. Therefore, building tourist cottages in the core area of national reserves should be done away with. Tigers are indicators of the ecological wellness of our planet. Being apex predators, they ensure that the numbers of herbivores like deer are kept in check. A steep fall in tiger population could lead to a rise in herbivore population, which could potentially destroy forests and green cover, which, in turn, would lead to global warming by increasing the amount of carbon dioxide in the air.

Sir — The apparently rising number of big cats in India must not be confused with the well-being of the species. When tiger conservation efforts began in earnest in India, tourism had been envisioned as a tool to encourage protection of tigers. But somewhere along the way, the financial benefits accrued from tourism has overtaken conservation efforts. The report which the prime minister ecstatically presented about the rise in the number of tigers also states that “presently, the priority of the [Ranthambore] tiger reserve is tourism, and there is little focus on protection, scientifically planned habitat interventions and regular monitoring of various aspects of tiger reserve management. The focus needs to change”. Is this neglect the reason why important tiger reserves like Buxa and Palamau have lost all their tigers?

Conversely, shutting down tourism will make the job of poachers easy. Without the constant surveillance owing to the traffic that tourists bring in, the forest department is not equipped to protect India’s rich biodiversity. What is required is thus a middle ground. Tourism is important, but it should not become the dominant concern in the maintenance of national parks and sanctuaries.

Sir — The management of the Jagannath temple in Puri has done the right thing by banning the chewing of paan and gutkha inside the temple premises. It has been decided that a hefty fine will be imposed on the offenders (“Fine plan for paan chewing at Puri temple”, July 31). If the temple management can implement the ban strictly it will indeed be a divine turn of events. It is also quite encouraging that the goal of the management is to also make the temple premises plastic-free very soon.

Chewing paan and gutkha is an unhealthy habit shared by many an Indian, not just in Odisha but across the country. This is not only harmful for the person addicted to these substances but is also a hygiene and cleanliness issue as people without any civic sense spit anywhere, spreading germs. Moreover, prolonged consumption of these items can cause cancer.

Notices against spitting — both paan and gutkha chewers are guilty of this — go unheeded and fines are rarely extracted from offenders. Similarly, notices of plastic-free zones are put up at various places without much effect. If other countries have been able to implement these rules efficiently, why has India failed to do so? The reason is that the Indian government and its machinery does not walk the talk.

Sir — The Jagannath temple management must be lauded for banning the chewing of gutkha and paan on the premises. The temple is an archaeological heritage and the corrosive substances in paan and gutkha spit could wreak havoc on an edifice that is already fragile. If a modern and hardy structure like the Howrah bridge is susceptible to such substances, one can only shudder at what these would do to stone.

Few Indians have civic sense, even fewer of them care for the country’s archaeological heritage — the careless defacing of monuments is proof of this. As such, the Archaeological Survey of India should ban chewing tobacco at all sites of historical importance. But any rule is as effective as its implementation and if Indians care for something even less than historical monuments, it is rules.

Sir — All that glitters is not gold. Someone should pass this wisdom on to the Calcutta Municipal Corporation. The craze of beautifying the city refuses to die down. What is dying a slow but steady death, however, is the city’s ecological balance. Old, robust trees are being cut down for ornamental varieties, with little care for the birds, insects and microbial organisms that must thrive in the former. Fountains dot a city where groundwater levels are critical. Precious electricity generated from non-renewable resources is wasted on garish lights. Old buildings and architectural gems are routinely felled and replaced by concrete monstrosities. One fails to see the beauty in all this.