POLITICS AND PLAY | Three democracies and their demagogues 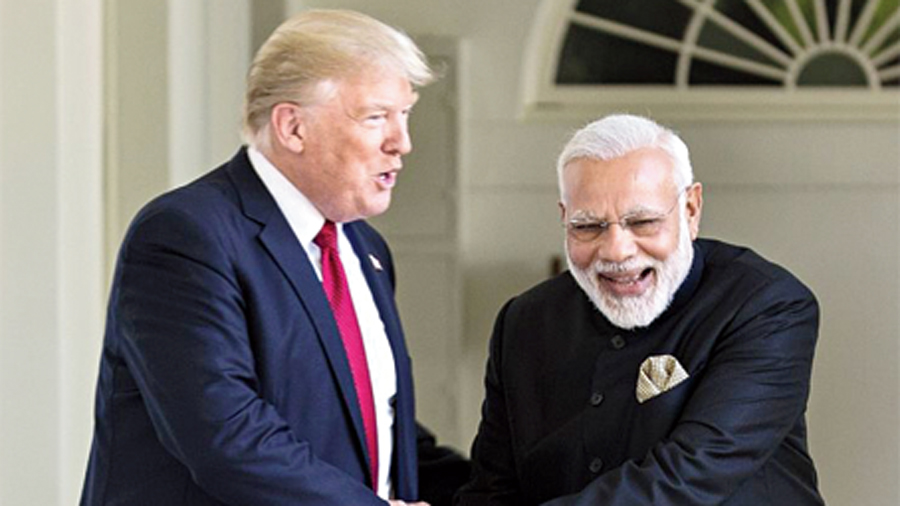 Four years ago, as the last American presidential elections were being held, I was asked to chair a talk in Bengaluru by Strobe Talbott. At that time the head of the well-known Washington think-tank, the Brookings Institution, Mr Talbott had previously served as deputy secretary of state in the administration of President Bill Clinton. In that capacity, he had played a crucial role in tilting America’s policy away from its traditional bias in favour of Pakistan towards a position more congenial to the interests of India.

The talk of Strobe Talbott’s that I was scheduled to chair was to be held in the third week of November 2016. By then the presidential elections would be over. Hillary Clinton was the favourite to win. In the event she lost and, instead of coming to Bengaluru in a mood of jubilant anticipation, Mr Talbott arrived looking (and feeling) utterly crushed. In our conversation before the talk he spoke bitterly about the fact that a pathological liar had befooled the American electorate. I agreed with Mr Talbott that Donald Trump had told a lot of lies during his campaign. But, I said, he did utter, again and again, two words that were true. These were ‘Crooked Hillary’.

Donald Trump had portrayed Hillary Clinton as the quintessential Washington insider, her past record replete with instances of networks used and abused, favours given and received. Four years later the situation is very different. It is now Trump who looks corrupt and compromised, as well as inefficient and incompetent. His gross mishandling of the pandemic has exposed his administrative weaknesses, while the evasiveness about his tax returns has cast doubt on his integrity as well. His abusive and misogynist ways have alienated a large number of women who voted for him in 2016. By just appearing to be a plain, decent man, one who will listen to the experts rather than foist his own nutty views on public policy, Joe Biden is (at the time of writing) the clear front runner in the race to be the next president of the United States of America.

Democracies are meant to be governed in a collegial and collaborative manner. Donald Trump, however, is a vain demagogue, interested only in publicity and self-promotion. To be sure, there have been charismatic American presidents before, who presented themselves as larger than their office. They have included such figures as John F. Kennedy and Theodore Roosevelt in the 20th century, and Andrew Jackson in the 19th century. Yet none of them remotely approached Trump in their self-love.

If Trump has not done more damage than he has, that is largely due to the resilience and inner strength of American institutions. The media, the universities, the defence establishment, the scientific community have by and large maintained their integrity. They have all pushed back, albeit with varying degrees of success, against his attempts to control and manipulate them to fulfil his own personal agenda. If Trump were to be defeated by Biden next month, then these institutions will all play a vital role in rebuilding America, in helping it heal the wounds within as well as in constructively reasserting its role in the world.

Like the world’s richest democracy, the world’s oldest democracy, the United Kingdom, is also governed by a self-obsessed demagogue. Boris Johnson’s path to power was not dissimilar to Trump’s. Within his own party, he was seen as a dashing alternative to the dull, staid figure of Theresa May. The Conservatives won the general elections of 2019 in part because of the wit and intelligence of their leader and because his rival, Jeremy Corbyn of the Labour Party, was seen by many voters as a dogmatic (as well as humourless) socialist absolutely unfit to run the government.

Compared to Donald Trump, Boris Johnson is perhaps more maverick than malign, an ambitious opportunist rather than a proto-racist with autocratic tendencies. It took the last year of Trump’s term for his weaknesses to be exposed; whereas the turning of the public mood away from Johnson has come rather sooner. His attitude towards the pandemic and the Brexit endgame has shown him to be more an incompetent bungler than a fascist-in-the-making. Meanwhile, Labour, having dumped Corbyn for a leader with greater intelligence and administrative ability, has also weakened the prime minister’s case. An increasing number of British voters now see Keir Starmer in more favourable terms than they ever saw Jeremy Corbyn. Within his own Conservative Party, there are those who say that the chancellor of the exchequer, Rishi Sunak, is more fit for the office of prime minister than Johnson himself.

The next general election in Britain is three-and-a-half years away. Johnson being defenestrated by his party even before then remains a distinct possibility. But, as with Trump, whenever he goes, the damage he has done will be undone by the institutions he has degraded but not destroyed — such as the Parliament, the courts and, not least, the media. Indeed, for all his faults and fraudulent behaviour, history may judge that it was David Cameron who, by calling for a referendum on Brexit when one was not needed, hurt the UK far more than Johnson.

Since 2016, the world’s richest democracy has been sought to be run into the ground by a demagogue. Meanwhile, the world’s oldest democracy is also currently misgoverned by a demagogue. So we come, finally and inevitably, to the world’s largest and most populous democracy, our own. Narendra Modi came to power two-and-a-half years before Trump; and a full five years before Johnson. He, too, is a demagogue, a politician who thinks he is bigger than his party and his government, and who will not shrink from using deceit and falsehood in order to consolidate his power.

There are some ways in which Modi is similar to Trump and Johnson, but there may be more ways in which he is different. For one thing, he has been a full-time politician for far longer than they, with much greater experience of how to manipulate public institutions to serve his own purposes. Second, he is far more committed to his ideology than Trump and Johnson are to theirs. He lives and embodies Hindu majoritarianism in a much fuller (and hence more dangerous) manner than Trump lives white supremacy or Johnson embodies xenophobic Little Englandism. Third, in the enactment and fulfilment of his ideological dream, Modi has as his instrument the Rashtriya Swayamsevak Sangh, whose organizational strength and capacity for resource mobilization far exceeds any right-wing organization in the US or the United Kingdom.

There is a final reason why Modi is more dangerous to the interests of his country than Trump and Johnson are to theirs. This is that the institutions of Indian democracy are so much weaker. Trump cannot command the Federal Bureau of Investigation to do his bidding, whereas Modi can direct our tax authorities and investigative agencies to do his. Sections of our judiciary seem to have lost their nerve; large sections of our media have certainly lost their spine. They are unwilling, or unable, to keep the prime minister in check, to hold him accountable for his errors and his excesses.

In his desire to extend his lease on power, Narendra Modi is also much luckier than either Donald Trump or Boris Johnson. His luck lies in the unchanging nature of his Opposition. Trump will certainly find it far more difficult to defeat Joe Biden than he did Hillary Clinton. Keir Starmer is a more credible challenger to Johnson than Jeremy Corbyn ever was. On the other hand, despite suffering two humiliating defeats in the general elections of 2014 and 2019, despite the burden of nepotism and inexperience that he carries, and despite even his failure to retain the family pocket borough of Amethi, Rahul Gandhi is still being presented by the Congress as the prime ministerial alternative to Narendra Modi in 2024.

All demagogues are bad for democracy, but some demagogues are worse than others. If Donald Trump loses next month, America may recover relatively soon from his depredations. Great Britain was shrinking into itself even before Boris Johnson became prime minister; his impact on the history of his country will turn out to be relatively negligible. However, the destruction that Narendra Modi can wreak, indeed has already wreaked, on Indian democracy is immense. It will take decades to repair.