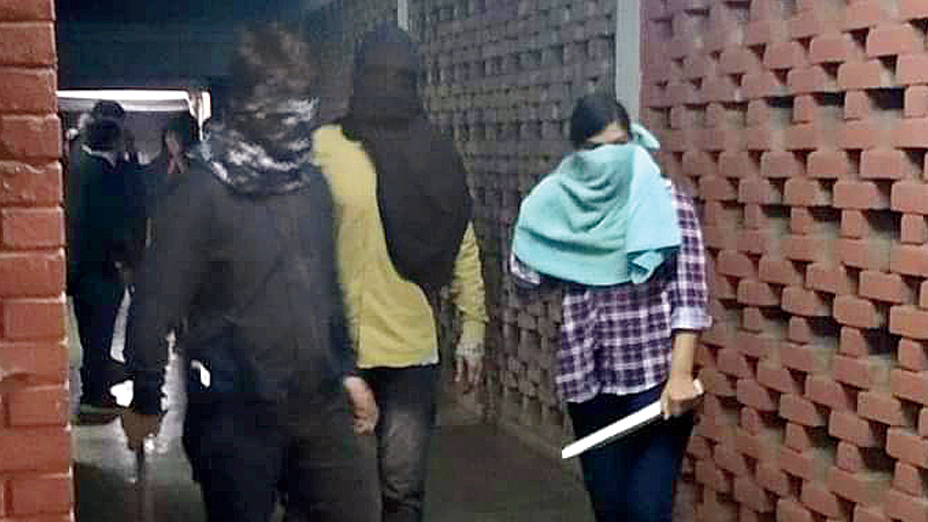 Masked attackers with a stick and a rod at Sabarmati Hostel at Jawaharlal Nehru University.
Picture shared by JNUSU
The Editorial Board   |   Published 14.09.20, 02:00 AM

Rowdyism and violence have no place in centres of learning. Indian universities, unfortunately, have been witness to such excesses in campuses, time and again. Political animosities have, more often than not, transformed universities into turfs of violent rivalries. Such contestations, often between the ascendant rightwing groups and their leftist opponents, have been reported from Delhi University, Himachal Pradesh University, Jawaharlal Nehru University, among other institutions, in recent years. So there is some merit to the recent deliberations among premier Central universities on the issue of deviant campus behaviour. Most of the participants — Jamia Millia Islamia, Banaras Hindu University, Aligarh Muslim University, Jamia Hamdard, JNU — reiterated the need to desist from imposing rigid rules. Nonetheless, there were some disquieting views. There was some talk of maintaining ‘files’ on students with differing views. The JNU proctor, astoundingly, called for segregation among learners after complaining that the campus had become the launching pad for political agenda. Even the vice-chancellor of Jamia Millia Islamia, who had been critical of police depredations on the campus, apparently conceded that the responsibility of maintaining peace inside universities was now being jointly shared by the administrators and the police.

The presence of police on the campus is not acceptable in any democratic polity. The proposal of maintaining dossiers on students with dissenting views is equally preposterous: it amounts to institutional surveillance on students. Taken together, these remarks amplify concerns that university officials are increasingly using campus violence as an excuse to curb independent thought. Such a suspicion is not unwarranted. The Bharatiya Janata Party’s rise to political dominance has coincided with a brutal campaign that seeks to demonize students and even teachers who resist hegemonic views or speak up for the cause of plurality of opinion. The right to debate as well as the freedom of thought is integral to the idea of the university as an institution. Yet, be it the targeted intrusion into JNU over alleged sedition or the crackdown against students in Jamia Millia Islamia and AMU in the wake of the protests against the Citizenship (Amendment) Act, the record of this government in safeguarding the sanctity of diverse opinion has remained exceedingly shoddy. This makes it difficult to believe that the endeavour to separate ‘students’ interests’ from ‘vested interests’ is as honourable as it is being made out to be.