A season of bans in Pakistan 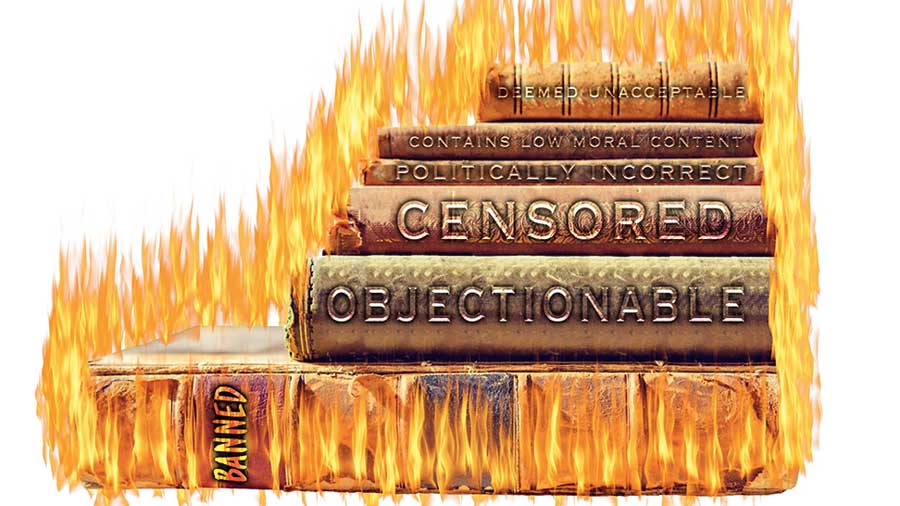 In a globalized world, banning online apps or books makes no sense but there is a culture of moral policing in our society
Pixabay
Mehmal Sarfraz   |   Published 30.07.20, 12:18 AM

“Think for yourselves and let others enjoy the privilege to do so, too.” — Voltaire

Pakistan has had a history of banning books and social media platforms like YouTube and Facebook. A new wave of banning has started in the country, once again. Recently, the Punjab Curriculum and Textbook Board banned one hundred school books in a single day for containing content deemed ‘anti-national’ and ‘blasphemous’. PCTB’s managing director, Rai Manzoor Hussain Nasir, told Geo TV that they are “currently examining over 10,000 books being taught in private schools”. All of this is taking place under the Punjab Curriculum and Textbook Board Act, 2015, which was passed by the previous Pakistan Muslim League-Nawaz government. The list of the 100 books that have been banned was tweeted by the journalist, Benazir Shah, on Tuesday. A lot of them were social studies books, some of them were English-learning books, some were Urdu books; there was, apparently, a book where counting concepts were explained to young students by showing them pictures of pigs.

Last week, the Punjab assembly passed the Tahaffuz-e-Bunyad-e-Islam bill, 2020. It gives the Directorate General Public Relations powers to visit and inspect any printing press, publication house, book store and confiscate any book, before or after printing.

On top of banning books, the Pakistan Telecommunication Authority has blocked an online game, ‘PlayerUnknown’s Battlegrounds’. Dawn’s Ramsha Jahangir reported that as per an order by the PTA, the “impact of PUBG is leading to the issue of ‘moral turpitude’. The term moral turpitude connotes anything done against just, honesty, modesty or good morals. It is deprivation of character and devoid of morality...” PTA also says that PUBG makes people less productive. “Sitting around in one place and playing for long hours is not good for physical health. Staring at the computer screen for long hours can affect eyesight and cause a headache.” Only a week ago, the PTA also banned the live-streaming app, Bigo, and issued a final warning to TikTok for ‘obscene’ and ‘immoral’ content.

In a globalized world, banning online apps or books makes no sense but there is a culture of moral policing in our society. We somehow want to control what others can read or watch or even play. Such bans are another form of censorship. Having banned columns and censored the media, those who are in positions of power now want to ban what our children are being taught at schools. This is a dangerous trend. We have seen some academics being fired from their jobs due to their activism. Critical thinking, it seems, is a threat. One of the books that have been banned had quotes of M.K. Gandhi. So now we don’t want our children to learn or to expose them to history that is different from the State narrative or get acquainted with historical figures who are non-Pakistanis. This is petulant behaviour.

In the 21st century, banning books or apps or games hardly makes any sense. In the age of the internet, one can always read these books online and/or use VPN to access banned apps. What these measures expose is that those with authority want to control our thinking and our actions.

The federal minister for science and technology, Fawad Chaudhry, has been quite vocal on the issue of these recent bans and the new bill that was passed by the Punjab assembly. In a series of tweets, Chaudhry said, “Islam in Pakistan is not threatened by TikTok or by books. What we are threatened by are sectarian divisions and extremism.” Chaudhry is not alone. A lot of people are perturbed by these actions.

Banning books is the trademark of a regressive society. Pakistan is still dealing with the aftermath of the Zia years. Intolerance and extremism seeped into our national fabric due to General Zia’s draconian policies. It will take decades to undo the damage that was done back in the 1980s, but if we continue down this path of censorship, we will end up in a place from where there is no coming back. Societies evolve over the years just like a human being; they try to move forward — but we have gone further back. Our intellectual freedoms are being thwarted in the name of national interest.

On the political front, Opposition parties are ready for an All-Parties Conference after Eid. What this APC ‘promises’ and what will actually be ‘achieved’ is something we will see in the coming weeks or months. The promise of ‘ousting the government’ seems far-fetched. So far, this looks like a political statement. On the other hand, the government’s performance leaves a lot to be desired. The Pakistan Tehreek-e-Insaf government will complete two years in power. There are three more years to go till its term ends. We have seen more inflation and less economic growth over these two years. There are many ways of judging a government’s performance, such as economic indicators, foreign policy and so on. While the economic performance can be explained better by experts, what we in the media have seen is a decline of our fundamental freedoms under this government. From the arrest of Jang group’s Mir Shakil-ur-Rahman by the country’s accountability bureau to the recent abduction (and subsequent release the same day) of the journalist, Matiullah Jan, by unknown men, one wonders where we are heading. Every media house is under pressure. Columns have been dropped, columnists have been blacklisted, news channels have been taken off air or thrown at the back numbers of cables, the space for free speech is shrinking every day.

Pakistan’s media are no stranger to censorship, but I have never seen this sort of depression and disillusionment in my 15-year-career in the media. Journalists have complained of their access being blocked because of their critical reporting of the government. Online trolling by accounts that are openly associated with the ruling party has become the norm. Some women journalists, including myself, have faced attempts to hack into our social media accounts. All of this makes working in the media even harder. This does not even factor in the psychological aspect we face as a result of the organized campaigns to discredit us. One wonders how long this will continue or whether this will become the ‘new normal’ that we may have to live with now.