Advertisement
Home / Opinion / This Ram has been grounded, but why?

This Ram has been grounded, but why?

DELHI DIARIES: Sushil Modi's fall from grace, the Congress's question on Rahul and the battle ahead in Assam 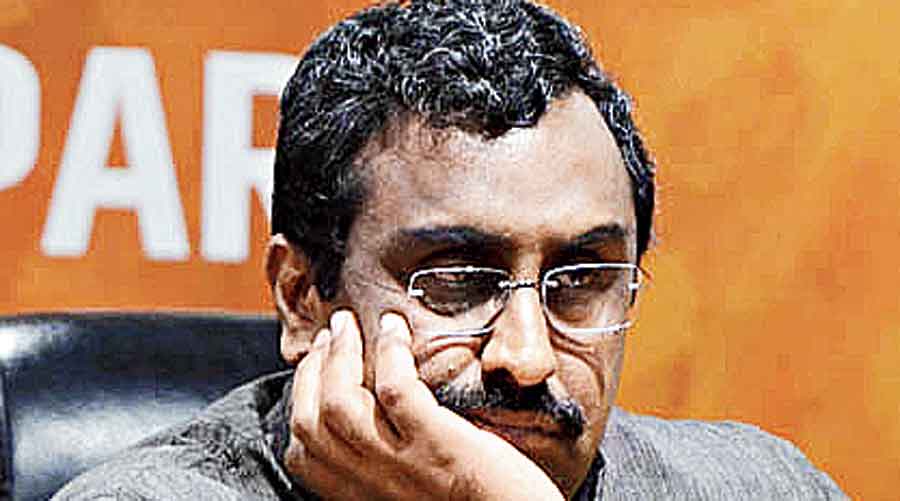 During the organizational reshuffle in the Bharatiya Janata Party in September, two significant leaders were dropped as general secretaries by the BJP chief, JP Nadda. One of them was the high-profile leader, Ram Madhav, and the other was P Muralidhar Rao. Both had moved from the Rashtriya Swayamsevak Sangh to the BJP and were aiming high. However, in a sudden move last week, Nadda appointed Rao as chief minder of party affairs of the politically significant Madhya Pradesh. Madhav, on the other hand, continues to be left high and dry.

The unexpected elevation of Rao while ignoring Madhav completely has become an issue of keen discussion in the corridors of the BJP. In fact, many are trying to find out the reason behind the dropping of the two at first and then rehabilitating just one. The choice, too, is curious. “A grand temple for Lord Ram is being built in Ayodhya and here Ram appears to have been sent into exile,” one leader was heard saying. One informed leader, however, claimed that Madhav had been flying too high and it was therefore that he had to be grounded first before he could be considered for a decent position. With every passing day it is becoming increasingly clear that in the current regime, nobody is allowed to soar too high.

Nobody is sure why the BJP kept its senior leader, Sushil Kumar Modi, out of the new National Democratic Alliance government in Bihar instead of repeating him as deputy chief minister. Several conspiracy theories are doing the rounds. A veteran politician said that this was because the prime minister, Narendra Modi, never forgives. The story goes back to around 2013, when he was the Gujarat chief minister and working hard to get anointed as the BJP’s prime ministerial candidate. Nitish Kumar, chief minister of Bihar and considered a close friend of Sushil Modi, was a rival. In fact, he had just severed ties with the NDA. At that point, in response to some journalists, Sushil Modi had reportedly said that Kumar was ‘prime minister material’. “See the fate of all those who did not support Narendra Modi wholeheartedly at that time, whether he was Lal Krishna Advani, Murli Manohar Joshi or anybody else. Sushil has joined their league,” the veteran leader said.

Even veteran politicians slip, fumble and stumble at the doorstep of power. Nitish Kumar made this evident while taking oath as the chief minister of Bihar for the seventh time. He took the oath of office at the Raj Bhavan and then went to put his signature on it in front of the governor, Phagu Chauhan. By then everybody had sensed that something was amiss. Kumar had forgotten to take the oath of secrecy. It is unclear if anyone pointed this out to him, but he went back to the lectern and completed the ceremony. Clearly, everyone present lacked a sense of humour; nobody even sniggered at this. However, people close to Kumar said that it was an outcome of the stress of becoming ‘chhota bhai’ to ally BJP after the Janata Dal (United) won just 43 seats as opposed to the BJP’s 74. One cannot be sure whether the stress is gone or has just started.

It is six versus 55 in Assam, a one-sided battle by any account. In Assam, the Congress is taking the heat from the ruling BJP after the chief minister of Assam, Sarbananda Sonowal, reportedly claimed at a rally that people will vote overwhelmingly for the continuity of his government in next year’s assembly polls. Why? For all the good that the BJP has done for the state in its six years in power at the Centre, and four in the state, compared to the Congress’s 55 years. The Assam Pradesh Congress Committee chief, Ripun Bora, however, is not taking any of this lying down. A combative Bora reportedly deployed sarcasm: people of Assam will vote overwhelmingly for the BJP because it rid the state of illegal foreigners; because it has given away the Guwahati airport to a private party; because it has completed the National Register of Citizens; because people have got the Rs 15 lakh in their accounts; because two crore people across India, including 26 lakh in Assam, have got jobs. Another reason, he said, will be the contentious and anti-Assam Citizenship (Amendment) Act. In short, Bora accused the BJP of peddling lies and doing the opposite of what it had promised before storming to power with its allies in 2016: protect jati (community), mati (land) and bheti (base). Bora has managed to hold the mirror up to the BJP. But the question, a seasoned Congress hand asked, was whether it would oblige by looking at it.

Loyalists in the Congress are still not sure about the timing and process of Rahul Gandhi’s return as party president. Many feel that he should take over before the plenary. Advisers reportedly want him to take over in December itself by acceding to the Congress Working Committee request instead of waiting for the All India Congress Committee meeting in January-February. But this option could have lesser legitimacy than the regular process, preferably an election. The fear is that an election without Rahul’s control over the party will allow dissenters to make the election of most of the younger leaders difficult, as they are in no mood to surrender. Sidelining them completely will be a difficult task. Sonia Gandhi, too, is said to favour a balanced approach. Further, there could be a formidable challenge if Rahul were to appoint a president of his choice and run the party from behind the scenes. Senior leaders are convinced there are barely a few talented youths who deserve key organizational roles, as most of them lack the vision and dynamism. The younger lot, however, suspect most of the senior leaders are reluctant to fight Narendra Modi with full force. If Sonia and Rahul do not address the problem before the AICC meeting, the party is in for a hard time ahead.

Mallikarjun Kharge has accused party leaders of forgetting the ideology that helped the Congress grow; the Karnataka veteran reportedly wants young party workers to be taught about the Congress’s ideology by the seniors through the narration of stories of sacrifices made by its founding fathers. But those who disagreed with Kharge’s chiding allegedly questioned his absence from campaigns for the recent bypolls that the Congress lost. They say he could have made a difference.

Why Shah's focus on Bengal is telling