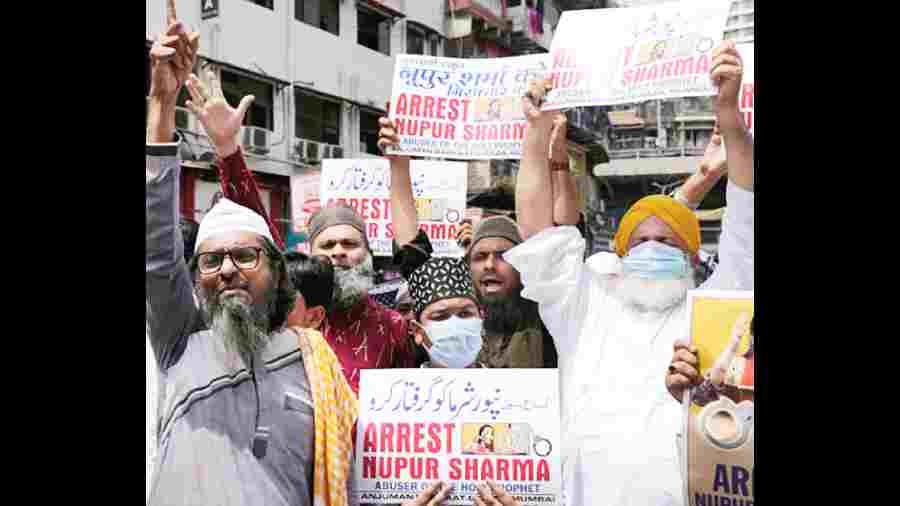 Media culpability can damage a country’s interests. Two recent instances will suffice to illustrate the point. The media’s role in recent events triggered by a Bharatiya Janata Party spokesperson’s remarks on Prophet Mohammed has received less attention than it deserves. The focus has been on the offending spokesperson. There was mayhem across the land on account of a television news show. The tally of how much of a law-and-order upheaval a single show can cause is worth revisiting. Forget the diplomatic repercussions in 15-plus countries; it triggered protests in Delhi, Uttar Pradesh, Ranchi, Ahmedabad, Navi Mumbai, Ludhiana, Hyderabad and Jammu & Kashmir. Two people died early on and over 250 were arrested across Uttar Pradesh.

It created havoc in West Bengal, with protesters taking to stone-pelting, setting police vehicles on fire, and damaging public property. Internet services were suspended and prohibitory orders under Section 144 of the Criminal Procedure Code imposed. The deaths were in Ranchi where two victims succumbed to gunshot wounds after the protests turned violent. Over the days, the protests multiplied, and the repercussions from these protests then led to the bulldozer demolition of an activist’s house in Prayagraj.

The offending show was called Gyanvapi Files, and the labelling on the screen told you where the channel stood on the subject — “Denied sach, defiling saboot?” Or “Now, Hindu side’s massive claim...” The dimensions of the  shivling  were constantly flashed on the screen. After presiding over high-decibel hate-mongering, the anchor concluded, “If this country is to be run by the Constitution... if it is not identified and called a Shivling then it cannot be called a fountain as well.” Such irrefutable logic.

The impetus for the manufactured studio heat is commercial, but the damage is real. The process of making religion central to TV news discussions at the slightest provocation was set into motion soon after Narendra Modi was elected and the ruling party’s priorities became clear. By the end of 2015, in a piece called “The fringe element is in our living room”, The Hoot website was able to document the extent to which TV channels had begun stoking Hindu-Muslim fires. Anchors mastered the debate-shaping nature of asking leading questions. Television’s reliance on content that ratchets up conflict has helped make Islamophobia more mainstream.

The country has a News Broadcasting Standards Authority; it has the Telecom Regulatory Authority of India, which extends its remit to broadcasting issues, and it has a Press Council of India.

But among ineffective regulators, complicit media proprietors, an agenda-driven media, and an agenda-driven government, free India’s public sphere has become a sight to behold. The information and broadcasting ministry has not been inclined to rein in over-the-top behaviour, which serves the ruling party’s purpose. It is currently presided over by a minister who has been accused of hate speech in the past.

The culpability of media ownership ensures that the country’s leading media organisations will neither let their reporters do their job fearlessly or go public with the pressures they face from the government and the ruling party. In recent years, both print and digital media have allowed the government to pressure them to stop documenting hate — with a mainstream newspaper easing out its editor in 2017 — in return for government advertising revenues and the participation of ministers in their sponsored events. If television has turned away from issues of relevance, the print media has become cautious.

Why does this government get a free pass on so many issues? Because the self-censorship that has built up since 2014 is becoming second nature. That too is media culpability of a different kind.

Earlier this month, accusations of crony capitalism regarding a project given to the industrialist, Gautam Adani, stirred up protests in Sri Lanka but you would have scarcely noticed it, so little coverage did it receive here. Newslaundry and NDTV reported that on June 9, the electricity amendment bill was passed in Sri Lanka’s Parliament. A renewable deal for wind power with India’s Adani group was mentioned during a parliamentary debate in the bill.

The next day, the chairman of the Ceylon Electricity Board told a parliamentary committee that Prime Minister Narendra Modi had been pressuring the Sri Lankan government over the allotment of a wind power project to the Adani group. He said that the Sri Lankan president, Gotabaya Rajapaksa, had told him in November 2021 that Modi was “pressuring him to hand over the project to the Adani group”.  After the president denied this, the official resigned but NDTV accessed an earlier letter from him to the Lankan finance ministry to fast-track approvals to the 500-megawatt renewable energy project in Sri Lanka’s Mannar district citing “directions by the (Lankan) Prime Minister” to recognise the Adani proposal as one from the Indian government to the Sri Lanka government.

There was opposition to the deal in Sri Lanka from the political Opposition and the trade unions. When the evidence from the electricity board chairman to the parliamentary committee was reported, citizens’ protests began in Colombo. It was alleged that the amendment in the Sri Lankan Parliament was passed to facilitate the deal without competitive bidding. NDTV carried a Bengaluru-based report on the opposition building up.

Newslaundry took a look at how the business press in India was covering it: most stuck to a single PTI report. Neither general nor business newspapers have seen it fit to report extensively on this story. It is the Sri Lankan media which has done so. Then again, nobody here saw it fit to link this news to the earlier instance of the prime minister pushing Anil Ambani as a partner for the Rafale deal with the former French president. That story was  documented  by French journalists in 2018. But alleged crony capitalism is not something that the Indian press is going to town with.

The power of the news media to damage the country’s fabric is, evidently, greater than its power to hold the government accountable.