The US withdrawal has left Afghanistan in a mess 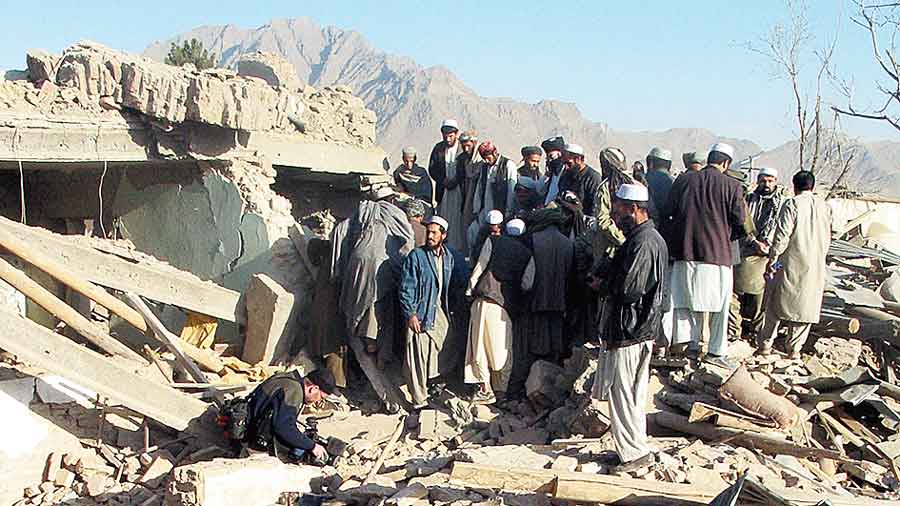 In an irony of sorts, the Taliban, which had sheltered the leadership of al Qaida and were in power when the United States of America was struck by terror attacks on September 11, 2001, came back to power in Afghanistan days before the twentieth anniversary of the 9/11 attacks.

President Joe Biden had opposed the military surge in 2009 in Afghanistan as the then vice-president and there was little doubt that  he would honour the agreement that was reached with the Taliban by the former president, Donald Trump, in February 2020. However, Biden is facing mounting criticism as thousands of Afghans are trying to flee that country desperately. At least 150 people, including several US troops, were killed after suicide bombers attacked Kabul airport even as people continued to try and leave the country. The New York Times reported that “[m]ore than a million Afghans who remain in the country... could be eligible for expedited immigration status.” It added that these are people “who worked with the U.S. government or American organizations over the past 20 years and their families are eligible for special visas” on account of possible “retribution from the Taliban”. Implicitly, this means more than 2.5 per cent of the country’s population belongs to this category.

The failure in Afghanistan is multi-dimensional as there are non-military vectors that have contributed to the ongoing mess.

First, the current domestic political polarization in the US can skew both the substance and the pace of foreign-policy decisions by the incumbent president in a particular direction even though this is the first year of the Biden presidency. Given that the memory of the Trump presidency has not faded completely, including his disregard for institutional checks and balances, the stakes are high for the Democratic Party not to concede any political space to the Republicans. In this context, foreign policy would not be immune to the ongoing existential battle between the two parties.

Among swing voters in the American mid-West, where a large number of locals join the army, the appetite for foreign wars and risk is minimal. Trump’s decision to withdraw from Afghanistan was favoured in the mid-West and he did well in this belt in the presidential elections of 2016 and 2020. From an immediate standpoint, the ruling Democratic Party faces a challenge of retaining a narrow Congressional majority in the upcoming mid-term elections, which are just over a year away. In this environment, Biden rushed through the withdrawal of the American troops without calibrating the decision with the fast-changing adversarial conditions on the ground. The decision to withdraw by a specific date hints at domestic political calculations.

Second, the assumption that the Taliban were prepared to reconcile with others, including Pashtun and non-Pashtun leaders of Afghanistan, proved to be wrong. The dialogue with the Taliban had started under the watch of the former president, Barack Obama, with Richard Holbrooke appointed as the first special representative for Afghanistan and Pakistan (2009-2010). His tenure was nearly a non-starter as Obama never developed a liking for his style and approach, particularly his reported comparison of the situation in Afghanistan to the US campaign in Vietnam in the 1960s. After protracted negotiations, it was the Afghan-American and veteran of several Republican administrations, Zalmay M. Khalilzad, who facilitated a poorly negotiated agreement with the Taliban in Doha in February 2020, toeing Trump’s instructions to withdraw troops by a certain deadline.

Meanwhile, in line with the Doha agreement, Taliban spokespersons have repeatedly said that Afghanistan’s soil will not be used against any country. The reality, however, is quite complicated. In an ecosystem of fragility, anarchy and religious extremism, Taliban-ruled Afghanistan can potentially act as a magnet for other terrorist outfits. A June report of the United Nations security council sanctions regime under Resolution 1988 — relating to the Taliban — as well as a July report of the sanctions regime under Resolution 1989 — pertaining to the Islamic State in Iraq and the Levant (Daesh) and al Qaida — have, on the basis of inputs made by member states, underscored the same view in different words.

The common objective of all non-State actors is to grab power. But the presence of al Qaida and Daesh provides an extra layer of complexity to the situation in Afghanistan. The Taliban are mostly Pashtuns. Their foot soldiers belong to the larger Ghilzai tribe present in the southern and the eastern parts of the Afghanistan-Pakistan border. They are products of Deobandi seminaries in Pakistan and in Afghanistan. Founded in 1866, the Darul Uloom in Deoband, India, was one of the first seminaries to train in Deobandi Islam. Deobandi clerics had refused to seek funding from the upper echelons of society or even the State and, instead, sought funds from the lower classes. The class appeal of Deobandi Islam was one of the potent instruments that helped it to spread to various parts of the subcontinent. One such area was the Pashtun-inhabited territory on both sides of the Durand Line. (Deobandi scholars in India had emphasized to this author a few years ago the differences in the contemporary syllabi and orientation between those in India and the ones in Afghanistan and Pakistan.)

De facto, some of the sub-groups of the Taliban, including the Haqqani group, have connections with al Qaida given the intersections in their ideologies, familial connections and shared struggles in the past. The regional affiliate of the ISIS, the Islamic State-Khorasan is relatively more takfiri in doctrinal terms — narrower in the interpretations of the sharia — and considers non-conformist Muslims to be apostates. Although the organization in the region is presently led by the Iraqi national, Shahab al-Muhajir, most of the cadre are from Afghanistan and Pakistan, with a few recruits from India and Bangladesh. The Taliban recently assassinated the imprisoned IS-K leader, Mawlawi Zia-ul-Haq, who hailed from the Kunar province near the border with Pakistan. The Kabul airport attack has been attributed to the ISIS’s regional affiliate, which surfaced in 2015 in Afghanistan. This opens up new possibilities of covert cooperation between the US and the Taliban to degrade their common enemy, the ISIS, in the region.

The US exit leaves behind a far more complicated landscape in Afghanistan, with the country turning into a cesspool of numerous non-State actors cohabiting, and at war, with one another. As the recent developments bear out, the upcoming twentieth anniversary of the 9/11 attacks has not quite ended the US’s ‘war against terror’ in Afghanistan and in the region.

Luv Puri is the author of Across the LoC