Advertisement
Home / Opinion / The Supreme Court as the ultimate arbiter

The Supreme Court as the ultimate arbiter 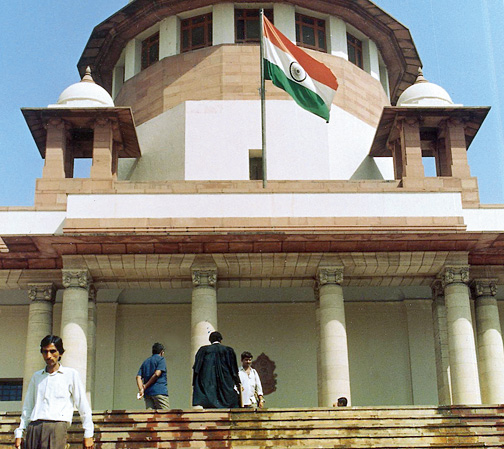 It is difficult to think of another period in the life of independent India when the course of the public discourse has been so decisively shaped by judicial verdicts. The rush of Supreme Court judgments in September may have been dictated by the need for the former Chief Justice of India, Dipak Misra, to clear his desk before retirement. However, the overall effect of the many judgments covering aspects of India’s political and social policies has been nothing short of dramatic. More than the effects of the September 2018 judgments on national life, the sheer number of far-reaching judgments has conveyed an impression that the judiciary is the ultimate arbiter of what is good or bad for the country. The impact this will have on the standing of governments and, indeed, the principle of representative democracy is still uncertain. If the principle of separation of powers involved a delicate balance among the executive, legislature and the judiciary, the judgments of September 2018 appear to have rejigged the scales in favour of judicial pre-eminence.

Arguably, such a conclusion may appear a little overstated. In many of the cases, the Supreme Court was quite categorical that it was not contesting the right of the legislatures to make laws but merely proffering its views on what should be desirable laws. In the petition seeking to debar individuals against whom there are pending cases of a criminal nature, the Supreme Court did suggest that the legislatures should act quite decisively to modify the absolute right of people to be seen as innocent unless proven guilty in a court of law. Of course, the elected representatives are under no obligation to heed this advice. In the past, the highest court has often decreed that a uniform civil code, as desired by the Constitution in its Directive Principles, is a crying need to remove discriminatory practices. This was an observation in the Shah Bano judgment more than three decades ago. However, electoral politics has its own logic and the country is nowhere close to even formulating a draft, non-denominational civil code, never mind debating such a proposal in Parliament.

Again, in its decision on the petition challenging the introduction of Aadhaar, particularly the collection of biometric data by State agencies, the Supreme Court did focus principally on the scope of a money bill. Even Justice Chandrachud’s dissenting judgment did not contest the right of Parliament to enact legislation to ensure rigorous verification of the identity of citizens. In fact, there is an implied suggestion in its judgment that if a new Aadhaar bill was passed by both the Lok Sabha and the Rajya Sabha, many of the steps that the Supreme Court thinks were overreaching the scope of a money bill — the Aadhaar-linkage of mobile phones, for example, has a definite security dimension — can be restored, albeit with some much-needed data protection safeguards. If the Narendra Modi government is re-elected in the general election next year, it should seriously consider a comprehensive Aadhaar bill that doesn’t suffer from the limitations of a money bill.

Possibly the only hint that the judiciary sees itself a notch above the elected representatives of the people was in Justice Chandrachud’s minority judgment that questioned the absolute right of the Speaker of the Lok Sabha to determine what should and what shouldn’t be regarded as a money bill. Had this been a majority view, it would have triggered a frontal confrontation between Parliament and the Supreme Court and created a possible constitutional crisis. However, the judgment was marked by exemplary constitutional restraint.

The more problematic areas concerned the judgments decriminalizing gay relationships and adultery. In terms of social values, the judgments unquestionably sent out the message that discrimination on the basis of individual lifestyles and gender was unwelcome in the India of the 21st century. However, there are two troubling and unanswered questions.

First, in an ideal world, the responsibility for the modification of criminal laws is vested in the legislatures. True, neither of these two provisions of the law was the doing of members of parliament of independent India. They dated back to British rule and reflected the social values of a bygone age. Yet, the fact is that these so-called acts of criminality were law for 70 years of free India. Does the inability or unwillingness of Parliament to scrap these repugnant strictures on personal conduct imply anything more than a lack of application?

In the life of this Parliament, for example, there has been a private member’s bill seeking the decriminalizing of gay sex but this was voted down. There was, however, no government bill at any point in the past 70 years seeking the removal of Section 377 of the penal code. Would such a bill have been passed? Most likely it would not.

The question therefore arises: to what extent should the courts take heed of representative opinion on aspects of social behaviour? This issue has also come to the forefront in the context of the judgment on the Sabarimala temple case. In Sabarimala, the exclusion of women from worship inside the temple premises was centred on beliefs surrounding the deity. These beliefs have a very long history and form a part of the religious culture of Sabarimala.

That the exclusion of women from the shrine for biological reasons is unfair is undeniable. But worshipping at Sabarimala is voluntary and not guided by any statutory obligation. Those who worship have done so keeping the beliefs associated with the deity in mind. At the same time, the sheer importance of Sabarimala among Hindus of southern India is well recognized. The temple is not a private shrine. Like Tirupati and Guruvayur, it has become a public place attracting lakhs of worshippers. The state machinery is involved in the management of the shrine. In that case, should the temple be seen as a public place and be regulated by the norms that govern public places? The Constitution does allow for legislatures to curb discriminatory practices in places of religious worship — a provision that is rooted in the various temple entry movements during the national movement. To what extent does this affect the right of self-regulation of Hindu institutions? Minority faiths are largely protected from outside interference except, as recent Supreme Court judgments decree, in matters of gender discrimination. These are questions that will come to the fore in the coming days. Hindu bodies have announced their determination to contest the judgment, both through a review petition and otherwise.

There is another unintended consequence of the Supreme Court verdict that needs consideration. In the past, statutory changes in religious and social practices had combined a top-down and bottom-up approach. Legislation had invariably been preceded by vigorous movements demanding change and reform. Mahatma Gandhi was a big force behind the temple entry movements and the eradication of untouchability, Har Bilas Sarda’s age of consent bill was accompanied by a spirited debate in Hindu society, and even Jawaharlal Nehru’s big reforms in Hindu personal laws had a major extra-parliamentary dimension. By contrast, neither the Supreme Court order on opening the Jagannath temple in Puri to non-Hindus nor the Sabarimala judgment was preceded or accompanied by stirrings in society. There was no real grass-roots demand for change. Change has happened because of a court order.

The implication is clear: the courts are becoming unwitting support systems for activists who are hardly representative of public opinion. In democracies, change involves persuading ordinary people that a departure from the past is desirable and necessary. In today’s India, it has come to imply persuading the courts.