Just like the non-recognition of marital rape as an Indian reality, it is politically convenient to decry the debate on same-sex marriage as an import from the West 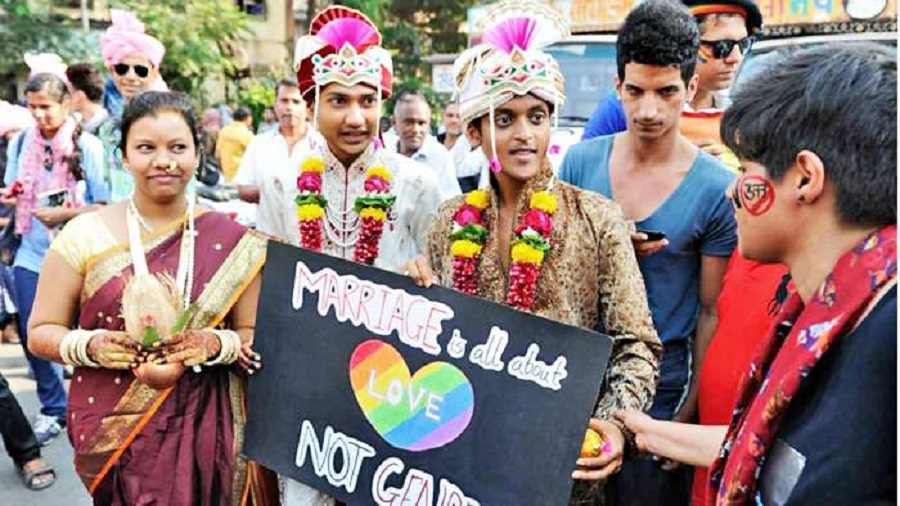 The fulcrum of the debate on same-sex marriage is based on the liberal principle of justice.
Sourced by The Telegraph
Anita Tagore   |   Published 27.06.22, 03:36 AM

Debates on same-sex marriage in traditional societies such as ours have more to do with cultural moorings than logically conclusive arguments. Prima facie, marriage is the most prominent form of cohabitation accruing legal benefits. It has evolved to become an institution regulating family life, sex and reproduction.

There are regional diversities in marriage practices in the global context. However, one common justification for marriage is the logic of reproduction. It assumes that marriage can only take place between a heterosexual pair. This, in turn, has led to the naturalising of hetero-normative frameworks of sexuality. As a site for patriarchal domination, marriage and family prioritise the roots of procreation.

The fulcrum of the debate on same-sex marriage is based on the liberal principle of justice. The sexual orientation of same-sex couples is usually highlighted to repudiate such unions. This unequal treatment stems from sex-based discrimination. It challenges the idea of equal citizenship and creates an inferior category of second-class citizens. It also vetoes the direct and indirect resource benefits that marriage accrues from its legal and institutional primacy, such as social security, right to privacy, property rights, guardianship, health insurance, pension benefits and so on for same-sex couples, leading to systematic exclusion.

In India, marriage is a family-centric entity. Prevailing cultural mores and politics perpetuate prejudiced sentiments within the family. Just like the non-recognition of marital rape as an Indian reality, it is politically convenient to decry the debate on same-sex marriage as an import from the West.

The courts, too, have oscillated between moral imperatives and substantive justice. They have accepted — only sporadically — an expansive notion of fundamental guarantees of the Constitution to reject discrimination based on sexual identity. In 2018, the Supreme Court read down the archaic provisions of Section 377 of the Indian Penal Code in Navtej Singh Johar vs Union of India, thereby decriminalising homosexuality as an offence and legitimising samesex relationships. However, it refrained from spelling out the validity of same-sex marriage. Not tying up the loose ends has led to litigations on the potency of same-sex marriages in India. Worryingly, august institutions have often taken contradictory positions.

In Abhijit Iyer Mitra vs Union of India, despite the possibility of a creative interpretation of the term, ‘persons’, as parties to marriage in the Hindu Marriage Act, the Centre adopted an obscurantist position and argued that ‘legitimate State interest’ lies in limiting the recognition of marriage among persons of the opposite sex only.

In 2020, the Orissa High Court allowed a same-sex couple to continue to cohabitate — but in a live-in relationship. In a welcome move, the bench of Justice N. Anand Venkatesh of the Madras High Court identified the need for psycho-education to enable him to move beyond his own pre-conceived ideas while hearing a case concerning a same-sex couple. Evidently, in most cases, the norm has been to encourage institutional reaffirmation of heterosexism in the case of marriage. There is an inherent danger emanating from the State legitimising some kinds of consensual adult relationships over others and its endorsement of the heterosexual model of marriage — this limits the possibility of the family achieving diverse forms.