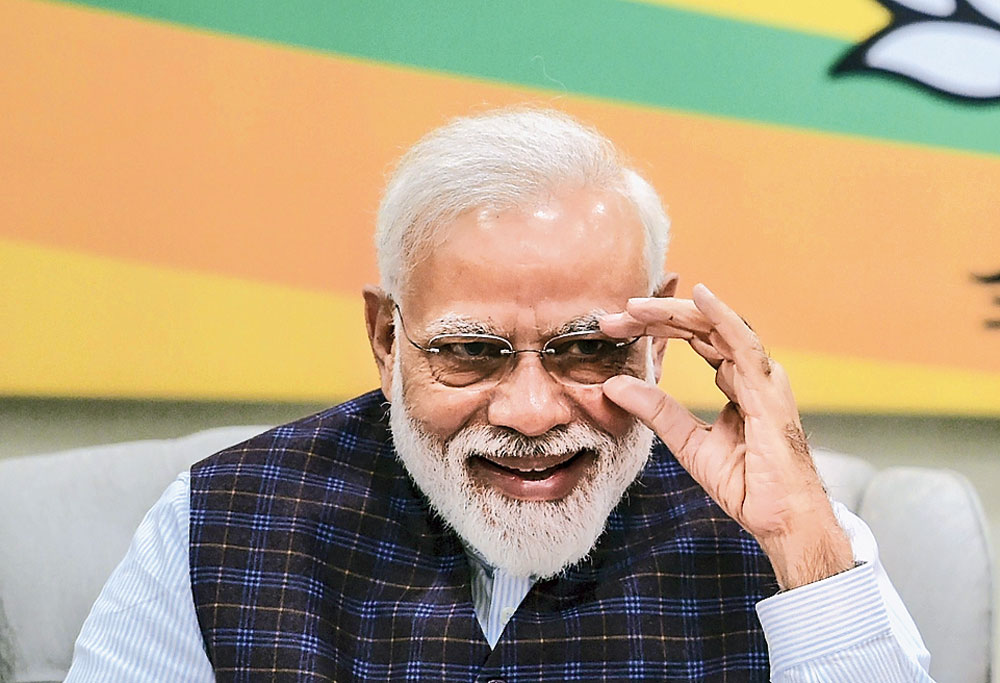 The papers reveal how brazenly the Prime Minister’s Office rode roughshod over the Indian negotiating team by offering unprecedented waivers in offset agreements, and the changes made by the Narendra Modi-led government seem like mala fides
(PTI photo)
The Telegraph   |     |   Published 17.04.19, 11:19 AM

Sir — The Supreme Court’s decision to allow the leaked documents published by a newspaper to be used by the petitioners seeking review of the December 2018 Rafale judgment will go down as a landmark ruling for the freedom of the press (“The right to publish”, April 11). The court dismissed the Centre’s ill-advised preliminary objections claiming “privilege” over them. The effect of the ruling is that the classified documents sourced without authorization by the author of these articles can be considered evidence and a basis for re-examining the earlier judgment dismissing a plea for a probe into the deal.

The papers reveal the brazen manner in which the Prime Minister’s Office rode roughshod over the Indian Negotiating Team in a flagrant violation of the Defence Procurement Procedure 2013 by offering unprecedented waivers in offset agreements. These changes made by the Narendra Modi-led government seem like mala fides. Further, the dilution of the provisions of the DPP 2013 related to arbitration, barring access to books of accounts, dispensing with penalties for use of undue influence and commission agents shows how the seller dictated the terms in their favour, instead of the buyer having an upper hand in a defence deal of such proportions. These seem to have compromised our national interest. The petitioners must now convince the court that the entire acquisition process suffered from the vice of gross irregularities, warranting a probe in public interest.

Sir — The way in which Narendra Modi quietly wrapped up the negotiations related to the Rafale deal with the former French president, François Hollande, raised many eyebrows. The deal was signed in 2016, but it was in September 2018 that it garnered widespread public attention when Hollande revealed that the Indian government had pressured Dassault to partner with Anil Ambani’s Reliance Defence to meet its ‘offset policy’. Controversies followed as the Opposition demanded the prime minister’s resignation, and the matter was referred to the Supreme Court. However, the court had at first dismissed demands for an investigation into the deal.

In reality, the government seems to have spared no effort in covering up the matter, from rejecting a joint parliamentary committee probe as suggested by the Opposition to creating confusion regarding the disclosure of prices for the comptroller and auditor general’s report.

But things have taken a turn once again, thanks to the documents published by the media regarding the contentious pricing of the jets and the objections raised by the INT about parallel negotiations conducted by the PMO. Although the Centre tried to prevent the admission of these documents as evidence in court by dubbing them “stolen”, a three-judge bench of the Supreme Court has now unanimously decided to hear the Rafale review petitions on their basis. The upcoming hearings could uncover additional evidence against the ruling dispensation, and provide the Opposition with the appropriate ammunition to secure an advantage with regard to the ongoing elections. One hopes that the apex court, as the enforcer of democratic norms in our country, will be able to wipe away the black clouds of corruption from India’s sky.

Sir — The Supreme Court has been just in allowing the use of the three leaked ‘classified’ documents as evidence in the Rafale review case, dismissing the government’s objections. The monumental efforts undertaken by Yashwant Sinha, Arun Shourie, Prashant Bhushan and N. Ram to expose the murky Rafale deal deserve accolades. One hopes that the case will soon be brought to its logical end after the recently procured evidence, shedding light on the wilful defaults in the surreptitious deal, is examined. The culprits must be brought to book.

Sir — The recent episode regarding the Rafale deal proves the might of investigative journalism in contemporary India. No wonder then that the government tries to stifle the voice of the media in order to hide its shady activities.

Sir — This year, Calcutta welcomed the Bengali new year by celebrating nabo barsho alongside World Art Day. Kumartuli, the artisans’ hub that gains attention only once a year — around the time of Durga Puja — attracted art enthusiasts from across the city with the help of an art festival. The idea of putting local artists in the limelight was appreciable. The colourful artwork and installations that decked the narrow lanes of Kumartuli are proof that the talent of these artists is not limited to idol-making. The organizers should turn this into an annual event.