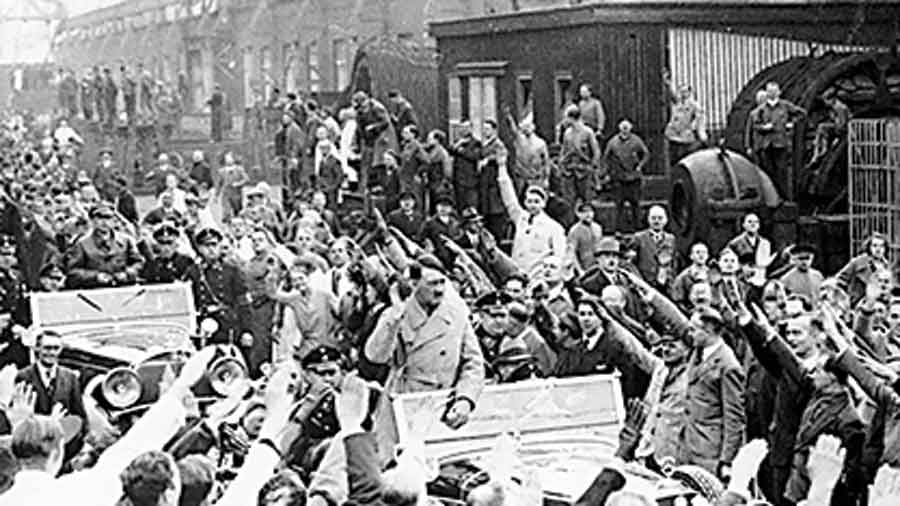 Historians of Nazi Germany have always been troubled with one central question: how could one of the most advanced, sophisticated countries of Europe descend into the depths of barbarism in such a short span of time, culminating in the murder of millions of people? Some historians, called the intentionalists,  emphasized the importance of Hitler’s master plan as outlined in Mein Kampf, while other historians, called the functionalists, minimized the importance of Hitler and focused on the Nazi party machinery.

The British historian, Sir Ian Kershaw, one of the most influential historians of Nazi Germany, synthesized these two approaches in his theory of “cumulative radicalisation” to explain the horrors of Nazi Germany. The radical and inhumane atrocities committed by Nazi Germany, according to Kershaw, were not dependent on the directions of Hitler, but grew out of the initiative of party bosses, bureaucrats and professionals who drew on his charismatic authority. “...Hitler’s authority gave implicit backing and sanction to those whose actions, however inhumane, however radical, fell within the general and vague ideological remit of furthering the aims of the Fuhrer,” wrote Kershaw.

Thus, in Kershaw’s telling, the increasing radicalization of Nazi Germany, the accelerating “erosion of civilised values” and “spiralling radicalisation of discrimination and persecution”, was driven not just by ideological extremism but also by competition within the party and State machinery for “power, prestige and enrichment”. Social and political advancement depended on “working towards the Fuhrer” (a phrase Kershaw borrows from a Nazi minister). This phrase denoted activist action, carried out by both State and civil society actors, to realize the vision of Hitler. The ill-defined nature of Hitler’s ideological vision (‘racial purity’, ‘national redemption’) and the non-interventionist style of Hitler perfectly suited this ‘cumulative radicalisation’ as the followers of the Fuhrer, with often conflicting social motivations, sought to outdo each other in radical programmes of persecution. “One might denounce neighbours to the Gestapo, slur a business competitor’s ‘Aryan’ credentials, or nominate patients for the euthanasia program: this was all ‘working towards the Fuhrer’.” Kershaw contrasted this chaotic authoritarianism with the more programmatic authoritarianism of Stalinist Russia.

India is, of course, not quite Nazi Germany on the brink of Holocaust, but this concept of ‘cumulative radicalisation’ is a useful mechanism to explain the country’s plunge towards the kind of violence and persecution that has been the hallmark of the Narendra Modi regime. The Modi government has not introduced a new system of governance. We have the same Constitution and the same governing institutions. Yet, over these last seven years, it has managed to transform the political culture in such a way that important functionaries in both State and civil society are incentivized to undermine the rule of law and the principles of equal citizenship as long as it appears to be in consonance with the political vision of Modi and his party.

Most metrics of India’s ‘growing authoritarianism’ derive from the executive actions of the government or the laws passed by Parliament. These might include laws such as the Citizenship (Amendment) Act, the UAPA Act, 2019 or the new internet rules compromising the privacy mechanisms of social media providers. Yet, this ‘radicalization from above’ is only part of the story. Equally, if not more, important is the ‘radicalization from below’. These are the actions of fairly low-level party functionaries, policemen, government bureaucrats, lawyers, judges, journalists and right-wing vigilantes who are shaping the reality of the country everyday through their individual actions.

A few incidents just over the last month can be furnished as evidence of India’s accelerating pace of radicalization where persecution of Muslims has assumed an endemic character. In Indore, a Muslim family of eight was attacked by Hindutva mobs in order to force them to leave their village. The police filed a first information report not just against the alleged perpetrators but also against their victims, a family of blacksmiths. In Indore city, four Muslim students were arrested for the crime of participating in a college garba event. In Assam, two Muslims were shot dead by the police during an eviction drive that is part of a State policy, which disproportionately targets Bengali-speaking Muslims. Across three northern states, Hindutva groups roamed the streets forcibly closing Muslim-owned meat shops during the festival of Navaratri.

There is a common thread linking all these incidents — the role of the local police and bureaucracy in implementing, protecting or sanctioning various forms of violence against Muslims. Under the current regime, the State machinery is slowly freeing itself from the binds of the rule of law and embracing the insidious dynamic of vigilantism.

The political scientist, Pradeep Chhibber, professor at the University of California, Berkeley, provided the clearest articulation of this political culture of vigilantism in an article earlier this year which merits being quoted at some length here. “The vanguard of this (Modi) regime are legions of vigilantes; these are ordinary citizens, businessmen, journalists, and of course, bureaucrats. They are the new regime’s foot soldiers, led not by the government openly, but by low-level officials and ordinary citizens seeking to ingratiate themselves with the powerful,” wrote Chhibber.

Surveying events such as the arrest of the climate change activist, Disha Ravi, the Delhi police’s atrociously partisan investigation of the Delhi riots, and the attacks on movies and television shows, Chhibber concluded that “[i]n many of these cases, there is often no high-level directive from the government or top party leadership.” In a passage that strongly echoes the concept of Kershaw’s ‘cumulative radicalisation’, Chhibber underlined the internal logic of the new vigilantism: “Mid-level bureaucrats, police officials, local politicians, and activists take it upon themselves to enthusiastically promote what they perceive to be the government’s interests. These individuals want to prove their loyalty through actions they perceive might enhance their political or career chances.”

Almost all institutions of the country — the media, judiciary, security agencies, tax agencies — have become increasingly corroded by this logic of ‘cumulative radicalisation’. To these can be added the Narcotics Control Bureau, where overzealous officers are presently carrying out a crusade against Bollywood in the name of curbing the menace of drug consumption. When Sameer Wankhede, Mumbai zonal director of the NCB executed the raid that led to the arrest of Aryan Khan, the son of Shah Rukh Khan, he must presumably have been cognizant of the satisfaction of his political masters at the prized catch. The quantity of drugs recovered were quite insignificant, and there is purportedly no direct evidence of the culpability of Aryan Khan. However, Wankhede has managed to bring the most prominent Muslim man in the country to his knees, which ultimately might have been the point, as the presence of a local BJP politician in the raid party suggests.

This ‘cumulative radicalisation’ is nurtured by the strategic silence of Modi, allowing his underlings and followers to interpret his will and compete for his favours, while escaping responsibility if things go sour. His vision of a ‘Hindu rashtra’ is never explicitly spelt out, but only signalled, especially through appointments to high office. Perhaps the most consequential policy decision of the Modi years has been installing Yogi Adityanath, a controversial monk then mainly known for running a violent anti-Muslim outfit, to the throne of Uttar Pradesh. As the political journalist, D.K. Singh, has written, Yogi Adityanath has since emerged as the model for all other BJP chief ministers and seeded a perverse competition among them on who can go the furthest in clamping down on dissent and persecuting Muslims.

A good example is Himanta Biswa Sarma, who has started the first six months of his tenure as chief minister by imposing a stringent cow slaughter ban, allegedly encouraging fake encounters, slapping UAPA charges over social media posts and intensifying eviction drives of Bengali-speaking Muslims. Since Sarma comes from a Congress lineage, it stands to reason that personal advancement in the party rather than purely ideological motives lie behind his radicalism.

The story of ‘New India’ is not being written by Modi alone; some of its pages are being written by people like Himanta Biswa Sarma and Yogi Adityanath; and still others are being written by innumerable obscure Indians, be it a judge denying bail to dissidents or Dalit activists, or a journalist spreading invidious propaganda against farm law protesters, or a policeman arresting Muslims on trumped-up charges. Yet, all of them are, in a sense, ‘working towards Modi’ and towards his party. ‘New India’ is being constructed on the building blocks of ideological extremism and is cemented by the greed of those who wish to prosper from it. This is the ‘cumulative radicalisation’ which opens the door for all kinds of atrocities.