The price of dogma

Leninism lives, even if communism is dead 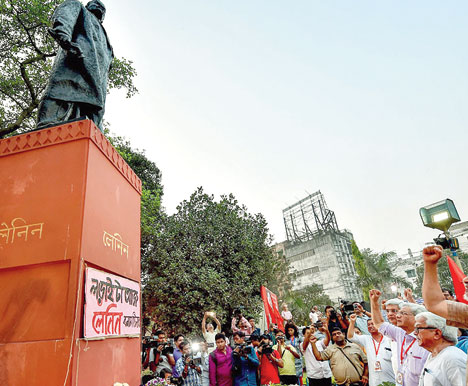 Here is a counter-factual: what if the Communist Party of India (Marxist) had installed statues of Bhagat Singh in Tripura? Would they have been vandalized by the BJP cadre after the CPI(M) was voted out of power in that state?

A year ago, I had lunch in Bangalore with a historian who is a member of the CPI(M). He is a fine scholar with a ready wit who loves cricket, so notwithstanding his communist faith, I am fond of him. I asked why, at his party's conferences, the four portraits on display were of two 19th-century German thinkers - Marx and Engels - and two 20th-century Russian dictators - Lenin and Stalin. Surely, I asked, an Indian party should have some Indian icons? Why couldn't they put up Bhagat Singh at least?

Bhagat Singh was both an Indian and a Marxist. Yet, because the official Left had largely forgotten him, he was being resurrected and praised by Hindutvawadis. How, I asked my historian friend, did the CPI(M) allow this? He agreed with me, and said he would raise the matter with the higher-ups in his party. But it seems he got nowhere.

There are two reasons why the CPI(M) venerates Lenin and Stalin far more than Bhagat Singh. One is inertia; having been brought up from an early age to worship them, they cannot think of doing otherwise. Just as boys raised as Vaishnavites can never see anything good in any other god but Vishnu (or his avatars), so devout Marxists stay dogmatically with their childhood Gods as they grow into adulthood and beyond that into dotage.

The second reason why Bhagat Singh remains a minor figure in the CPI(M)'s pantheon is that the party traces its origins to the undivided Communist Party of India, and the Sikh radical was not a member of the CPI. He was, rather, part of a different formation called the Hindustan Socialist Republican Association. The CPI had a base among workers in Bombay and Calcutta. The HSRA, on the other hand, was more active in northern India. So, although Bhagat Singh was a Marxist, since he was from the HSRA and not the undivided CPI, the CPI(M) may be reluctant to put up his portrait at party conferences.

The Bharatiya Janata Party's objection to the presence of Lenin in Tripura is that he was a foreigner. Indeed, a newspaper quoted a BJP worker as saying that if the statues had been of the Tripura communist, Nripen Chakraborty, they may not have been vandalized. However, the problem is not that Lenin was a foreigner, but that he was not a democrat. Lenin was a tyrant, a despot, who first subordinated his country to his party before subordinating his party to himself. He had his enemies and rivals killed, placed curbs on the freedom of intellectual and artistic expression, and paved the way for the even more brutal dictatorship of Stalin.

I do not share the BJP's xenophobia. Rather, I believe with Rabindranath Tagore that we should glory in the illumination of a lamp lit anywhere in the world. Great human beings transcend national boundaries. I would be happy to have statues of (for example) Nelson Mandela, Martin Luther King and Václav Havel installed in our cities and towns. But living as I do in a democracy, I would draw the line at dictators.

Lenin, incidentally, would have been a super-troll in the Age of Twitter. For he was a vindictive man, abusive in his writings and in speech. His hatred was not reserved for the bourgeoisie; socialists who disagreed with him were savagely set upon as well. Among those who attracted Lenin's ire was the German Marxist, Eduardo Bernstein, who had rejected violent revolution in favour of peaceful democratic change.

Someone like Bernstein would have been a better model for Indian Marxists than Lenin. For while reformist socialists helped create robust welfare States in the democracies of Western Europe, Lenin replaced the autocracy of the Tsar with the equally oppressive dictatorship of the Bolsheviks. Remarkably, although they have for many decades now participated in Indian elections and run democratically elected state governments, the CPI(M) has still not formally, explicitly, disavowed its belief in a one-party State run on Leninist principles.

Lenin believed that one joined governments only if one could dominate or manipulate them. Working in a spirit of collegiality with other parties and politicians was antithetical to his ideology, as well as foreign to his nature. It is because they were such loyal Leninists that the CPI(M) central committee did not permit Jyoti Basu to become the prime minister of India in 1996. Arguably an even greater blunder was committed in 2004, when their Leninist dogmas inhibited the CPI(M) from joining the United Progressive Alliance government at the Centre. In 1996, Basu would have headed a minority coalition which would have been weak while it lasted, and anyway fallen within a year or two. However, if the left parties had joined the UPA government in 2004, they would have been an integral part of a stable majority that could have run the country for a full five-year term.

Since the Great God Lenin had so long ago mandated that Leninists should not work alongside other parties, the CPI(M) did not join the Manmohan Singh government. They have paid for this error. And the people of India have paid for it too. For, notwithstanding their archaic ideology, communist politicians in India are on the whole more intelligent, less corrupt, less dynastic and less communal than politicians in other parties. Had the best CPI(M) MPs joined the UPA government in 2004, they could have taken charge of ministries such as agriculture and rural development, tribal welfare, and women and child development, working whole heartedly to improve the lives of the poor. They could have used their intelligence and articulation to good effect on television and in Parliament, enhancing their party's visibility and credibility, making it known in the Hindi heartland, far beyond Kerala, Tripura and West Bengal.

The triumphalist supporters of the BJP who brought down those statues of Lenin in Tripura are worthy only of contempt. On the other hand, those who sought to have those statues erected in the first place evoke pity and sadness. Bhagat Singh, living in Lahore in the 1920s, had no way of knowing of the perversions and horrors of the regime that Lenin and Stalin had installed in Russia. But by the late 1930s, the forced famines, the deaths in the camps, and the violence unleashed on political rivals were all well documented. In 1956, the Communist Party of the Soviet Union itself denounced Stalin. In 1989, the Berlin Wall fell, and Lenin was at last (but not a moment too soon) comprehensively rejected in the countries over which he had once ruled. Yet, through these decades, our own communists forgot nothing and learnt nothing. They continued with their craven veneration of these two Soviet dictators. Now, having lost Tripura as well as West Bengal, might we hope that in the next party conference of the CPI(M) one of these Russian tyrants will at last give way to someone like Bhagat Singh?