He returns to people’s thoughts wherever love, freedom and truth are assailed 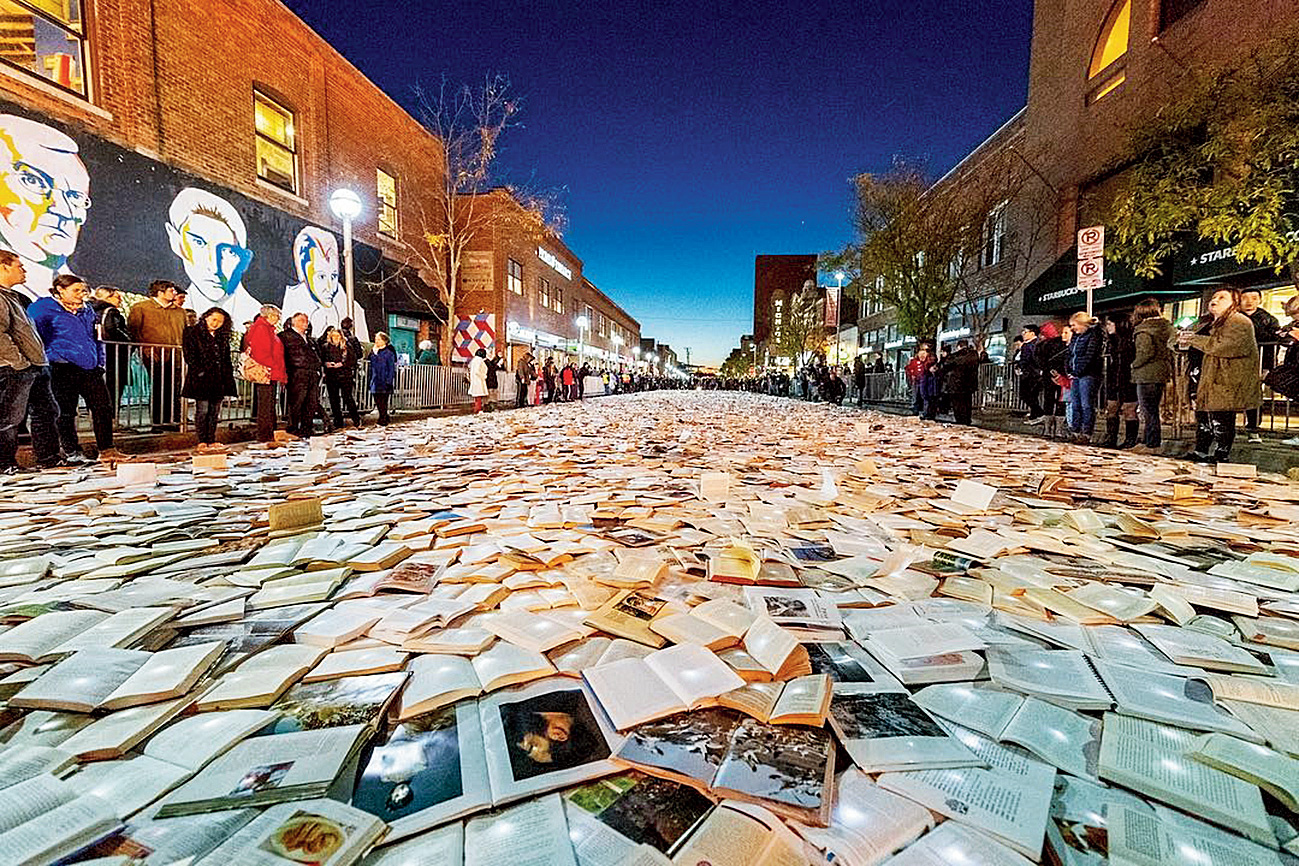 When historical narratives become semantic beggars, anecdotes help in lighting up collective memory. Some years back, I was in Berlin. This was the post-perestroika and unified Berlin. As I was walking outside the grand buildings of Berlin University, where Karl Marx had been a student a century-and-a-half ago, I noticed a curious installation. This was just outside the university library. It was designed to take one by complete surprise and shock. On the pavement, as one walked, one suddenly saw a small cavity covered in glass. It was the size of a cellar, or a war-field bunker. Inside it, there was some light, but not bright enough to show at once what was inside. As one peered into the dimly lit room under the glass roof, one noticed a single shelf of books, with no books on it. Perhaps, just one or two books were on the shelf, lying lifeless. The inscription placed next to the glass surface read, “This is the place where Adolf Hitler burnt books of many thinkers in May 1932 after dragging them out of the library.” The inscription brought home the brutality of the regime that took pride in attacking free thought. The installation was an apt statement for the tradition of Marx brutalised by Hitler.

The eloquent installation has remained in my memory as an unforgettable experience. It suddenly surfaced again when sometime ago I walked past a similar installation. This time, it was in Michigan, a bastion of free thought, fighting to preserve its identity in the present regime in the United States of America. This installation, created by the little-known Luzinterruptus arts-collective in Spain, was made up of 10,000 books spread on Liberty Street. They were opened, as if someone had been reading them, but was only halfway through. Many of them were children’s stories, some about text and design and some travellers’ tales. But the larger bulk included books of philosophy. The inscription placed coyly on one side said, “You are welcome to walk over these books, take them away and do what you like with them.” For any book lover, the scene was painful. It brought home with utmost clarity that the phrase ‘post-truth’ means an utter contempt for ideas.

A day after I had passed by the installation in Michigan, the American television channels were reporting how pipe-bombs had been delivered at the CNN office and the residences of Barack Obama and Hillary Clinton. The analysts were unanimous in claiming that this was a moment when the entire nation must condemn in one voice and a joint communiqué be issued to warn the ones who had dispatched those lethal things. They also pointed out that probably it was Donald Trump’s tirade against the democrats that had emboldened the perpetrator to use such violent devices. One would have expected some shade of remorse in Trump’s statement on the horrifying incident. There was none, though, when he actually spoke. Rather, he used the tone of a scolding school teacher and reprimanded Obama and Clinton, “No one should carelessly compare political opponents to historical villains”. This was exactly like Narendra Modi responding to violence involved in mob-lynching or attacks on suspected beef-eaters. Capitalism had many ills; but it had a certain ethical decorum. The post-truth political regimes have turned capitalism more naked by throwing away even the pretence that capitalistic democracy had of being based on consent and dialogue. Criticism and questioning have become bad words in the post-truth crony capitalism of the Trumps and Modis of the world. Obviously, books are here to be trampled upon.

A related anecdote that comes to my mind is about the Kasturba memorial in the Aga Khan Palace in Pune. Kasturba Gandhi died there when she, Gandhi and Mahadev Desai were imprisoned in it at the height of the Second World War and the Quit India movement. Recently, I had the privilege of hosting a large conference in Pune in which writers from 87 countries participated. I thought it would be a good idea to bring the writers to the Kasturba memorial, and so I did. I had imagined that these writers from far-off countries would look at the place, have a few photographs and then would want to leave. To my surprise, they suggested that they would like to sit down on the ground and observe silence as a tribute to Gandhi and Kasturba. The genuine respect and love they inspire even among those who are complete strangers to their work and ideas is phenomenal.

Although Hitler was younger than Gandhi by some 20 years, the two can be seen as contemporaries dominating the world-stage. It was approximately at the same time that Hitler burnt the books and Gandhi defied the colonial salt law and chose to be jailed. It was the same time when Gandhi came up with his idea of ‘civil disobedience’ as a statement of one’s moral courage in the face of injustice and Hitler started demanding ‘complete obedience’ towards the supreme leader. Hitler justified and promoted violence in every form, Gandhi devoted himself to preaching non-violence. Hitler made propaganda the basis of his continued right to dominate, Gandhi spoke of truth as the path towards freedom.

It is an irony of history that the world is celebrating the 150th year of Gandhi’s birth, 2018-19, precisely when the tendencies for which Hitler was known have started characterising rulers in many countries. Was Gandhi’s idea of truth so fragile that the world would forsake it not long after his death? The writers gathered in Pune brought home to me poignantly that Gandhi is still seen by the larger humanity, irrespective of one’s nation, creed, language and race, as the prophet of freedom. He returns to people’s thoughts wherever love, freedom and truth are assailed. The post-truth era in history will no doubt make him sound as relevant as he was in the times of colonialism and Hitler’s festival of violence. No installation will make him look dated and embarrassing, not even the ridiculous official caricature of him only as a pair of glasses for promoting some pet ideas of those who are brought up despising him.

The author is a literary critic and a cultural activist

No installation will make him look dated and embarrassing, not even the ridiculous official caricature of him only as a pair of glasses for promoting some pet ideas of those who are brought up despising him