Packaging waste seems to have been a concern of no railway minister of any party, nor of any bureaucrat 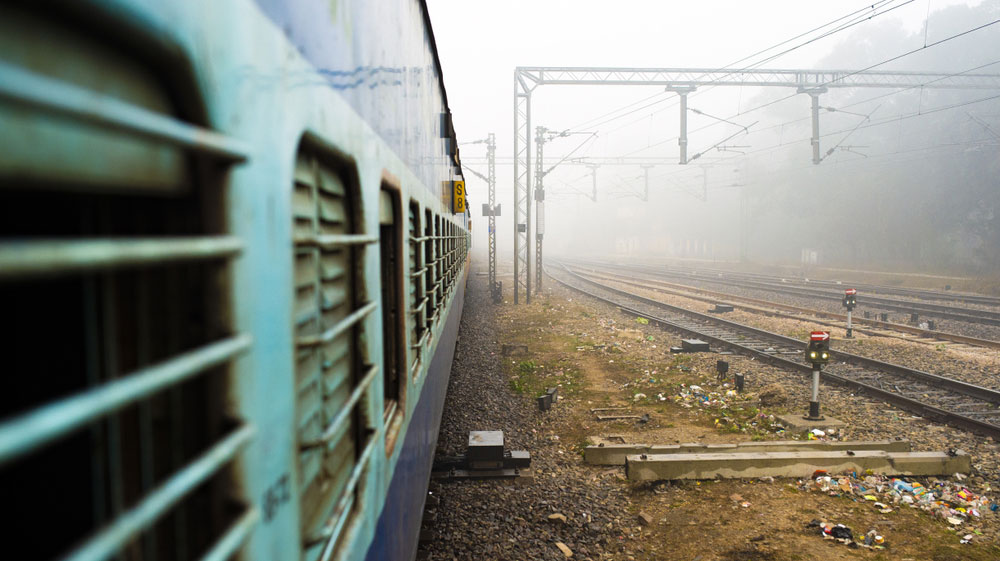 If you made a pile of all the packaging used by a passenger travelling from Delhi to Calcutta across a 17-hour journey you would get a small mountain of plastic ‘prasad’ per person. Now, imagine a few hundred thalis of this lined up on the platform next to the Rajdhani Express
(Shutterstock)
Ruchir Joshi   |   Published 11.06.19, 03:26 AM

As soon as the Rajdhani leaves Delhi, a man comes around with our bottles of Rail Neer and a small bottle of hard plastic containing a thimble of spicy lassi. A bit later he comes back with the tea service: a kachori sealed in foil, a sachet of ketchup, a cake wrapped in hard plastic, tea bag wrapped in clear cellophane, milk powder in a plastic sachet, sugar in paper packet. Dinner is slightly lighter on the cellophane packaging — only the breadsticks are wrapped in it — but the butter is in the typical small plastic tub and there is foil for the rotis, foil to cover the bowls of dal, sabzi and chicken, a sachet containing a teaspoon of pickle and, finally, a small hard plastic cup containing the ice cream. Breakfast the next morning brings further packaging pleasures. The tea comes as described above; the omelette is, again, covered in foil; the butter, ketchup and milk powder are in the same non-biodegradable livery; salt, pepper and sugar in paper packets; and then there is the bread. To be specific, there are two slices of bread, nominally ‘brown’ bread, wrapped in clear plastic, with a well-known bread company’s full colour branding printed on one side.

Across the train, every passenger eating breakfast will be getting these packets. For every two slices of bread consumed there will be one torn prophylactic of cellophane thrown on to a food tray, where it will join the detritus of hard plastic bottles and tubs, spent plastic sachets, more cellophane and foil. If you made a pile of all the packaging used by a passenger travelling from Delhi to Calcutta across a 17-hour journey you would get a small mountain of plastic ‘prasad’ per person. Now, imagine each small pile on a thali and a few hundred thalis of this prasad lined up on the platform next to the Rajdhani once it is emptied of passengers at Howrah. Let the train pull out and the next Rajdhani come in. Add the thalis that emerge from that. Imagine thirty rows of thalis at the end of every month, the platform now carpeted with discrete piles of junk. Imagine the same at Sealdah. Then imagine a similar parade at New Delhi railway station, and a similarly carpeted platform for each Rajdhani that comes into the capital. Add all the other long-distance trains and then the middle-distance Shatabdis and what have you that proudly serve packaged catering to passengers in the name of modernization and hygiene.

I have a memory, possibly a flawed one, of when the first packaging of this sort appeared on the Rajdhani (the train on which I’ve travelled most frequently). I think it was in the late 1980s and I was startled to see foil and plastic on the food trays. After dinner, standing in the vestibule next to the toilets, I asked the man clearing away the trays about this new-fangled packaging. “This is the railway minister, Madhavrao Scindia! He has brought it in! It’s great!” “But what do you do with all the plastic garbage?” I asked. “Oh, that.” The man grinned. “Come, I’ll show you.” He led me across the swaying carriage connector into the pantry car and opened an exit door. “It’s simple. This is what we do.” Tray by tray, he swept the junk into the undulating abyss of the night outside the door. “It’s great. Passengers get hot food so they are happy, and we don’t have to clean up much afterwards so we are happy.”

There have been several railways ministers since Scindia held the post. Much toxic plastic has been flung along the route of the Rajdhani in the last thirty-odd years, the non-biodegradable junk increasing volume as more and more items find themselves encased in branded packaging. It is highly likely that the means of garbage disposal have changed since those simpler times. However, if the land beside the rail tracks is being spared (and that’s a big if), the garbage landfills are receiving a much higher volume of this stuff than in the 1980s. No railways minister after Scindia has seen fit to try and reverse or change the catering policy. It seems to have occurred to no minister of any party, and no railways bureaucrat either, that this packaging waste is adding to the poisoning of our land. No one seems to have even considered alternatives to this hugely harmful packaging practice and certainly no contracted catering company seems to have given a flying foil packet about the environment.

Someone could reasonably ask why someone should be banging on about rubbish on trains when the whole country is in ecological freefall. Someone could also point out that since 1991 every private corporation selling consumer products, from soft drinks to shampoo to gutkha to chips and biscuits have flooded the country’s villages with cheap foil packaging without worrying for one heartbeat or one slipped synapse about what their ‘carpet-bombing’ is doing to the environment. Someone could ask where ideas of sanskar, swaraj, swadeshi or sanatan dharma go when we swallow the Western notion that increased GDP — at whatever lunatic cost to the quality of life of the average Indian — is the one goal that every political party must aim for, or when we blindly accept that the increased production and purchase of private motor vehicles is seen as a good and desirable indicator of the health of the economy even as our cities choke on exhaust fumes. Someone could ask, why worry so much about the small things when the big things are collapsing?

The obvious answer is that the big things are connected, by vein, sinew and nerve, to the small things. If, as we are told, there is not much time left for us to save the planet from an ecological apocalypse, then surely we have to do whatever we can from every direction and at every scale? Across the planet, from climate change deniers in America, to the decommissioning of nuclear plants in Germany to the huge strides made by Costa Rica (population about the same as south Calcutta) in using only renewable energy, the reaction to the crisis into which we have slid has been uneven. Delhi is, as I write, ten degrees hotter than Calcutta, but things have been put in motion by the local government that might yield medium-term benefits while we in Calcutta and Bengal continue to suffer. It’s huge automobile numbers aside, Delhi has good recycling, or what we call kabadi, while in Calcutta one can’t dispose of glass bottles for love or money; Mumbai and Maharashtra have banned plastic bags while here we still have shopkeepers urging us to take more and more plastic bags. The country is facing a huge water crisis, something that is unreal to most of this city — so far.

Recently one came across two separate statements in the news. One said that unless we do something on a war footing we humans have no longer than thirty years to survive. The other statement was a claim by a BJP politician that the party would rule India till 2050, about the same amount of time we have left as a species. One can’t help wondering if the two projections might not be connected. Perhaps we should take both the statements seriously without accepting either as a foregone conclusion. Whatever one’s political position, perhaps we should try and do what we can in the smallest ways in our daily life to at least ward off the end of our liveable environment?