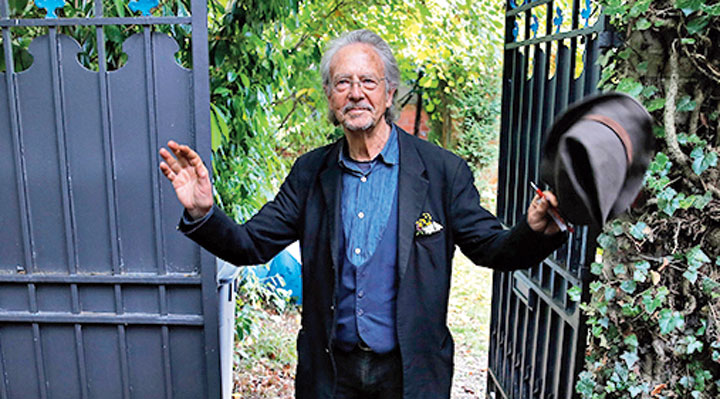 Peter Handke at his house in Chaville near Paris on October 10, 2019. For decades Handke has been immensely prolific — novels, plays, poetry, travelogues, essays, diaries, even film scripts… there is not a genre in which he did he not excel! Yet, his readership diminished and changed.
(AP)
Martin Kämpchen   |   Published 06.11.19, 08:14 PM

When the Austrian playwright, Elfriede Jelinek, was, to the surprise of the literary world, awarded the Nobel Prize in 2004, it seemed to seal the fate of the equally, if not more, prizeworthy writer, Peter Handke, from the same small alpine republic. This year, the Nobel Committee sprang another surprise by nominating Handke. The reaction was mixed. First, after promises to widen the horizon and consider writers globally, the choice was, once again, a European for both 2018 and 2019. Newspapers enumerated the many award-worthy writers from other continents. Second, Handke’s image is tainted. Of Serbian descent from his mother’s side, he took the side of the Serbs when Yugoslavia disintegrated after Josip B. Tito’s death. People who had lived peacefully as neighbours suddenly turned against each other. The Serbian militia under the leadership of Slobodan Miloševic butchered thousands of innocent civilians. Handke wrote in defence of the Serbian militants and their leader, not just once but repeatedly. When he accepted the Nobel Prize nomination at his home near Paris, he reiterated to journalists: I take nothing back.

Handke is 76 years old. He is of my generation. We grew up with him, as we did with Günter Grass and a few others. For long years, he has been a guidepost, a mentor, an inspiration. While Grass’s writing and his activism were deeply political, Handke looked inward with the same kind of intensity. Both writers, different and antagonistic as they have been, complemented each other. They both began writing with the Holocaust legacy pressing down on them. Grass chose to write on the Second World War using his experience in the Danzig of his childhood and youth. His response was the novel, The Tin Drum, and countless essays, speeches and interviews making Germans aware of their common guilt for the concentration camps and the Nazi terror.

Handke began by ‘re-inventing’ the German language; it had been sullied by the Nazi jargon which hid and banalized the violence and fear provoked by Nazis. Handke experimented with the language and by doing so, experimented with the way we see reality. He turned natural hierarchies upside down, made his figures struggle with ‘normal’, commonplace situations. Reality itself had to be reinvented.

Handke is Austrian, but in Germany we considered him as one of us. The same World War II legacy, the same language, the same need of rethinking and cleansing. From the beginning, his publisher was the mighty German, Suhrkamp Verlag, in Frankfurt, now in Berlin. I remember Handke giving a reading at the University of Saarbrücken where I spent my first semester. The auditorium was packed to capacity, he walked in — shy, looking boyish and immature. It was the winter of 1967-68, and Handke was at the onset of his literary fame. His age and experimental language gelled well with the rumblings of student unrest in German universities which would explode the next year. As Handke began to read, he appeared suddenly transformed. In staccato rhythm, he hit the audience with his poetic lines. He read with verve and assurance. Nothing boyish about him anymore.

Next I saw his famous early play, Publikumsbeschimpfung. Again a reversal of roles. The audience was not empowered to criticize the actors on stage, but they, the actors, did the job, berating, hollering, railing at the audience. A group of actors stood on the bare stage and flung foul words at us. It was a performance with the same kind of strong rhythm and playful assurance.

Soon a transformation came over Handke. His experimentation with words led him into the depth of the human condition. He became a secular pilgrim. Although born of a Catholic Christian mother, he was never seen as being pious in the conventional sense. He never seemed to be overtly guided by Christian values or traditions of thought or custom. Instead, he strove to discover the spiritual world in the revelations of nature, in the communication between people, in the superb sensitivity of his own mind. He shrank away from romantic feelings, from any spiritual exuberance. Instead, he needed to find the spirit in his almost clinically sober and precise descriptions. For me, it is a modern-day spirituality suited to Western cultures which had begun to withdraw from traditional Christianity.

For decades Handke has been immensely prolific — novels, plays, poetry, travelogues, essays, diaries, even film scripts… there is not a genre in which he did he not excel! Yet, his readership diminished and changed. Handke leads a hermitical life at the outskirts of Paris. His small but loyal readers believe, like him, in a contemplative, slow, nature-bound and aesthetically refined lifestyle. In the era of climate change, the fundamental metamorphosis that Handke has spearheaded could be a beacon-light. If there was not one hitch — that incomprehensible defence of the Serbian slaughter.