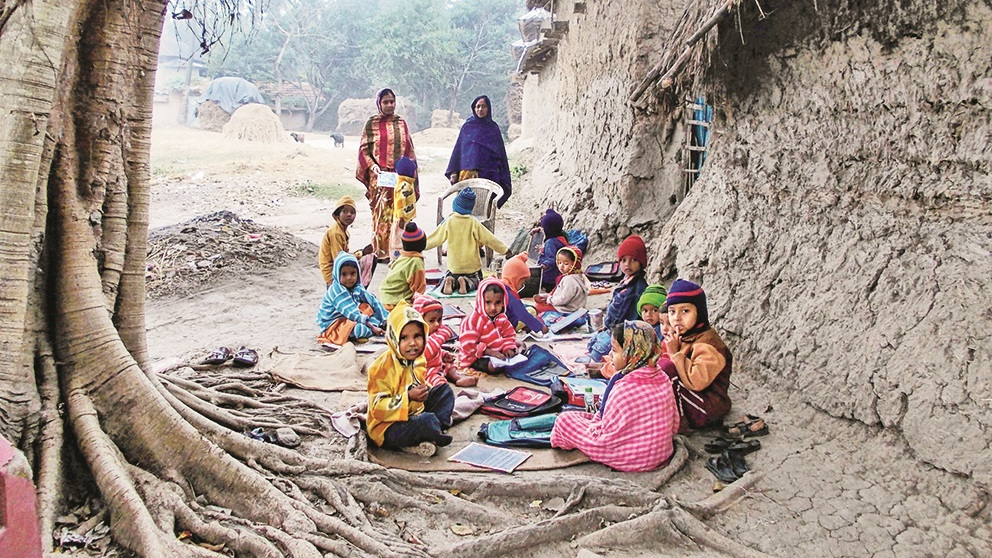 Last year, Rahim Shekh of Englishbazar, Malda, was hawking pineapples. Divya and Mounika picked cotton in a Telangana village. Chand of Saharanpur sold samosas by the roadside. A year earlier, they had all been at school.

Such stories cruelly authenticate the prime minister’s claim to “link education with employability and entrepreneurial capability” to build an Atmanirbhar Bharat. Certainly these children have learnt self-reliance — by dropping out of school. It is thus entirely logical that the school education budget should be reduced by Rs 5,000 crore this year.

The pandemic is driving more and more children out of school. Last year, the proportion of permanent drop-outs was estimated at 20 per cent — a slide back to 2004. The enrolment gap in primary schools had trebled. We can only guess the outcome of a second year of closures. Vulnerable groups and regions will lose out disproportionately. There will also be a serious learning deficit among those resuming school: countless children are waiting around learning nothing, and forgetting what they have learnt. Add to this the digital divide and its novel refinement — the digital coaching divide. Among the few service sectors to blossom during the pandemic is the online coaching industry. The Indian school system has always been bedevilled by the gulf between private schools for the affluent and State-run schools for the janata. We now have divisions within each category: in the first, between students taking parallel online courses and those not doing so; in the second, at bedrock level, between those with access to a digital device and those without.

The pandemic has added some daunting new challenges to the old ones. It is the worst of times to launch the new National Education Policy. Perhaps its most exciting innovation is to reinvent anganwadis as full-fledged pre-primary schools for all of India’s children aged three to six. This could indeed be a game-changer, giving every child an opportunity only the affluent now enjoy. It calls for detailed pedagogic planning and heavy investment without impairing the crucial agenda of nutrition and healthcare.

The latter function is more crucial than ever. Between 2014 and 2020, India’s position in the Global Hunger Index plummeted from 55th to 94th, below Nepal, Bangladesh and Pakistan. The proportion of malnourished children in anganwadis rose from 15 per cent in 2015 to 25 per cent in 2017. Unsurprisingly, stunting, wasting and low weight increased between 2015 and 2020 in 14 of the 17 states covered as yet by the last National Family Health Survey. The pandemic has exacerbated the problem. South Asia is one of two zones (the other being sub-Saharan Africa) with the greatest post-Covid threat of aggravated hunger.

Yet the Saksham scheme, covering anganwadis and three other programmes, has suffered an overall budget cut of nearly   Rs 4,500 crore. Clearly, anganwadi reform will proceed sporadically, if at all. The gap between privileged and underprivileged children will widen incrementally.

Beneath its pious precepts and feel-good rhetoric, the NEP is intrinsically fissiparous. It consigns some children to open schooling, a fallback for dropouts and child labourers. This — astonishingly — is said to lay “special emphasis on Socio-Economically Disadvantaged Groups”. In ashramshalas for tribal children, as in “all formats of alternative schooling” (invariably for disadvantaged children), reforms will come “in a phased manner” — that is, without urgency, where the need for urgency is greatest. This provision, absent in the draft, was added by bureaucrats in the drastically truncated final document.

Generally “to make it easier... to build schools”, there will be “less emphasis on input and greater emphasis on output potential concerning desired learning outcomes”. Exploiting this escape clause, the State can skimp on funds at its whim, especially with marginal groups. Through these few unobtrusive sentences, the report releases the State from its duty under the Right to Education Act to “provide infrastructure including school building, teaching staff and learning equipment”; moreover, to ensure that children from a “weaker section [or] disadvantaged group are not discriminated against”.

Anganwadis fall under the women and child development ministry, ashramshalas under tribal affairs. The new Early Childhood Care and Education centres, when they materialize, will be run jointly by four ministries. One shudders to think of the bureaucratic deadlocks and turf battles. Above all, who will staff these centres, and on what terms? It is proposed to retrain grossly underpaid anganwadi workers (formally volunteers) as teachers “through digital/distance mode” with “minimal disruption to their current work”, which comprises 28 functions under five heads with no fixed hours. One may reasonably ask whether this can do justice to the children in their charge.

The architects of the NEP seem unaware that the problem exists. But predictably, they propose to dilute the workforce with new categories of ‘volunteers’. There is also a hair-raising proposal for ‘peer tutoring’ of one 6-to-8-year-old child by another in foundational skills like literacy and numeracy. The NEP’s vision might turn into a slow nightmare where India’s most vulnerable children lose out even more than now on both education and general well-being.

Such short-changing might subvert another innovation, a new stress on vocational education. From middle school onward, all students will learn at least one vocation, “emphasizing the dignity of labour”: a laudable agenda, but we may recall the fate of its predecessor, the ‘work education’ programme. In urban, upper-class schools, this has become a farce that, if anything, further alienates privileged children from labour and its dignity.

The actual result might be to underscore the subaltern status of vocational education. As it is, a student’s curricular journey overwhelmingly follows his/her class identity and economic standing. If the vocational path now opens up in middle school, children from labouring and artisanal backgrounds would be steered even more in that direction, irrespective of ability and aptitude. A mason’s son would still be a mason by default, a domestic worker’s daughter another such worker, instead of pursuing more adventurous ‘vocations’ as doctor, lawyer or research scientist. No flight of fantasy can conceive the opposite situation where a doctor’s daughter trains as a mason, or a lawyer’s son as a cleaner.

The new education order, just like the old, might strangle at birth most of the talent to enrich our knowledge economy, reinforcing the dominance of certain classes, castes and communities, reinventing varnashram in a twenty-first-century avatar. Almost without thought, we are hurtling towards a future where we will have squandered our demographic dividend by neglecting the proper educational groundwork at the right time. There will be dire consequences for the economy and, no less, for social harmony and well-being. We were blind to the latent fury of the pandemic. Let us work to avoid this still greater disaster.