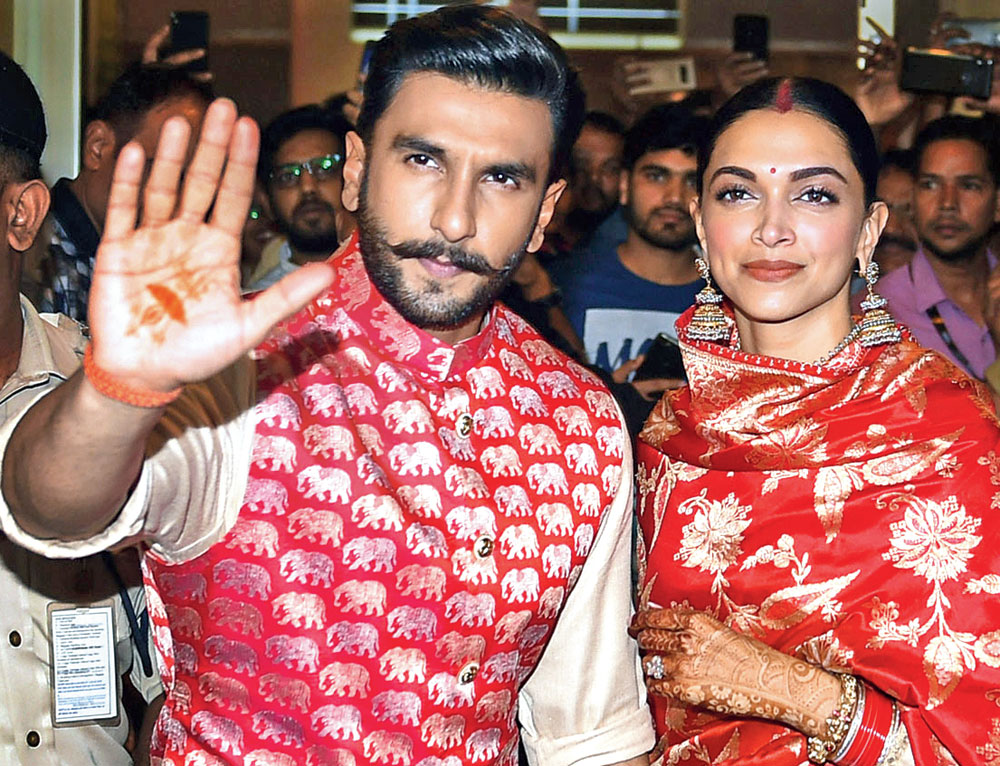 Deepika Padukone and Ranveer Singh, who recently tied knot in a private ceremony at Lake Como in Italy, on their arrival in Mumbai on November 18
PTI
The Telegraph   |   Published 26.11.18, 12:37 PM

Sir — The news of the demise of Alyque Padamsee has saddened the nation. He was a multi-talented personality, who made rich contributions to the fields of theatre and advertisement. Padamsee was also a social activist. He created advertisements that resonated with the public. His portrayal of M.A. Jinnah in Richard Attenborough’s Oscar-winning film, Gandhi, is a testimony to his prowess as an actor. Padamsee won the Padma Shri in the year 2000.

Sir — Alyque Padamsee, ad guru and theatre personality, died at the age of 90 in Mumbai. He was born in 1928 in a traditional Khoja Muslim family from the Kutch region of Gujarat. He was the founder of Lintas India, one of the top advertising agencies in the country. Further, he was the only Indian to get nominated in the International Clio Hall of Fame, which is regarded as the Oscars of advertising.

Sir — With the death of Alyque Padamsee, India has lost a titan in the world of advertising. Today, the spot in Kodaikanal where he filmed the 1975 television commercial for the Liril soap brand is popularly known as the Liril Falls. It proves what an impact the TVC has had on viewers.

Sir — The Indian media cannot seem to stop raving about the marriage of Bollywood actors, Deepika Padukone and Ranveer Singh. In mid-November, the couple tied the knot in a private ceremony in Italy. Even before the marriage was solemnized, there was fervent speculation on what the duo would wear on their wedding day. One can still understand if the Twitterati show unbridled curiosity in the personal lives of celebrities, but it is improper for media houses to behave like star-struck fans. There are far more important issues that can be raised.

Sir — The government of Maharashtra has decided to extend the benefits of reservation to the Maratha community (“More of it”, Nov 20). This decision comes after the Marathas took out 57 rallies seeking quotas in the last two years. The Marathas will be provided reservation under the special backward class category.

However, the decision of the Devendra Fadnavis-led government is an ill-thought out one. Community-based reservations should be abolished. Instead, quotas could be provided to those belonging to the economically weaker sections of the society. The way things are moving at the moment, a time will soon come when every community will demand reservation.

Sir — Quotas have become a bone of contention in the country. Members of several unreserved castes are claiming that they should also be included in the ambit of reservation.

In the earlier days, there were plenty of jobs in the public sector. But following liberalization and privatization in the 1990s, quotas have lost much of their significance. The agitations demanding reservations are, therefore, a bit confounding. Instead of increasing quotas, the authorities would do well to train more youngsters and make them job ready.

Sir — The Supreme Court has put a 50 per cent ceiling on reservation. If the recent decision of the Maharashtra government gets passed in the assembly, then the quantum of reservation in the western state would increase to 68 per cent.

Most dispensations use quotas as a tool of vote-bank politics. It is in the country’s interest to abolish reservations of all kinds.

Sir — The editorial, “Lost song” (Nov 19), has correctly excoriated right-wing trolls for reportedly threatening the organizers of a concert in New Delhi that was to feature the Carnatic vocalist, T.M. Krishna. The Hindutva brigade has, once again, betrayed its contempt for those who do not conform to its narrow and divisive agenda. What is equally deplorable is the tame capitulation of one of the organizers, the Airports Authority of India, to the diktats of the troll army.

In such a scenario, the bold stand taken by the musician needs to be appreciated. In spite of the threats, Krishna has not compromised on his music. One must also laud the move of the Delhi chief minister, Arvind Kejriwal, who organized an alternative concert for Krishna in the capital. The tendency to run roughshod over creative activities in the name of religion must be thwarted at all costs.

Sir — Following an online backlash, the AAI postponed a concert involving T.M. Krishna. But eventually, with the help of the Delhi government, Krishna performed in another concert in the capital. This development brings to mind what Raja Ram Mohan Roy had said aeons ago: “enemies to liberty and friends of despotism have never been, and never will be, ultimately successful.”