The media becomes the news in US presidential polls 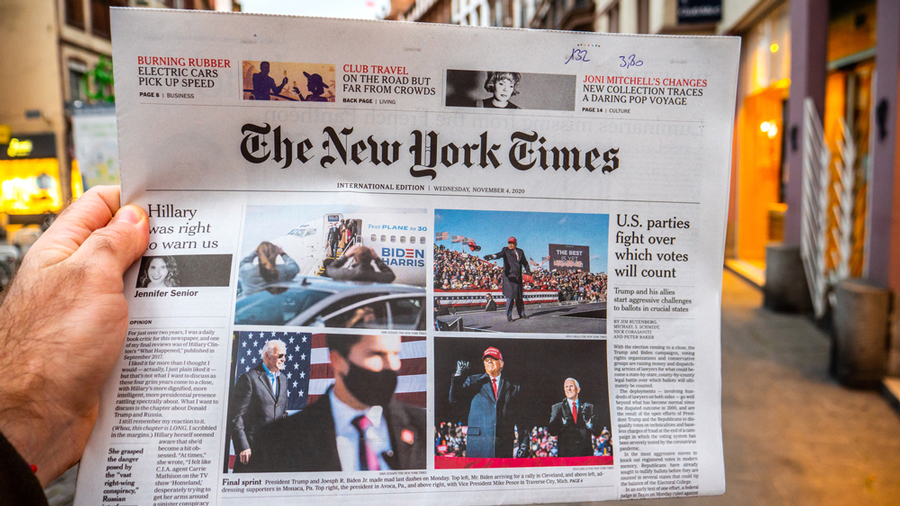 The United States holds what has been described as a locally-run national election, fifty one separate elections in the states and Washington DC
Shutterstock
Sevanti Ninan   |   Published 23.11.20, 01:32 AM

In the US the elections are as much about the media as they are about politics.  The American media’s conduct becomes a story every four years when the country elects a president, whereas  the media as an institution is never considered central to  determining election outcomes here in India, in quite the same way.

The reasons have to do with how the two countries run their elections, the extent to which the media in each country becomes the news during the polling process, and the ideological leaning of  major mainstream media outlets which are more pronounced in the US than is the case here.

The United States holds what has been described as a locally-run national election, fifty one separate elections in the states and Washington DC. That became evident to the rest of the world this time as it watched the fate of the two presidential candidates being decided state by state, at very different speeds of vote counting.  There is no central election commission such as ours, conducting the election and declaring seat counts in states across  the country.

When the process is disaggregated,  the role of the media  in calling the election in each state (declaring the winner) and counting the totals becomes far more central, and has been so since 1848 when the Associated Press declared Zachary Taylor the president.  The New York Times  for instance published a statement this year detailing the process it would employ in calling this election.  But it is the TV networks that first break the news, state by state and then declare the president elect.

Which is why there was so much focus on Fox News, still controlled by Rupert Murdoch after his company’s sale of stake  to Disney, and run by a high-powered Republican lawyer.   Fox News was to Donald Trump what Zee News is to Narendra Modi. A committed network, to put it mildly. In a closely-fought election there was expected to be pressure on Fox to call the election for the Republican candidate.

Fox News was a cheerleader for the  Trump Presidency for pretty much  its entire tenure.  And when it decided to suddenly turn professional and let him down, it became one of the big stories of these elections.  Apart from giving Donald Trump the idea for he could do next: launch a competitor to Fox!

As for the media writing about its own conduct in an election year, there is no self imposed bar in the profession of the kind seen in India until digital media came along.  It is a beat, and there was lively reporting  ahead of election day on how the “decision desk” at Fox was being set up. The New York Times profiled  the man in charge, Arnon Mishkin,  a registered Democrat who had to ensure that the network’s inherent bias would not distort its reporting of the outcomes in each state.  And that Fox News would not succumb to pressure from the White House to call the election for Trump before all the votes were counted.

In the event, the opposite happened, with the network incurring the Trump campaign’s wrath by calling Arizona, a key battleground state,  for Joe Biden with just 73 per cent of the votes counted, and declining White House  calls to retract.  A week later a Fox News anchor added insult to injury by cutting away from a press conference by the White House press secretary as she accused the Democrats of voter fraud and illegal voting.  The anchor said he could not continue showing that until she brought evidence.

The media became the story in a big way because what it did mattered even more during a narrow contest conducted in the midst of a pandemic. And because of a healthy tradition of self-criticism that stretches to   journalists critiquing  their own outlets for bias.

News network NBC was roundly criticized including by its own staff and talent when it scheduled a town hall with President Trump to clash with an earlier scheduled town hall with candidate Biden on rival network ABC.  Same day, same time.  This was right after  the President withdrew from the second debate.  NBC was accused of either trying to grab ratings or curry favour with the Republicans.

And at  the New York Times it has been a year of taking frequent criticism from its staff. A newsroom feedback channel was created in June after the paper carried an op-ed by a Republican senator arguing for calling out the military to quell the unrest following the killing of George Floyd. Many staffers used the feedback channel to denounce the decision to carry the op-ed. Others have asked why the opinion pages could not carry opinions that go against the grain for those who work at the paper. In July an opinion page editor resigned, calling out the paper’s excessive liberal bias, and noting that the 2016 election outcome should have made the NYT realize that it was out of touch with many Americans.

Books have been written about how media bias shapes election narratives in the US. When broadcast journalist Bernard Goldberg published his 2009 critique of how hard the liberal press worked to get Barack Obama elected in 2008,  he called it “A Slobbering Love Affair.”  And described how the liberal press made it their mission to give America its first Black president.

The third reason why the media becomes a player in every election is because news source choices reflect political polarisation.  A Pew Research Center study found that when it comes to getting news about politics and government, liberals and conservatives inhabit different worlds.  People prefer an echo chamber that tells them what they want to hear.  Consistent liberals went to CNN, MSNBC, NPR and NYT. Consistent conservatives clustered around Fox News.

With Fox News having let down the President--as many viewers saw it--they are now turning to another conservative channel called Newsmax television which gives them the kind of news they tune it for, according to Goldberg  writing in thehill.com. Until late last week this channel had still not called Biden the winner of the election.  And it   saw a ratings boost of 183 percent around the election as President Trump encouraged viewers to defect from Fox News.