The Left now faces the prospect of extinction

'Survival of the fittest’ applies to the political sphere too, and in order to survive, the Left must reinvent itself 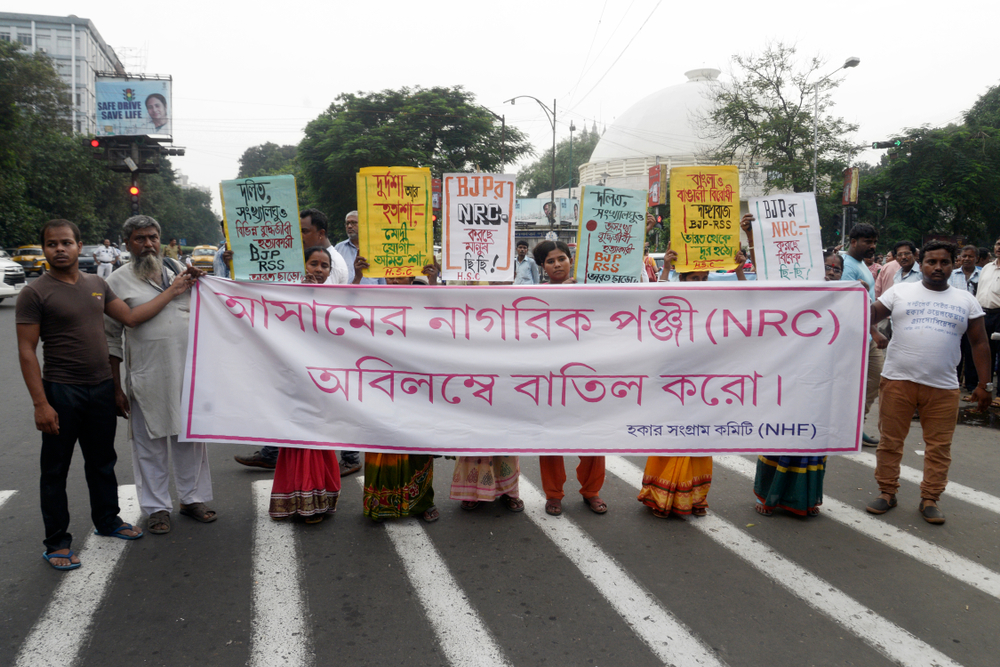 Protest against the National Register of Citizens in Calcutta in August 2018. The Left should take a strong stand on this issue.
(Shutterstock)
The Telegraph   |   Published 17.07.19, 11:38 AM

Look to the left

Sir — In the article, “Path to resurrection” (July 10), Prabhat Patnaik raises some pertinent points in the context of the current political situation in India. At present, secularism in India is under serious threat as some politicians are trying to divide the country along religious lines for electoral gains. If such attempts are not thwarted immediately, the social fabric of the country will be damaged severely.

The National Register of Citizens is being implemented in just one state, and about 40 lakh people have already been excluded from its draft. Their future is now in jeopardy. This is perhaps the first time since Partition that India is facing such a great challenge regarding citizenship. The Left should take a strong stand on this matter. It is high time that all leftist parties stand united and take up these burning issues with the government until they are resolved. The task, of course, is not an easy one, but it certainly cannot be neglected.

Sir — Prabhat Patnaik’s article on communism in India and its decline is thought-provoking. During the heyday of communism globally, with the Soviet Union and Mao Zedong’s China, Ho Chi Minh’s Vietnam, the Communist Bloc in eastern Europe and iconic leaders like Che Guevara in Latin America and Fidel Castro in Cuba reigning supreme, every communist believed that the ideology he stood for was eternal and invincible. People seemed convinced that communism could reshape their lives.

But fate had something else in store. Flawed organization and implementation led to the downfall of communist giants, and gradually the global Left embraced parliamentary democracy. Communist values, once so revered, began to be eroded by unreasonable compromise, greed for institutional power, lack of intra-party democracy and mistaken social judgment.

In India, the Left’s defeat in Tripura last year was just as miserable as the one in West Bengal in 2011. Kerala experiences a cyclical shift of power; so the eulogy for the communists is yet to be written there. Communism now seems constrained within social media. But such activism can hardly solve any real political problem.

The principle of ‘survival of the fittest’ applies to the political sphere as well. In order to recover its lost position, the Left must reinvent itself. Even if political parties disintegrate, communism should survive.

Sir — Prabhat Patnaik’s article admits the decline of the Left from the electoral primacy that it enjoyed even a decade ago. The Left has long been dependent on the Congress for alliances in electoral politics and, in recent times, has been too complacent about inducting new leaders or injecting any new thought into its strategies in order to improve its overall standing in the country. Thus, its grassroots support base gradually withered away.

The Communist Party of India (Marxist) ruled for a long time in West Bengal with the support of the Congress at the Centre. This proved to be detrimental to the Congress, as its organization in West Bengal weakened. Ironically, the fall of the Congress paved the way further for the Left, especially under the leadership of Jyoti Basu, to dominate the electoral space in West Bengal for decades. With time, this made the Left more authoritarian in nature. The moment the former general secretary of the CPI(M), Prakash Karat, withdrew the Left’s support from Manmohan Singh’s United Progressive Alliance government at the Centre in 2008, the fall of the Left in India became imminent.

Unfortunately, even this did not prod the Left into launching new strategic thinking to cover its base. It now faces the prospect of extinction even from its stronghold in Kerala, as is evident from the electoral outcome of the general elections earlier this year. In West Bengal, not a single candidate of the Left got a Lok Sabha seat this time. Tripura, too, has gone the West Bengal way. As such, it is difficult to imagine a revival of the Left, lost as it is in a state of constant denial of reality.

Sir — The attention that Donald Trump generally gets has now been extended to his wife. An artist has carved a life-size statue of Melania Trump out of a living tree in her hometown in Slovenia. However, its resemblance to the First Lady of the United States of America is rather debatable — it has widely been likened to a scarecrow. The world of art has often tried to capture the essence of the times — the Cubists presented the fragmented nature of reality, the Futurists the overpowering advance of technology. Perhaps this sculpture simply reflects the absurdity that now dominates the world.