The joy of cleaning

The recent eight-part Netflix series, Tidying Up with Marie Kondo, demonstrates just how much cleaning can transform lives 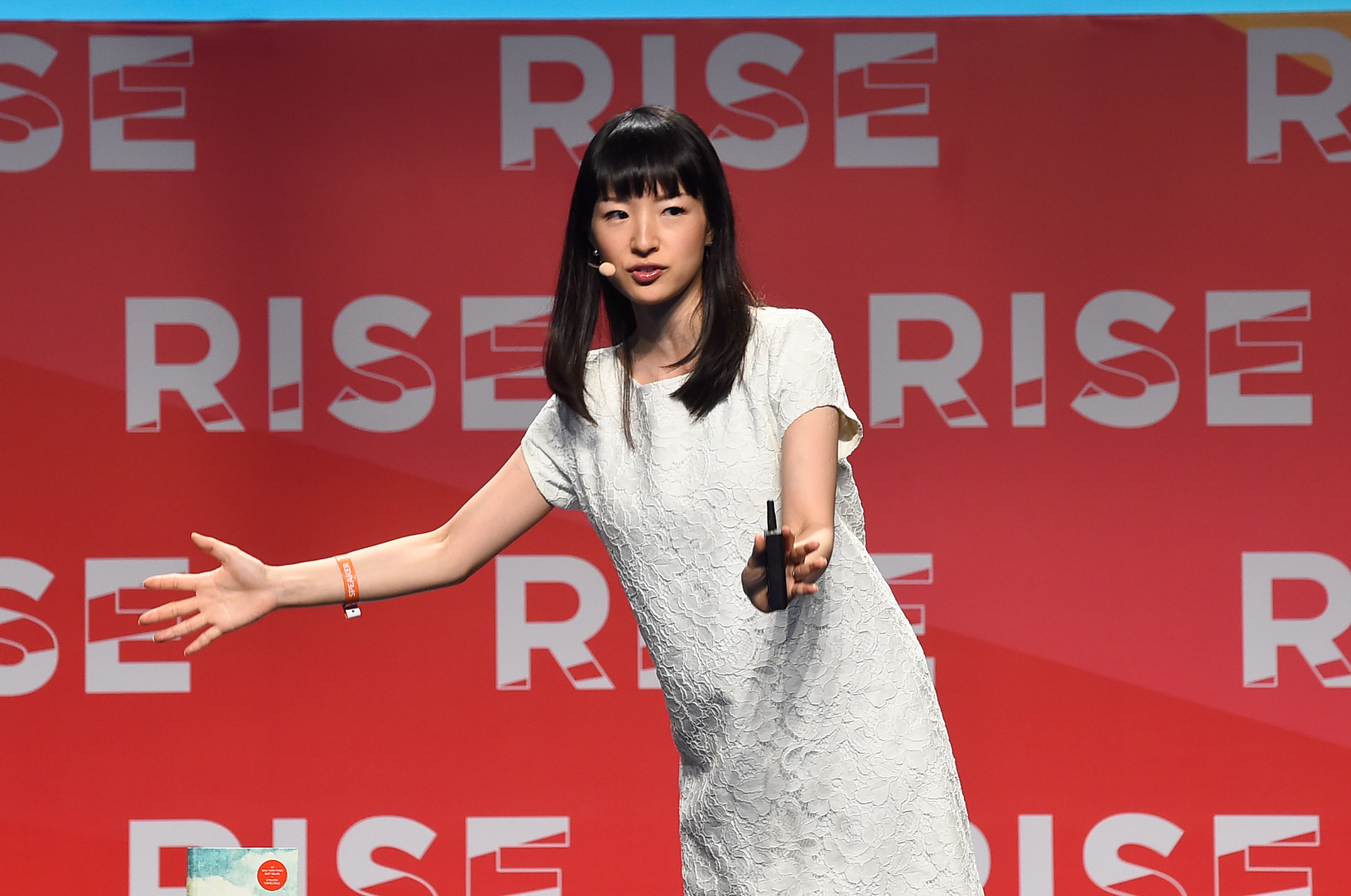 The Netflix series follows Marie Kondo as she advises different families on how to declutter and organize their living spaces.
Image: Wikimedia Commons
Suhashini Sarkar   |   Published 02.03.19, 08:19 AM

When you think about what sparks joy in your life you may not think of tidying up junk. However, joy is the foundation of the philosophy of the Japanese organizing consultant and author, Marie Kondo, for sorting out messes. The recent eight-part Netflix series, Tidying Up with Marie Kondo, demonstrates just how much cleaning can transform lives. The show has taken the United States of America by storm.

The series follows Kondo as she advises different families on how to declutter and organize their living spaces. Her trademarked technique, the KonMari Method, centres around the items that make us the happiest or, in her phrase, “spark joy”. The method encourages cleaning by category rather than location, starting with clothes, then books, papers, miscellaneous items, and finally, sentimental items. It follows the Japanese Shinto belief system and Zen philosophy by treating objects as if they are living beings. The show has started a national conversation about overbuying and hoarding. Many viewers, my family included, were inspired to open junk drawers and toy chests while watching the show and start dumping items. Shoe boxes were repurposed as drawer organizers, and T-shirts were folded in the crisp KonMari style.

Kondo started out as an organizing consultant while at university in Tokyo. Her 2011 book The Life-Changing Magic of Tidying Up, put her on the map. Today, more than 11 million copies of her three books have been sold worldwide. Recently, piles of toys, outfits and accessories belonging to pets have been tackled as well. The heart-warming results are cropping up on social media under #KonMariPets.

The Academy Awards this year tried to shake things up by eliminating the popular movie category, announcing winners for less popular categories during the commercial breaks and doing without a host after a long, controversial search for one. This year’s Oscars included popular nominees such as Black Panther, A Star Is Born and Bohemian Rhapsody and ended in a Best Picture victory for Green Book. It had an audience of 29.6 million, up 12 per cent from last year. This was the first upswing since the 2014 show, which was hosted by Ellen DeGeneres. In other words, the Oscars remain the most watched non-sporting event on television.

Many took notice of the diversity in nominees and winners this time, a few years after the #OscarsSoWhite controversy. Movies like Black Panther and Crazy Rich Asians have paved the way for more inclusion in the industry. The number of women of colour who won for production and behind-the-scenes work tripled.

Rami Malek is the first person of Arab heritage to win Best Actor. Regina King won best supporting actress for If Beale Street Could Talk and Mahershala Ali was chosen as best supporting actor for Green Book. Three out of the four actor/actress awards went to people of colour. Rayka Zehtabchi and Melissa Berton won Best Documentary Short Subject for Period. End of Sentence., a movie about the stigma attached to menstruation.

Mardi Gras, also known as Fat Tuesday, kicked off in various locales across the globe, although the heart of the celebrations belongs to New Orleans. The celebrations typically start in January, but most visitors arrived on March 1 and will stay through Ash Wednesday (March 6). The most popular events culminate with the end of Carnival on March 5.

Each year, between early January and Mardi Gras, about 75 parades loop through Orleans. The celebrations are economically and culturally significant. In 2014, researchers estimated that the festivities generated over $164 million in direct economic impact for the city, and had an indirect impact that’s far greater. All day, city folk and tourists crowd the streets, watching parade members in glittery garb walk through, some accompanied by colourful floats. Parade members often toss various items to the onlookers, the most common being garlands of beads.

Last year, 3,348 riders were part of the all-women super krewe, the Mystic Krewe of Nyx. The signature throws for Nyx is purses. Other throws will include fanny packs, purse medallion beads, socks, hula hoops and hair scrunchies, all in the krewe’s signature pink and black.

In a few weeks the Chicago river will be dyed green for St Patrick’s day. Now there is another reason for the river to be green — environmentally. The city just unveiled its plan to install an eco-park, called the Wild Mile Chicago, along a section of the river between Chicago and North Avenues on the east side of Goose Island. The suggested design, originally proposed as a part of the city’s 2017 North Branch Framework Plan, would create a series of floating platforms along the edge of the waterway. The park will act as a habitat for plants and wildlife and also allow residents to enjoy nature. The river may not be the best suited to support a habitat but this project will change that. The water flowing through the eco-park will be absorbed by the roots of plants, naturally cleaning it by filtering waste.

In 2017, a team called Urban Rivers — a group of ecologists and entrepreneurs looking to convert ugly city rivers into wildlife havens — worked independently to install about 1,500 square feet of greenery on the river. Now the same group is teaming up with the city to extend this vision. This would be the world’s first floating eco park.

You can get a dollar slice of pizza in New York City, but now an app called Ritual can help you get a full meal for a dollar in what is called the Ritual Food Festival. More than 100 restaurants in New York participate in this service, and for two weeks, well-known spots in the Financial District are offering select items for just $1. You can use the service multiple times. You just need to download the app. However, the deal is valid until March 8.