It is time for new politics of the earth, and the sense of planetary ecology that democracy desperately needs 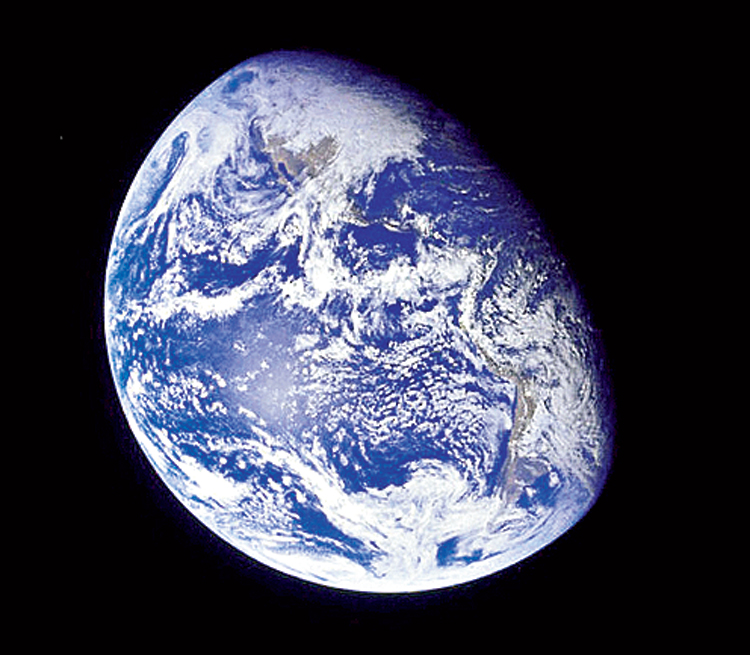 View of Earth as photographed by the Apollo 8 astronauts during their lunar orbit mission. The images from Apollo 8 created a new iconography, and gave man a sense of a new whole, a new ontology of the earth and its becoming, and a sense of man’s being on it.
(Wikimedia Commons)
Shiv Visvanathan   |   Published 19.09.19, 07:54 PM

Words create a separate magic, a penumbra of meaning that evokes memories. The word, serendipity, always fascinated me. It represented a stroke of luck, but it was luck that accompanied those who knew what to look for. It was part discovery, part good fortune, where you find what you are looking for because your unconscious is already searching for it.

The word, Anthropocene, evokes that sense of serendipity. Paul J. Crutzen, the Danish scientist and climate change specialist who coined the word, was objecting to the facile use of the word, Holocene. The Holocene was an era where man fitted comfortably and amiably into the universe. But Crutzen felt such an epoch was over, that humanity was disrupting the earth. He stumbled on the term in a conference several decades ago, and it found an immediate resonance with the audience. A word which Crutzen literally stammered out found a confidence, an immediacy that surprised its inventor.

There was, however, an irony to it. It was not a textbook concept with a clear-cut definition, a clarity of boundaries. Even as it was christened, it became a site for contestations. The word was seen as hegemonic and manipulative, literally a ploy of US policy to make India and China share the responsibility and the burden of climate change. As the folklore goes, one of America’s nightmares was a consumer world where every Chinese had a frigidaire. The third world retaliated by reading the Anthropocene as a Western ploy, confusing the West with the earth. It conflated the history of the West with earth history. Even the dating of the Anthropocene was a Western preoccupation, where the Anthropocene emerges either around the Columbian discoveries, or around the nuclear age. Yet the third world has to confront the fact that it is a trustee of the earth and is responsible for it.

In a way, this idea is evoked in the dialectic between swadeshi and swaraj. For M.K. Gandhi, the swadeshi was local, vernacular, while swaraj evoked a sense of the planetary. The two concepts tied microcosm and macrocosm together, the way a dew drop was linked to an ocean, or a neighbourhood to the cosmos.

It demanded a connectivity of thought, a planetary mindset that history lacked. History even now is an ethnocentric mindset, which was anthropocentric. It was such an attitude that urged the biologist, Lynn Margulis, to claim that every time historians talked of the role of man, she was tempted to establish a trade union to emphasize the role of bacteria in history.

The very core of man’s relation to the earth becomes central to the Anthropocene. Many writers have called it another Copernican Revolution. In a strange way, all the great scientific revolutions challenged the centrality of man. The Copernican Revolution showed that earth was not the centre of the universe, Darwin challenged the centrality of man as a species while Freud suggested man was not as rational as he thought, and Marx showed that economic man had little sense of the irrationalities of capitalism. The Anthropocene creates a more paradoxical reading. It first christened a whole geological epoch after man, showing that man’s invasiveness of the earth was truly epochal. Yet it adds that the sentimentality that the earth needs man is unnecessary. The earth can do without man. What man needs to do is to confront his rapacity towards the earth. A psychoanalysis of man’s relation to the earth is central to the narratives of the Anthropocene.

More importantly, man has to work out a less impoverished understanding of time. The idea of linear time, the sense of historical time, adds little to understanding the earth. Cyclical and cosmic time have to be woven into man’s understanding of the earth. Time gives a sense of modesty to man, especially when he realizes that bacteria have lived without him for a few hundred billion years. In fact, Margulis has shown how bacteria are more important for the earth’s evolution than man. But equally, man has to understand the responsibility for the future, even if the future does not belong entirely to him. One senses this in the judgment of the great Sri Lankan judge at the Hague Tribunal.When the Tahitians challenged the French nuclear testing in the Pacific, Justice C.G. Weeramantry ruled on their behalf by arguing that nuclear testing violated the rights of future generations.

While the word, Anthropocene, waxes bureaucratic, another term evokes these possibilities more eloquently. James Lovelock’s idea of Gaia posits an earth, which is a self-regulatory system. Lovelock’s idea breaks the apartheid dualism of biology and geology by showing organisms and the environment are not two separate domains. To argue that the organism adapts to the environment is argument for a weak science because organism and environment constitute an interactive system demanding a holism distant from the reductionism of the sciences so far. Interestingly, Lovelock’s theory goes back to James Hutton’s biological theory that the earth was a circulatory system which had to be understood physiologically. The separation between geology and biology as specialized sciences destroyed the possibility of such a view.

The collaboration between Lynn Margulis and James Lovelock was critical to this understanding. Margulis added to Lovelock’s systemic sense of the earth as a self-sustaining system, the idea of symbiosis, that organisms not only behave reciprocally but merge to create a new species. Man, rather than being individual, has to be seen as a composite of such processes. His egotism has to be curbed by his sensing the crucial role of bacteria in maintaining his gut.

The word, Gaia, as an earth goddess caught the imagination of ordinary people. At a Gaia conference, when scientists sought a more technical nomenclature for Gaia, the ecologist, Jonathon Porritt, objected, arguing that Gaia created a more inclusive sense of the earth, creating a metaphor and a language that ordinary people could relate to. The christening of Gaia itself makes for an interesting story. Lovelock was going for a walk with his novelist neighbour, William Golding, the author of the Lord of the Flies. Golding had a tremendous sense of science and language and he told Lovelock a long-winded gobbledygook would not work. Gaia struck a mythological chord, which helped its resonance and popularity. Sadly, its very christening as a myth made many scientists hostile to the concept itself. In fact, for a long time, Gaia was needlessly condemned as bad science.

Yet it is odd that science shrugs off myth and folklore when it is immersed in them. Gaia, in a way, revives the language of natural history, the medieval ideas of anima mundi, the sense of the animistic earth. More immediately, the images of the earth from Apollo 8 created a new iconography, and gave man a sense of a new whole, a new ontology of the earth and its becoming, and a sense of man’s being on it. The picture was stunning, transformational, almost paradigmatic. It gave us a new sense of earth and science and man’s sense of earthly being.

The idea of the Anthropocene cannot be dismissed as a Western invention. It has to be domesticated and translated by the third world and infused with a different sense of civilization and cosmology. The Anthropocene is thus an invitation to rethink, a suggestion that promethean man discover the need for prudence and modesty. This new politics of the earth may give a sense of planetary ecology that democracy desperately needs. When ecolacy and democracy combine, a new way of thinking and living might emerge, a sense of life and lifestyle that mankind can celebrate going beyond the current idiocies of the technocracies of consumption.

Voices on the margins in the era of climate change

Consequences of human impact on our environment