The festive season could worsen the Covid crisis 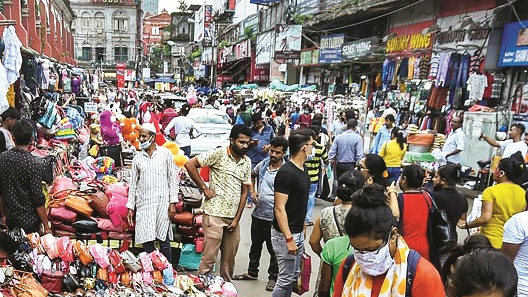 Last Thursday, October 8, large parts of Calcutta were brought to a halt in the wake of a planned march on Nabanna, the headquarters of the West Bengal government, by the state Bharatiya Janata Party. Both the bridges across the river were closed to traffic and many of the arterial roads into the city were blocked by the police to prevent the protesters from reaching their meeting points. The police arrangements were stringent enough to prevent the protesters from reaching Nabanna, but there were lathi-charges and use of water cannons at different points.

The politics behind the demonstration and the charges of disproportionate use of force, not to mention the insensitivity shown towards a Sikh security guard of a local leader, is not my principal concern. A larger issue that emerged from the protest marches and their aftermath centred on public and political behaviour during a pandemic.

The issue is relevant because the state government fell back on the Central government’s directive stipulating a ceiling of 100 people for any gathering to refuse permission to the protests. The state administration claimed that some 25,000 people had gathered in various parts of Calcutta and Howrah, and that this was unacceptable at a time when the Covid-19 threat hasn’t receded. In its view, last Thursday’s gathering was a health hazard.

Strictly speaking, the state administration is right. Although most of the people that participated in the rally wore masks, no social distancing was really possible in the melee. A rule, however, exists for all. The local BJP was right when it claimed that the state government is woefully selective in enforcing the rules governing public life during the pandemic. For example, the chief minister, Mamata Banerjee, led a medium-sized march protesting against the horrible rape in Hathras, Uttar Pradesh, through Chowringhee on October 3. Subsequently, she has been drawing crowds as she goes about inaugurating different Durga Pujas — all blessed with state government subsidies — in Calcutta and outside. At the same time, various local demonstrations by BJP workers on October 5 against the mismanagement and misuse of relief for the victims of the Amphan storm were forcibly broken up by the police with more force than was strictly necessary. Yet, the same police used discretion when dealing with angry BJP supporters accompanying the body of the murdered Manish Shukla through the streets of central Calcutta.

The use of discretion and good sense are imperative in the application of extraordinary rules that in many ways curtail civil liberties. In the past fortnight, as the festive season gathers momentum, the markets of Calcutta are bustling with large numbers of people — many unconcerned with either masks or social distancing — who are completely unmindful of the rules governing gatherings. In theory, the police have a duty to intervene, if only to spread out people. However, any intervention by the authorities in such situations would be unacceptable to the general population and make the position of any elected government — regardless of political complexion — untenable. The authorities, for example, have found it impossible to enforce any limits on the number of passengers in local buses. The sheer scale of demand makes social distancing an impossible goal. On top of that, there is the penchant in Bengal of frequenting the bazaars in the mornings and evenings, if not for purchasing daily necessities then for social interactions. For many people, especially those living a cramped existence in urban areas, a daily trip to the bazaar offers a respite from the drudgery of existence. It is as much a part of social life as the adda.

For any administration — and not least one that faces a difficult election about six months later — the task of managing a slow return to a semblance of normalcy amid a pandemic that refuses to abate is daunting. The 21-day national lockdown was envisaged as a sharp, short-term strategy of containment. Although this is still being tried out in different parts of Europe as a response to the ‘second wave’, there is a recognition that such extreme steps are economically damaging and even unsustainable. Increasingly, there is also evidence of public exasperation with lockdowns in general — as was witnessed during the random experiments of the Mamata Banerjee government. Moreover, there is a sharp contradiction between the ‘unlock’ approach of the Centre and the grim reality of the unrelenting spread of Covid-19 in many states. Either the country gets on with business as usual, albeit with the necessary precautions, or it retreats into a funk hole awaiting the miracle vaccine sometime in 2021 or later.

Fortunately, after a short experiment with total national closure — triggered, it may be added, by insufficient knowledge of the virus threat — India has tried to balance sensible precautions with the more pressing job of getting on with life. A viable balance has also been possible thanks to the rising confidence in medical cures for most Covid-19 cases. A person infected with the virus today has a far greater chance of getting cured in a fortnight than was the case last March when the pandemic first struck India. Even as scientists and policymakers argue among themselves on the strategies of prevention, the widespread panic that was in evidence six months ago has receded considerably. Alas, with greater faith in medicine, there is also a rising impatience with restrictions. This may explain why the past fortnight has witnessed a clamour for the speedy resumption of local train services that were suspended in March. The turnout in the Bihar assembly election will be an indication of the extent to which people have overcome their anxieties about Covid-19.

The mood of the nation is also certain to be tested during the festive season that culminates with Diwali. The Union health minister, Harsh Vardhan, has appealed to people to be exceptionally restrained in the coming months and, preferably, desist from public festivities. His wariness stems from the post-Onam spike in Covid-19 infections in Kerala, a pattern that could be emulated in northern and eastern India during the festive season in October and November. At the same time, Mamata Banerjee has proclaimed that the virus will be put under lockdown for the Durga Puja and that administrative arrangements have been made to ensure that people can go pandal-hopping after dusk. In short, she has calculated that having a good time must take precedence over calls to stay at home.

The chief minister’s political compulsions are understandable. Faced with imminent elections, political leaders are inclined to favour short-term solutions to complex problems. What has further complicated matters in West Bengal is Mamata Banerjee’s penchant for idiosyncratic measures that began with the needless suppression of Covid-19 deaths in March-April, was compounded by the bizarre pattern of lockdowns during the summer, and has culminated in her disavowal of restraint during Durga Puja.

In the coming weeks, eastern India in particular is going to be severely tested. The carnival atmosphere during the five days of Durga Puja could well become an occasion for the mass spread of the virus, a problem that is certain to be aggravated by the imperfections in the public health infrastructure. If the worst fears turn out to be real, it will be a huge setback for national efforts to come to grips with the pandemic. The festive season is also an occasion for prayer and this year, more than ever before, the goddess needs to hear the concerns of the devotees.