The farmers’ protest is a political opportunity for the Opposition 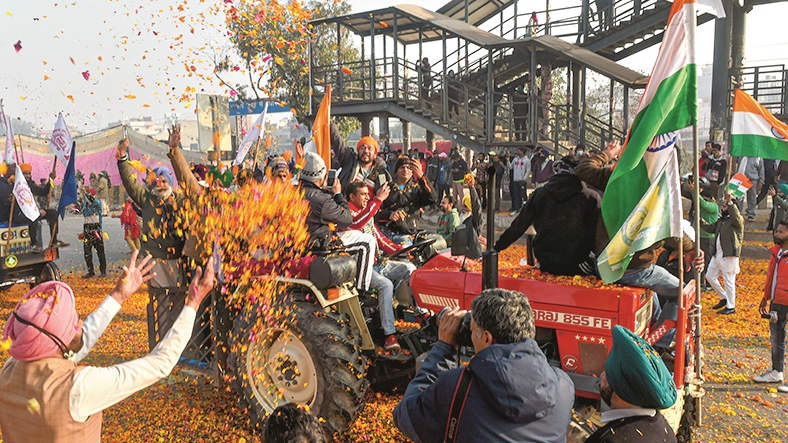 Flower petals being showered on farmers riding on their tractors after breaking the police barricades at Singhu border during the 'Kisan Gantantra Parade' on Republic Day, in New Delhi, Tuesday, Jan. 26, 2021.
PTI
Asim Ali   |   Published 20.02.21, 01:36 AM

The nearly three-month old farmers movement has managed to make a dent into the carefully maintained image of the ruling party. Yet whether that dent translates to something of electoral significance depends on the response of opposition political parties. If this moment leads to a political turning point, it would have less to do with what these protests meant for the BJP, and more about with what they did to the opposition. Put simply, this is a rare opportunity for revival provided to a largely comatose opposition.

The crucial state of Uttar Pradesh, known for its fierce political contestations, had in the last few years entered a phase of unusual political quiescence. That spell has now been broken with a string of kisan mahapanchayats put together by the SP and the RLD. Priyanka Gandhi has kicked off her own ‘Jai Jawan Jai Kisan Abhiyan’ in the state with a farmer rally at Saharanpur. Can these parties use these protests alone to inflict electoral damage on the BJP? Can these parties use the energy of these protests to rebuild their political capital? The answer to the first question is unclear, but the answer to the second question is yes- it is indeed a unique opportunity for opposition parties to replenish their depleted ideological and organisational resources.

The first question is unclear because there have been other farmer agitations in the last few years and farm distress has long beenprophesised as the Achilles Heel to the BJP dominance. Yet, the BJP substantially enhanced its vote share among both farmers and rural areas in 2019, compared to 2014. In fact, as a proportion, more farmers voted for the BJP than non-farmers. Only in the 2017 elections in Gujarat do we see concrete evidence of farmer distress playing a key role in hurting the BJP. In some other states, farm distress has been misattributed as a major reason for BJP’s reverses. In rural Haryana, for instance, it was Jat backlash over political marginalisation that dragged down the BJP, not wider rural distress. And in Madhya Pradesh, Rajasthan and Chhattisgarh, as the political scientist Neelanjan Sircar demonstrated,  the BJP’s victory strike rate dwindled as much in urban seats as in rural seats, indicating a wider disenchantment.

In fact, contrary to the narrative of BJP’s waning control over rural India, the larger political story since 2014 has been the steady expansion of the BJP, both in terms of organisation and support base, into the rural hinterland. As the scholar Diego Maiorano has convincingly argued, the “2019 elections mark the culmination of a decades-long process of ruralizationand ‘proletarianization’ of the BJP”.

It is not hard to figure out why. Political analysts can make overwrought contrasts between the mindset of urban and rural voters. But the political divide between the two has been rapidly shrinking over the last few decades. The improvement in rural infrastructure and connectivity, heavy migration, and diversified, rising incomes have meant that rural Indians are subject to the same political concerns and ideological currents as urban Indians. In the 2019 Loknitipost-poll survey, only 5% of farmers cited issues related to farming as a driver of their vote. Many more cited unemployment and development, much like their urban cousins.

Farmer politics, that reached its high noon in the 70s, when peasant-based parties (dominated by middle peasant castes) such as Chaudhary Charan Singh’s BLD displaced the rural hegemony of the Congress, has been declining since the 90s. The pincer movement of the Mandir and Mandal on one hand and the Market on the other has meant that, since the 90s, the political salience of farming issues ebbed away in favour of a sharper contestation on issues of caste and religious identity.

The BJP has built its rural base both on ideological messaging of ethno-nationalism that appeals particularly to the middle peasant castes and upper castes, along with well-publicised and effectively delivered welfare schemes that binds them to the rural poor. Unlike the vertically arranged networks of patronage that formed the bedrock of Congress’ rural hegemony till the 60s, the BJP’s system of dominance in rural India is thus structurally more resilient to occasional cycles of protests. That the protests have remained largely confined, outside Punjab, to the Jat belts of Haryana and Western Uttar Pradesh, suggests that there is no widespread rural anger against the BJP.

However, as earlier mentioned, these protests have succeeded in denting the image of the government and have provided a fortuitous opening to the Opposition parties. They can capitalise on the protests in two ways.

Firstly, it can help them in ideologically repositioning themselves in opposition to the BJP. The “Adani Ambani government” (to borrow the words of Rahul Gandhi) against the pious poor farmer is a potent political narrative. The caste-based parties in the Hindi heartland had started running out of steam even before the rise of the BJP. This political moment can enable them to recalibrate their political mobilizational strategies from caste to class, thus increasing their catchment area to a wider array of castes. This is particularly important in Uttar Pradesh, where the numerically strong but scattered Most Backward Castes have drifted rapidly towards the BJP.

The protests have already given the impetus to the Congress, which is often charged with lacking ideological clarity, into adopting a shaper left populist rhetoric. Rahul Gandhi has situated the farmer protests in a larger anti-capitalist narrative, repeatedly stating that the government cares for their friends “Ambani and Adani” more than the ordinary people of the country. Unlike the Rafale issue, which dealt with the remote issue of French aircrafts, the farmer protests present an emotionally powerful political canvas on which to paint his populist attacks on crony capitalism.

When P Chidambaram, a member of the liberal camp in Congress, tells Parliament that the government only works for the top 1% ‘parijeevi’ (parasites) who control 73% of the country’s wealth, the party’s lurch further Left is unmistakably highlighted.

A key challenge to this ideological repositioning is that opposition parties must integrate their diagnosis of the farmer crisis with their larger thesis on economic precarity, joblessness, and development. This is because farmers are equally concerned with these issues as their urban counterparts. In fact, some of the largest agitations of peasant castes in recent years, the Patidars in Gujarat, the Marathas in Maharashtra and the Jats in Haryana, have been on the issue of jobs. For instance, Rahul Gandhi must also explain how crony capitalism of the BJP threatens jobs and development, and what is the alternative vision of the Congress in addressing those challenges.

Secondly, the present moment can provide opposition parties with the necessary push to refurbish their organisational resources.  Indian political parties are known to be organisationally weak, and reliant on local elites to act as a bridge between them and the public. This weakness has been made painfully apparent in recent years, where opposition organisational inactivity and ruling party hyper-visibility has reinforced the impression of the hegemonic irresistibility of the BJP.

A more proactive engagement with the farmers movement, such as holding rallies and public events in solidarity, with recharge the dormant workers of opposition parties, and activate party structures at all levels. It is perhaps with this objective in mind that the Congress party has planned to hold padyatras in every district this month.

Opposition political parties are right to lament that the media has become overly biased towards the BJP, which impedes their message from reaching the public, or that BJP’s control over networks of funding have left them strapped for cash. But righteous laments have little use in politics. The need for an active organisation in between elections becomes even more acute, in the face of a compromised media, to act as a consistent andreliable channel of communication with the people. And organisations can be overhauled,even in the absence of adequate funding, through harnessing the mobilizational potential of protest movements. The BJP essentially built up its organisation base in many states on the back of the Ram Janambhoomi movement, when it was in power no where in the country.

The BJP has successfully shifted the centre of gravity of Indian politics. It will not organically swing back towards the opposition parties. Therefore, when the contradictions in BJP’s system of rule presents the opposition with an opening, they must exploit it to the hilt to claw their way back towards the main stage. The farmers protests represent their biggest such opportunity over the last six years. Given the political shrewdness of the BJP, it might be a long while before they are presented with one again.