STATE OF PLAY | The epoch of Avoidable Circumstances 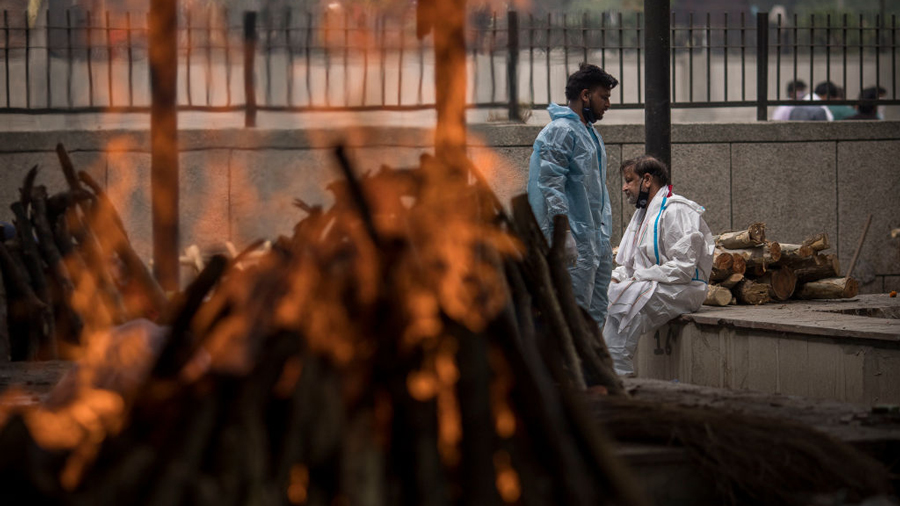 A man performs the last rites for his wife who died of the Covid-19 coronavirus disease during a mass cremation at a crematorium on April 20, 2021 in New Delhi, India.
Anindito Mukherjee/Getty Images
Sankarshan Thakur   |   Published 03.06.21, 02:51 AM

This is a historic time, a time frothing over with never befores like never before. We are lodged in a thicket voluptuous with unprecedented things. It is too soon to tell how the future will reckon this period in the lives of the Indian peoples, but what we inhabit is already a critical mass of time, what historians often call an epoch. We have been written into the first chapter of the prophecy of fifty or so years. It may only be just to title it Avoidable Circumstances.

We began with the joyous consecrations of ‘achchhe din’ upon which we acquired herd immunity to good sense and judgment in incremental bouts. Such that when our sacred rivers and banks began to eddy with our discarded dead, we sanctified it as ‘parampara’ and were quickly able to calculate what a minuscule fraction of our multitudes — our ‘demographic dividend’ — had been consigned to the latest hiccup of dereliction and uncaring. And be consoled, you disconsolate few; burnt or buried or floated, the departed all went the way of ‘mukti’, the eternal song of liberation.

In a 1987 essay titled “Kapuscinski’s Angola”, Salman Rushdie briefly regarded the insufficiencies of language in accurately describing what was becoming of our world and its condition. “What kinds of life should we call ‘ordinary’, here in the late twentieth century? What is ‘normal’ in these abnormal days? For many of us, any definition of the quotidian would still include notions of peace and stability. We would still, perhaps, wish to picture everyday life as rhythmic, based on settled and repeating social patterns. Ryszard Kapuscinski’s work seems to be based on his knowledge that such conventional descriptions of actuality are now so limited in application that they have become, in a way, fictions.” How is one to describe what happened — and has been happening a whole year — in our territories of eastern Ladakh? The Leader says nobody intruded, no alien is sitting there, there is no violation. He uses, consistently, indefinite pronouns, he refrains from identifying who that nobody is, he makes an ingenuous abstraction of it. That nobody killed many of our soldiers about this time last summer. That nobody is who our generals have been talking to with the deep disadvantage of heights, both physical and metaphorical. Why did our soldiers die? What are our generals negotiating? What’s the problem with this place where nobody came and squatted? Where is this nowhere place called eastern Ladakh where nobody is doing nothing? There’s a line drawn along there called the Line of Actual Control. It is a line nobody can see. If there is a problem with the line, we know where we need to sort it out; we shall take the battle to cartographers and printers, we shall emboss rogue maps trying to enter our territory with disclaimer stamps at customs. What words may come to describe such hyper-reality?

With hindsight and distance, and probably a degree of detachment, some future historian would probably find the right tools and narrative to portray the arrival and playing out of Avoidable Circumstances. Here are just a few footnotes, in no particular chronology, that may help lend it tendon, bone and flesh. All it will require are keywords fed into a search engine, and the chronicle will reveal itself.

There are going to be no names or dates or places here, mind you, just keywords; the task of recounting Avoidable Circumstances is the future historian’s.

We toppled our crown. Having taken hold of it in the stealth of night, we dragged it to the public square and quartered it to the applause of medieval hangings. We sent the mangled thing to the smelters. We fashioned, overnight, the largest prison house known to us, far bigger than the Gulag.

We made an indefinite abeyance of the writ of habeas corpus. We upturned the principle of bail before jail. We deemed it sedition to stand under the Tricolour and demand rights in the name of the Constitution. We deemed it anti-national to call the chief public servant anti-people. It was okay to riot and rampage and issue calls to death if you were on the Leader’s side.

The Leader sent a crony to the courts to bay at the truth. The chief judge posed on a Harley-Davidson when multiple thousands of our unfortunate ones were hoofing across the subcontinent on a scorched summer’s odyssey. A few lay slain by a train, and then we gave them trains. Many of them lost their way in the intractable maze of this geography; India is vast and India is incredible, what’s to be done?

We had ourselves temporarily robbed, our currency pronounced garbage, our access to earned and required cash severely restricted, our faith in institutions that afforded us sleep torpedoed. We had ourselves and our plight merrily mocked at from high rostrums. The Leader roamed and romped on a nature film-shoot, then ordered serial devastation of what he swore childhood love to. He also divined, sometime shortly after the shoot, that there can be nothing as clandestine as the cover of clouds, nor anything as effective as a straight-faced lie. How it worked. It gave him another, more luxurious, lease.

The Leader walked imperially among the peacocks, his minions routinely dispatched hounds to addresses that may one day ruffle peacock feathers.

We called our neighbours termites, and our own we called worse things, things that need to be exterminated one by one, or, at any rate, externed. If not by law, then by executive fiat, in the name of the people. The Constitution is to be ceremonially kissed, it is no thing to invoke.

There was a global viral pandemic. We appointed a paediatrician as brigadier and a profiteer druid as inventor of remedial potions. We took resort to our arcane wisdoms in astral concatenation and we banged pots and pans. We became the first ones to overpower the demon. We pronounced the Leader vishwaguru. When the virulence came stinging back, we called it a dark conspiracy hatched to disrupt the mansions the Leader was building on the debris of the ripped monuments to our bygone slavery.

We are in the throes of the seventh anniversary observances of Avoidable Circumstances. Very soon, we are also going to turn seventy-five. From where and how we began and carried forth, we could have deserved better. But we get to decide what we deserve. Do we still want Coronil?