The endurance of the American Dream 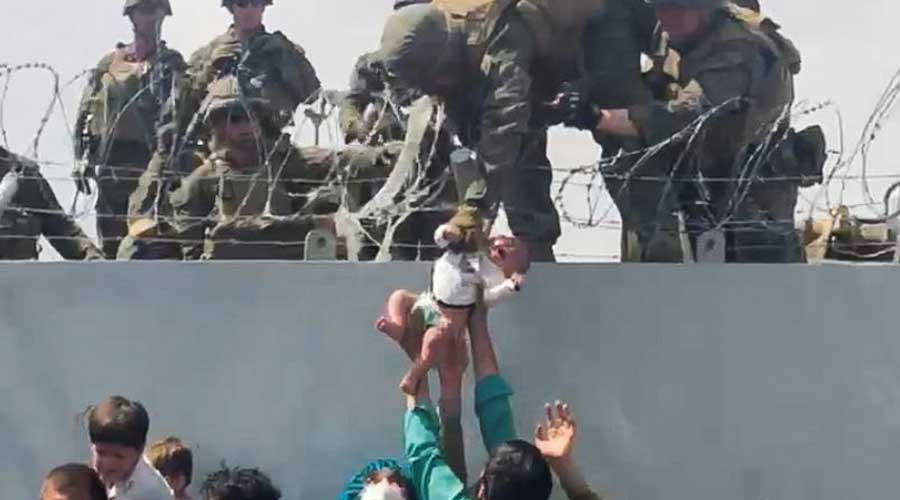 A baby is handed over to the American army over the perimeter wall of the airport for it to be evacuated, in Kabul, Afghanistan, August 19, 2021.
Twitter/piersmorgan
Sukanta Chaudhuri   |   Published 06.09.21, 12:41 AM

The West has got virtually all its own people out of Afghanistan. Very many of their Afghan workers and supporters (including those holding citizenship of Western countries) are left facing calamity, having passed their sell-by date. The British left behind the addresses of some local staff. The Americans bequeathed ampler data to the Taliban (not to mention a huge arsenal), and US military retaliation is killing children alongside terrorists.

America is a blessedly prodigal nation. It throws away 40 per cent of the food crowding its supermarket shelves and home freezers. It also stocks its larder of international acquisitions with territories, peoples and properties, cleaning out the marketplace of the nations. It crams its fridge without borders with goodies from — and in — all countries, consumes them at will, then trashes them when they grow rancid or simply boring.

This great global tuckbox attracts people from everywhere. The whole human race hankers after the luscious contents of America’s transnational larder. They ally with America, they settle there, they visit and interact with the country. At the very least, they try to savour something of its delights in their own homelands. All of us, myself included, stand somewhere in that line of distribution.

Now comes the catch: the consumables in this larder are none other than ourselves and our communities, our economic, political and cultural existence. We unthinkingly assume that other nations and individuals will pay for the dinner — in fact, be the dinner — while we sit at table with America, even if at the far end with a poor choice of dishes. We might well achieve this happy state; but also, conceivably, end up like the rooster in Sukanta Bhattacharya’s poem, that longed to reach its master’s table. So it did — not to eat but to be eaten.

This is so horrendously the fate of today’s Afghans that we may feel light-years removed from their plight, as indeed we are; but how totally from the underlying condition? To properly answer the question, we must define it more closely.

America is not simply a territory but a metonym for the West and what we associate with the West. America is the branded, almost vulgarized, epitome of an ethos and a state of mind that we prize for many reasons, right and wrong. The right ones must be hailed: they add value to the human condition, laying out a template for more ordered, productive and fulfilling lives than in almost any other option open to us. Again the Afghan predicament is prototypal: the choice of Taliban rule is so unthinkable that it makes hitherto sane men cling to flying planes in the urge to escape.

The alternatives are seldom so starkly opposed. In fact, they are adeptly bridged by many communities. Terrorist groups operate out of the West, exploiting its imperfect but genuine commitment to free speech, privacy and personal liberty that the terrorists themselves despise. At the other extreme, deeply law-abiding ethnic majoritarians (notably including Hindutva acolytes) embrace minority status in outlandish climes to encash the latter’s promise of freedom, opportunity and efficiency, and use the proceeds to advance contrary causes in their homelands. Alongside, and often opposed to them, a hyper-articulate intellectual class acutely analyses the defects of the Western order, but finds it opportune to do so from Western campuses. For all these groups, citizenship of a Western country is an unquestioned asset for their otherwise contentious agendas.

It is this evident openness, countering any alienation owing to location and culture, that makes the world look Westward and travel there. With time, people might discover the limits to such inclusiveness; even so it seems, and often is, markedly wider than the confines back home. The desperate crowds outside Kabul airport are qualitatively different from the old overnight queues and today’s online wait-lists at visa offices; but is there a visceral link somewhere? Where in the middle ground should we place indigent South Asians paying more money to people smugglers than they might earn if they ever reach their goal? Or the unabating tide of people pouring across Latin America to the US border, or braving the Mediterranean in leaky boats?

For such people, the dream of a hospitable West often dies on the journey even if they themselves do not. But the collective myth does not die. It is sustained by a modicum of acceptance in the host countries; by real and fictitious get-rich-quick stories; by deprivation at home, or what is viewed as such; by the global media and consumer culture. Higher up the social and educational ladder, the myth is more often validated by success; but it remains a rarer inflexion within the same paradigm. Does the high-flying NRI feel a stab of affinity with his displaced compatriot selling umbrellas on the street, or those demonized migrants — invisible, undocumented, toiling in farms and sweatshops — whom he might never encounter? After the partition of India, translocated Bengalis who had improved their lot felt unsettling twinges of kinship with those still adrift. Does something of the kind happen among the diaspora?

We were shaken to see parents handing over their children to strangers across the wall at Kabul airport. The circumstances remain unclear. A common explanation is that they were abandoning their offspring in the forlorn hope of wafting them to a better life. Is this utterly different from beleaguered villagers in the Global South consigning their somewhat older progeny to a journey into darkness, at the tender mercies of human traffickers? Looking farther, might we draw a moment’s mad parallel with the middle-class family whose plans, funds and fears have the sole object of propelling its younger generation permanently abroad?

No doubt I am raving. The footage from Afghanistan shows the deranging outcome when two civilizations implode on contact with each other. The images impose themselves on familiar untroubling scenarios, and others that don’t trouble us because we don’t think about them. Once we do, they can disorient our notions of the world.