The debate on academic freedom suffers from blind spots 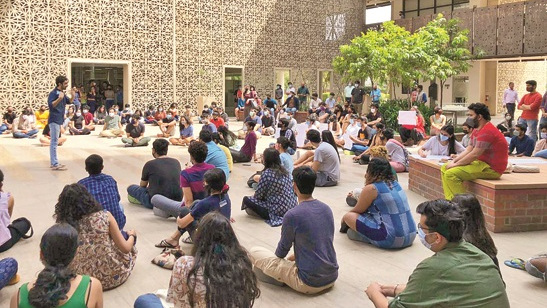 Two recent events have reopened the debate on academic freedom. One was the departure of two eminent scholars from Ashoka University; the other, an ongoing confrontation between the vice-chancellor and the faculty of Visva-Bharati. The cases are widely different in nature and impact. The Ashoka imbroglio exercised the nation’s intelligentsia; that at Tagore’s university hardly stirred even Bengal’s bhadralok.

Our view of these matters is skewed by geography and social visibility. Jawaharlal Nehru University receives unfailing attention. The worse turmoil at Manipur University over many years goes unnoticed. In Bengal, Jadavpur and Calcutta Universities monopolize attention over 33 other establishments.

This creates the false impression that academic intolerance in India chiefly affects prominent scholars and institutions. Of course that happens. In 2018, Ahmedabad University withdrew its offer of a chair to Ramachandra Guha after protests from the Far Right. But such dramatic instances are rare. The system functions to obviate them.

More often than not, there is no political dissent. The Indian Council of Medical Research reportedly approved an article on Covid-19 only after excising some data at odds with the government’s pandemic strategy. The same syndrome appears in the doctoring or suppression of socio-economic surveys. The objection is not to the content but the resulting ‘embarrassment’, as the IIT service rules put it: it threatens some extraneous agenda of the institution or the State. An iconic scientific institute in Bengal faces a diktat to operate more in Hindi to avoid ‘any unpleasant situation’.

The Central Civil Services rules now apply to teachers of Central universities. Many states have enacted or are mulling similar provisions. The cornerstone of these edicts is a ban on all protest and criticism. Equally ubiquitous is the micro-level regulation of routine activities: by literally mechanical means such as biometric attendance and classroom CCTV, or by monitoring private activities that do not affect one’s duties.

These formal provisions can be embellished by petty tyrants. One vice-chancellor deployed uniformed policemen at meetings with senior faculty. (No, there was no history of earlier violence.) Another returned unread any correspondence that did not address him as ‘Honourable’. A third, today, makes his colleagues surrender their mobile phones before meetings. In several states, it is common practice to appoint an IAS, IPS or army officer as vice-chancellor; or in private universities, a corporate luminary. Visiting a college or university, I have often been appalled by the subservience exacted by the institutional head from his academic colleagues.

In a word, the suppression of academic freedom in India is not a matter of beating back a tsunami of radical protest. For most part, it is small-minded, paranoiac authoritarianism that works precisely because the community is quiet and submissive. The basic harm is to collegiate morale and the spirit of participation. Teaching and research suffer as collateral damage.

Two features specially impede academic work: first, the growing curbs on publication and even public expression of views. To organize a conference is to invite surveillance. ‘Technical’ subjects are notionally exempt; but the line is hard to draw, not only in the social sciences but also in science and technology, on issues concerning public works and health, industrial or agricultural policy. Most preposterously, educators are silenced from discussing educational matters.

The other issue concerns research time. Scholars cannot find all their research material within the confines of the institution or on the internet. They need to visit libraries and archives, make field trips and do surveys, attend conferences. These activities are hampered by restrictions on leave, abolition of off-days, and the idle nine-to-five confinement in staff common rooms.

The young teacher-scholar soon discovers that she can do little beyond routine teaching. Needless to say, teaching should not be a routine matter: rather, a creative adventure. To prevent this from happening, the exercise is prefabricated and mass-produced. The University Grants Commission imposes a uniform curriculum across the land. The pattern of evaluation is also pre-set: brief, standardized and devoid of conceptual content to allow computerized marking. Entrance tests follow the same pattern, as even the National Eligibility Test for teachers.

In this robotic education system, virtually nothing is left to the actual educator. The teaching community is effectively disempowered. The same pre-imposed drill governs educational administration. Till the other day, teachers were selected by their Academic Performance Index, calculated not only mechanically but also with bizarrely skewed and volatile priorities. In such a milieu, institutional autonomy means little. It is often a euphemism for reducing funds, which the institution must then ‘freely’ seek elsewhere, usually by raising fees. The National Education Policy repeats the magic word, ‘autonomy’, like a refrain — while placing higher education under no less than four regulatory bodies plus a centralized Research Foundation. As it is, some institutions, entire states like Gujarat, and major funding programmes under the Union government confine scholars to a list of approved research topics.

The wonder is that free thought and innovation still linger on our campuses, so irrepressible is the intellectual urge of a section of our youth and their mentors. Let us thank them for their hard-won productivity, not complain that there is no more. The Western universities by which we set our benchmarks would face revolt against a tenth of these curbs.

It need not have been so. In the half-century since Independence, India developed a network of public universities with UGC support. Their bottom ranks were dismal (like today’s inferior private teaching-shops); but the top and even second tier achieved impressive gains we undervalue or ignore. They were bureaucratic but not authoritarian. Despite their cheapskate ways, they rustled up the infrastructure for productive research. Global rankings were then unknown, but there was intensive international exchange and collaboration: we could look the world in the eye. The public university was also the only space in our polity where young citizens of all classes and communities met on level ground: this did not endear them to the privileged orders. For reasons only tangentially related to its real deficiencies, this system has been dismantled in the new century, with no viable replacement.

I have spent 30 years at a university that made inspired use of the earlier system. Jadavpur University has many failings. The state of its campus is a disgrace. Its students are adept at creating mayhem, not always for wrong reasons. Its assured grants scarcely meet the salary bill. But in its heyday, it earned enough from research funding for a flourishing international profile, with more scientists among the world’s ‘top 2%’ than any other Indian university. Its most improbable success was 21 interdisciplinary schools that attracted up to a crore of external funding for every lakh invested by the university. This was possible because the faculty had full freedom to forage and negotiate within certain broad parameters — and, of course, with rigorous scrutiny of accounts. Given that freedom, many faculty were happy to shoulder the extra responsibility pro bono, pursuing innovative research that the teaching departments could not accommodate; yet the departments, down to first-year undergraduates, profited from that enriched atmosphere.

This productive freedom of operation was first threatened by the change of guard in Bengal. The ways of the present Union government make it virtually unthinkable today. In 2019, Jadavpur University received a substantial grant initiated by the Centre, though with 40 per cent state input. After a long lull, the campus started humming again. A year later, Delhi inexplicably shifted the goalposts to cut off funds mid-way, halting over 200 large and small projects and the careers of some 450 young researchers.

That Pratap Bhanu Mehta had to leave his post is deplorable, but his voice will be heard through other channels. Let us also listen to the silence of voices never allowed to speak, and weigh the loss of the knowledge we did not cultivate.