History at the gates 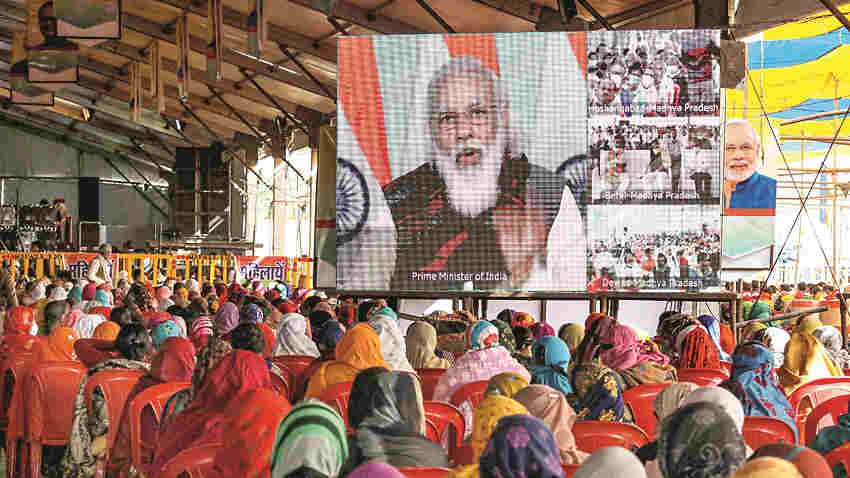 The remaking of a nation is typically a process that unfolds at a glacial pace over time. A few bellwether events however stand out, both as catalysts of change as well as signs for posterity on how the nation was remade. Siraj-ud-Daulah’s defeat at Plassey, the reconstruction amendments after the American Civil War abolishing slavery, Nelson Mandela’s release from Robben Island are some events to which historians have attributed special significance in shaping the future course of history of their respective nations.

Whenever India has a government led by the Bharatiya Janata Party, there is a narrative that the nation, founded on values of the freedom movement helmed by the Indian National Congress, is being slowly remade. Central to such a narrative is the cultural project of the BJP — asserting the rightful place of Hindus in the nation. That project is well-documented and such a national remaking is core to the raison d’être of the BJP. But with the passage of the three farm laws in Parliament, the prime minister has demonstrated a definitive intent to remake the nation economically. Sure, there have always been murmurs that BJP governments have traditionally been best friends of big business. But that is something that can be truthfully said of all major political parties in post-liberalization India. Yet, the farm laws are the boldest and most candid declaration by the BJP that New India will not be founded on a mai-baap sarkar but rather with the hard work of the individual farmer supplemented by the enterprise of the private sector. This is as bold as it is surprising.

At its core is a seriously contested economic argument for farmers’ prosperity. That Indian agriculture is not as productive as it can be is an acknowledged fact. Small land-holdings, the lack of credit available to farmers, outdated farming methods, scores of middlemen and a skew towards paddy and wheat owing to selective government price support all contribute to this state of affairs. The new laws choose to address one dimension of the problem — the dominant role of the State in Indian agriculture.

To this end, one of the new laws ends the monopoly of the government’s agricultural produce market committee that runs the local mandi. It gives farmers and traders the freedom to trade in any trade area, including on an electronic platform. The second law, in tandem, empowers farmers to enter into contracts directly with buyers bypassing middlemen who are an endemic feature of Indian agriculture. The third law, an amendment to the Essential Commodities Act, is most revealing — it limits governmental intervention in the agricultural market only in extreme cases of war, famine and so on. This, as the government has been at pains to point out, has nothing to do with the minimum support price for paddy and wheat, which is not provided under the Essential Commodities Act. Nonetheless, it is a clear sign of the determination of the government to be a facilitator rather than an active price-setter and regulator of Indian agriculture.

This is a distinct vision of how Indian agriculture can grow from the State-supported model in vogue at present. Central to this vision is the growth of new agri-businesses, which are expected to compete with State procurement processes. Whether such businesses will lead to greater benefits for farmers or worsen their lot is a hypothetical question that can only have hypothetical answers at present. But the bottom line is this — the new laws provide options to farmers to either sell to the State in the mandi or to private producers outside it. Simultaneously, it opens up the sector to a range of private actors whose enterprise is expected to make the system more productive. This combination of individual choice and invitation to enterprise is not primarily an economic argument for reform — it is an ideological one.

Economic libertarianism of the kind that underlies the farm laws — remove the State from the equation and let the market show the path to prosperity — has largely been tangential to traditional Indian right-wing thought. This conflation between the cultural right and the economic right in recent times is a fundamentally American idea born out of a distrust of the State and the championing of limitless individual freedom. The Indian right has never shared this distrust of the State or advocacy of individual liberty. In fact, with the exception of the Swatantra Party, the major intellectual strand of right-wing politics in India, the Jana Sangh and now the BJP moored by the philosophy of the Rashtriya Swayamsevak Sangh, has been that of cultural conservatism together with a swadeshi State that plays a dominant role in the economy. In some senses, that is classic conservative politics — as Eric Kaufmann has recently written, “Most voters lean left on economics and conservative on culture but no one represents them.” This is whom the BJP has traditionally represented, more so with the diminishing political smartness of the Left in India.

But with the farm laws, the BJP has taken a distinct libertarian turn on economics. As a party avowedly resolute about reform, it could have chosen to reform Indian agriculture in a number of ways — conclusive land titles for agricultural landowners would have been a game-changer that would increase the creditworthiness of farmers in one stroke. That it chose to whittle down the role of the State, something that it hasn’t done despite indications that it would do so to the MGNREGA or to the National Education Policy, is an unraveling of the traditional understanding of the Indian right. From a culturally conservative party, it is also becoming the Indian variant of the Republican Party of the United States of America — imbued by the doctrinaire belief that small government is the way to prosperity.

This is why the protests against the three farm laws enacted by the National Democratic Alliance government are the sternest test yet of the resolve of Prime Minister Narendra Modi of remaking the nation. The protests against the CAA-NRC, almost a year to the day, despite their largescale support and longevity, made no headway in their objectives. This was unsurprising given the focus of the protests was support for minority groups that are politically unimportant for the BJP. But the farmer protests are an entirely different kettle of fish. After all, the kisan in traditional political terms is the annadata, to be given free electricity and exempted from payment of taxes. Electorally, given that agriculture is the primary source of livelihood of 58 per cent of the Indian population, the vote of the farmer is the holy grail. When faced with such largescale farmer protests, the prime minister was quick to offer compromises ‘with folded hands and bowed heads’ — clause-by-clause readings, amendments and assurances that the MSP would not be touched. Only time will tell whether this is smart politics to fulfil his new economic vision or an unraveling of the vision itself.

Each of the prime minister’s offers demonstrates the knife-edge the nation is on at present. In their resolution lies the ultimate answer on whether the farm laws will be a bellwether event in the remaking of the Indian nation or simply yet another footnote in the glacial changes always afoot around us. The Singhu and Tikri borders are no longer mere outposts — they are the sites where history is being written.

The author is Research Director, Vidhi Centre for Legal Policy.Views are personal