The Beatles brought back 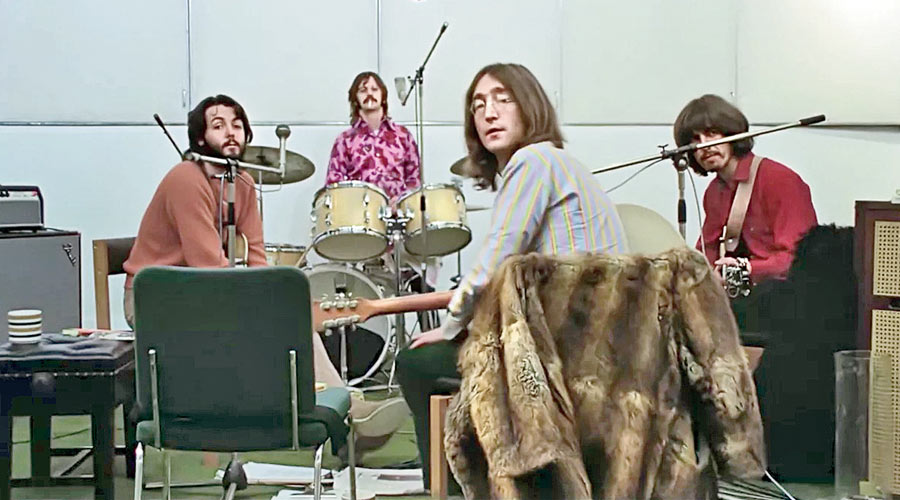 The Beatles: Get Back, the recently released three-part documentary, has been widely seen and reviewed. The original footage was shot across January 1969 by a team led by the director, Michael Lindsay-Hogg. The Beatles themselves commissioned the filming as part of a project that kept shifting shape across the time of the shooting. This four-week period also saw serious disagreements erupt among the band members that would shortly lead to the end of the group. Some of the original material was used to make the film, Let it be (1970). However, 60 hours of film and 150 hours of sound lay unused in the vaults till the film-maker, Peter Jackson, was asked by Paul McCartney, Ringo Starr, Yoko Ono and George Harrison’s widow, Olivia, to make a film from the archival material.

Get Back is just thirteen minutes short of eight hours, divided into three parts. I write this having seen only the first part, but the section is rich enough to warrant an examination on its own. The film begins with a quick history of The Beatles till 1968 through news footage, TV shows, and the films and promos they made. In these, odd things now catch the eye: the sheer fresh-faced cheer of these four men barely out of their teens; how pristine the Ganga looks in the black-and-white clips of Rishikesh and how smug the Maharishi as he leads the Fab Four down his garden path; the crazily joyful dancing of the young sardarji with the purple turban in the promo from 1968.

For the next two hours-plus, you’re inside a vast, bare film studio, mostly focused on a cluster of chairs and instruments at one end. In a Brechtian touch, you see the lights being set up for the constant filming; one of the two 16 mm Arriflex cameras shoots the cameraman operating the other one; you see the twin mikes taped together on each stand, one presumably for the music, the other to catch the conversations — something that will turn out to be crucial for both the films that end up being made, around fifty years apart. And then we’re dunked into this gripping filmed theatre which, among other precious things, shows us the birthing moments of songs that will become the aural cornerstones of so many of our lives.

For those of us who engage seriously with non-fiction cinema, Part 1 of Get Back becomes fascinating on many levels. We experience the seamless ebb and flow from magical jam sessions to acrimonious conversations, but we know that unlike today’s video cameras the film magazines would need to be changed every few minutes. Despite the obviously huge budget, the footage to audio-tape ratio tells a story: the Nagra tape-recorders would have been rolling constantly, the cameras less so, bringing into play that nearly extinct skill of old docu-makers — how to use great sound for which you have no visuals — with all the innocent-looking cut-aways being deftly employed. Unlike today’s documentaries, which often suffer from what one could call ‘hand-held diarrhoea’ where lack of genuine observation is covered up by a constantly waving camera, most of this film is shot on tripods, the montage building up the story between telephoto close-ups and wide-angle shots. Through this, the film manages to pull off a rare double trick: it delivers an immersive ‘fly on the wall’ experience — where you forget about the cameras and feel like you are right inside the situation — and, yet, the film crew is very much present and we are very clear about who is doing the filming. Watching, one is happily reminded of Robert Bresson’s axiom: Stay in one place. Dig deep.

We see Paul, George and John, doodling with guitars, Ringo behind his drums on the raised platform; we see them warming up, passing tunes from one to the other like footballers knocking around before a match, suddenly going into an old rock n’ roll classic or a contemporary Dylan song or segueing into one of their own hits; in the middle of them crooning “Nothing’s gonna change my world”, John mutters, “I wish it f**king would!”; a lit cigarette is impaled into a guitar string sticking out of a tuning key, a bit later another smouldering butt nestles between two microphones; the graveyard of dead sandwiches and empty teacups spreads around the chairs as the day goes on. The four of them are manic at times, almost falling asleep at others. Money is never an issue — there’s clearly lots of it — but it doesn’t solve the creative problems. There is a support team constantly buzzing around — film director, recording engineers, music publisher, sundry mates, people bringing food and drinks. Yoko sits right next to Lennon, unmoving, silent and opaque. Linda Eastman (Paul’s partner) arrives a few days later and quietly begins working her Nikon F camera.

All four men are tense. There is constant push from high-ranking members of the entourage for climaxing the project with a concert in front of the ancient ruins in Sabratha on the Libyan coast: “Imagine a show, with 2000 Arabs!”

We see that the now immortal Jojo from Tucson, Arizona was originally “Sidi Abdul Rami was a Pakistani” and there was also a Puerto Rican immigrant in the song, “Get back”. One idea was to protest against the racist rhetoric rising in England at the time. At one point, Paul goes into blues mode: “F**k Enoch Powell, f**k Enoch... Powell.” The criss-cross of the Liverpudlian accent is constant, American English is an oft-mimicked influence but it never pushes into how the four of them speak or sing or think. Interspersed with the Scouse drawls, the beautiful little shards of songs keep bubbling up through the arguments and personality clashes. George says, “Here’s a song I wrote last night” and sings “I, me, mine”. A bit later an attempt at “She came in through the bathroom window” really catches fire and they all exchange looks, smiling, knowing they’ve got yet another beauty.