Sustained attacks on the media seek to put governments above accountability

Elected governments, including India's, are exploiting shrill nationalist rhetoric to impede the public’s right to knowledge 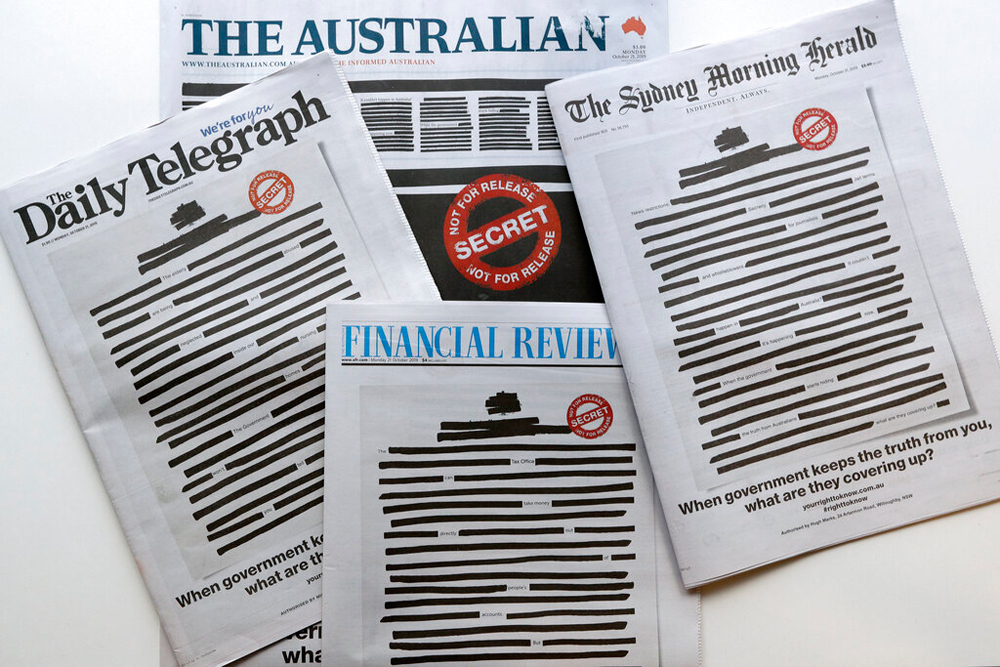 Newspapers with redacted text on their front pages in Sydney, Australia, on Monday, October 21, 2019. Australia, even though it is a democracy, is yet to extend constitutional protection to the freedom of speech.
(AP photo)
The Editorial Board   |   Published 23.10.19, 06:52 PM

A blank page can, at times, speak a thousand words. In a rare moment of solidarity, rival newspaper publications in Australia agreed to run front pages that were designed to appear as if they had been heavily redacted. The gesture was meant to be a sign of protest against a controversial legislation that seeks to curtail the freedom of the press in that country. Incidentally, Australia, even though it is a democracy, is yet to extend constitutional protection to the freedom of speech.

Some democracies — India is an obvious example — have accorded such a privilege to the right to express credible or critical opinion without fear. In a solemn extension of the philosophy that seeks to conflate citizenship with liberty, Article 19(1)(a) of the Indian Constitution has vested in citizens the power of the freedom of thought and expression. Yet, it is also true that democratic India has witnessed periodic, orchestrated assaults on the fourth estate — the media fraternity that believes itself to be the guardian of freedoms integral to the idea of democracy. In fact, some newspapers in India did what the Australian papers have done decades ago. The declaration of a state of Emergency by Indira Gandhi in 1975 had forced Indian publications to adopt such a novel form of protest, something that has since been emulated around the world. The Emergency is now a thing of the past but the dreaded sword of Damocles continues to hang over Indian media. The threat is borne out by the country’s dismal rankings in the global press freedom index. India dropped a couple of places on the index this year to rank 140 among 180 nations. Some of the strategies of intimidation are discernible. Governments have been known to deny advertisement to publications that are critical of them. At times, the coercion can take other, no less objectionable, forms. Citizens and journalists have been harassed, or even silenced, by regimes either for their independent views or for conducting exposés. There are several sticks to beat press freedom with — defamation, and, in more recent times, the bogey of anti-nationalism. There are concerns that elected governments, including the one ruling India, are increasingly exploiting the shrill rhetoric of nationalism to impede the public’s right to knowledge and — more damagingly — justify authoritarian interventions. Sustained attacks on the media are meant to place governments above accountability. Does not democracy shrivel in the absence of the principle of accountability?