The battle for the Ideas of India 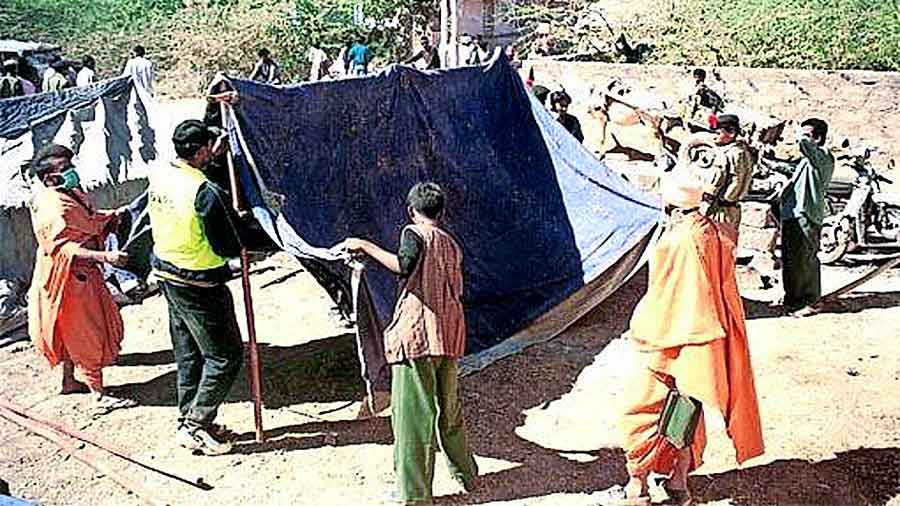 Sometimes, when I think of India on the day it was born, August 15, 1947, I have the image of people starting to erect a huge,open-sided tent over a large mass of suffering human beings. The tent is made of patchwork, from whatever material is available, with all sorts of colour, all kinds of texture, being sown together. To stretch over so many people,this covering material needs supports,both at its edges and in the middle, and these supports too are made from diverse material and are of different heights.The people who have volunteered for the job of erecting the tent have no choice but to work together, work in concert as well as attentively in sequence: Section B needing to wait for Section A to complete its task before it can begin its own, with Section C and D waiting their turn and so on.

At minimum, the covering is meant to protect people from the heat and the rain. From the glare of exploitation, the long drought of scarcity, the drench of widespread disease. No matter what the apologists of the British Empire now tell us, let us never forget that a smallish country halfway across the planet made itself the most prosperous on earth on the backs of our labour and our resources for nearly two hundred years. Let’s remember that it then abandoned the million sit had squeezed dry to continuing poverty and the aftermath of the mass violence triggered by its precipitate withdrawal.In 1948, the year after the British left India, despite the great depletions of the Second World War and the loss of their largest colony, they could institute and fund the National Health Service,which provided health coverage to every Briton, no matter how rich or poor. The government could re-target tax money and deploy it to this end with conscious,educated mass support because of the education system that had been put in place over the previous century, a system which was, like everything else,funded by the spoils of Empire. After the shocks of the Depression and the War in the late 40s and 50s, the United States of America, Britain and western Europe delivered access to university education to a wider section of their populations than ever before. This meant that capitalists were paying taxes that funded the education of many youngsters who used that knowledge and chose to become some shade of liberal, socialist or communist,young people who would spend the rest of their lives fighting to instal some checks and balances against rampant,profit-making corporations.

In the meantime, in India, the problem in erecting the tent was the matter of sequencing: you could not have basic education without basic health but,equally, you could not have basic health without a modicum of education; you could not allow entrepreneurs a free-run towards profit in an obscenely unequal society but there was no way of creating a more equal society without giving private industry some opportunity to grow(the limitations of the Soviet Five-Year plans were evident even as we copied them to some extent); economically, you could not shut yourself off from the rest of the world, yet there was no question of pawning the country’s resources to the multinationals backed by the big Western powers (the examples of what was then happening in Iran, Congo and South America were vivid and bloody). Nehru, Patel, Azad, Rajaji and other leaders navigated the young, vulnerable Republic through these sharp, contradictory rocks but in this they were hardly alone — helping to erect and shore up different sections of the tent was a whole army of labourers, farmers, dedicated administrators, politicians, social activists,military servicemen, intellectuals and artists.

History continuously redacts itself.Most of the people who were alive in those first formative years of Independence have now passed on. The ones who were then kids — or just born— now rule over us, even as they themselves stand on the exit ramps of life. In the intervening years, one of the main struggles that has developed within the nation is the battle for memory, a war over what is to be forgotten and erased,over what is to be remembered and how it is to be remembered.

Even as this and other struggles have enlarged underneath it, the enormous and complex task of erecting that basic tent has never been completed. It has been ongoing, stopping at times, starting again, stalling again. At times, segments of the covering have been brought down by gales and storms from the outside;at other times, bits of the tent have collapsed when internal supports have broken down or have been deliberately removed; some areas have had firm covering for long periods, while others have remained exposed to the elements. After seventy-five years, this partly secure,partly ramshackle, leaky but colourful patchwork held up by an assortment of poles and supports is what we call India,Bharat, Hindustan, desh, watan, mulk. This trembling, uneven structure maybe kept together by a whole variety of jugaad, but it is also vast and has a sort of miraculous togetherness, which is different from any rigid ‘unity’.

In the warren of substructures that have come up below the larger covering,often people in one corner have no idea what others are doing in another pocket.From time to time, we’ve seen ‘leaders’,politicians who’ve managed to work themselves to the very centre, attempting to push other people to the margins and even out of the sheltering cover of the tent. In striving to do this, they can be seen hacking away at the strongest supports, tearing holes into the strongest covering. We can see that if these people continue, they will shortly bring the roof down on everybody and not just on the sections of the populace they have labelled the enemy.

After seventy-five years, it should be clear that there are not just one or two ‘Ideas of India’ but multiple competing ideas of what our country should be. We need to interrogate each of these with cold-eyed urgency. Within a few years, roughly 20 per cent of all the humans on this small, troubled planet will be looking to shelter under the tent we call India. As ethnicities and genetic groups increasingly mix with one another,our species is moving towards multiplying micro-diversities rather than any overarching homogeneity. The people we call Indians are centrally apart of this — in a hundred years, people will hopefully shun any ideas of purity,whether regional or religious or caste identities; there may not be any Bengalis or Gujaratis, any Hindus or Muslims,any upper or lower castes as we understand these categories today. Climate change, global warming, ecological crises, whatever your preferred codification,will need large masses of people living adjacently to work with rather than against each other. Therefore, we must ask: which idea of India provides succour and safety to the widest variety of people? Which idea is most accommodating of difference, whether ethnic,racial, religious, of sexual orientation,of differing practices of living? Which idea will ensure the fairest distribution of increasingly scarce resources? Which processes of completing, repairing and shoring up the loose tent that was begun 75 years ago will provide the best quality of life to the largest number of people?