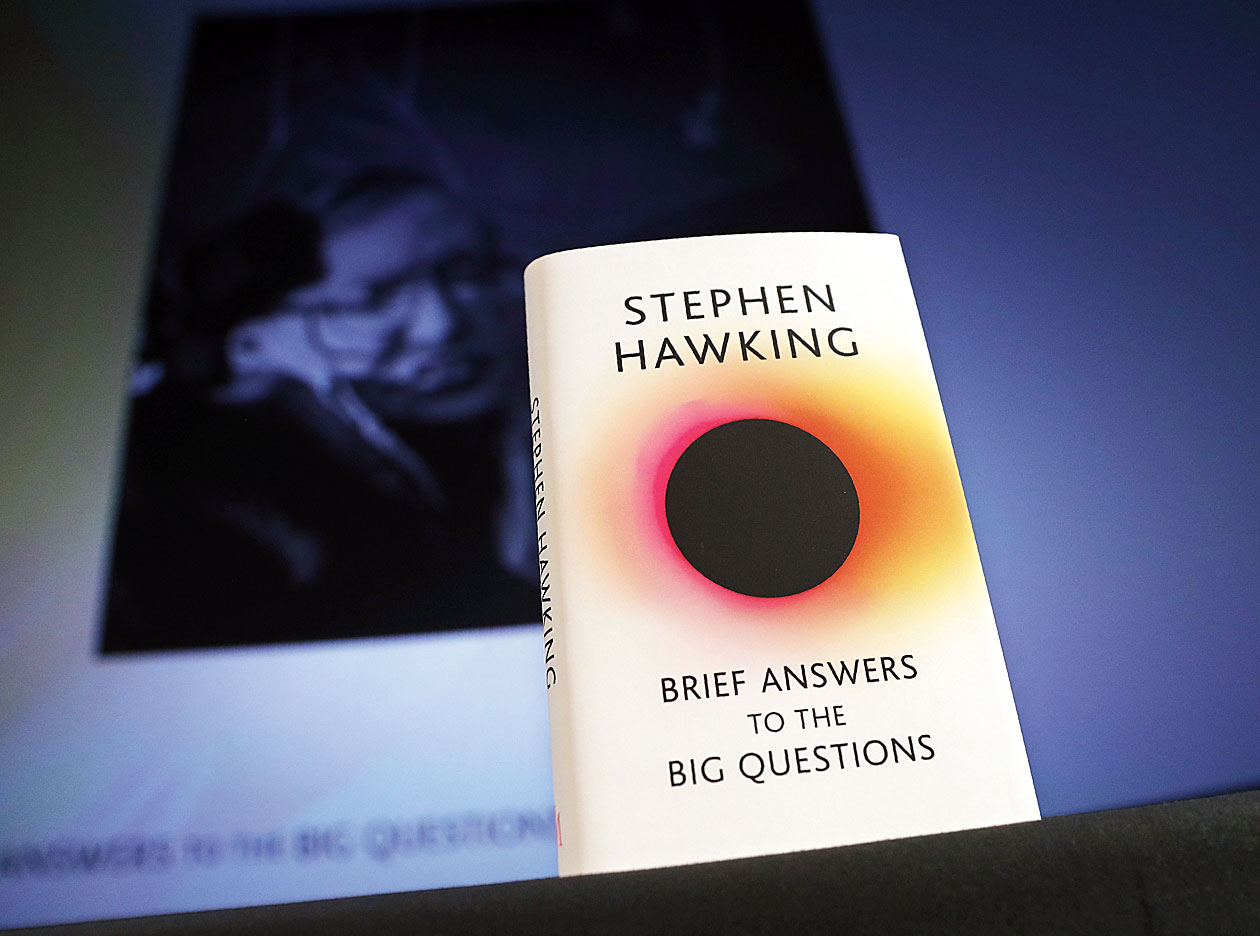 Stephen Hawking's book "Brief Answers to the Big Questions" at its global launch in the Science Museum, London, on October 15
Adrian Dennis / AFP
The Telegraph   |   Published 25.10.18, 03:45 AM

Sir — A new book by Stephen Hawking, Brief Answers to the Big Questions, has been published posthumously. It has quickly garnered much appreciation. The book touches upon some controversial issues, such as the existence of god and extraterrestrial life. Apart from being a legendary scientist, Hawking was a celebrated author too. A Brief History of Time by Hawking, for instance, has sold more than 10 million copies since it was first published in 1988. It is fitting that his ashes have been interred between the graves of Isaac Newton and Charles Darwin.

Sir — In 2014, when the National Democratic Alliance government came to power, it made tall promises about upgrading rail infrastructure. However, the incident in Amritsar, in which more than 60 people lost their lives, clearly shows that nothing much has changed in the intervening four years. A train ploughed down revellers while they were standing on the tracks to watch a Dussehra event (“Train crushes crowd as Ravan burns”, Oct 20). This accident happened barely two kilometres from the Amritsar railway station. The driver should have slowed the train down to give people more time to move away from the tracks. Moreover, the event at Joda Phatak, the site of the accident, is apparently an annual affair. So, the railway authorities cannot claim that they were not aware of the function.

Sadly, even though so many lives were lost, the state and the Union governments seem more interested in deflecting the blame. If this is the attitude of those in power, more tragedies are bound to occur.

Sir — The tragedy in Amritsar should teach us a bitter lesson. People should never stand on or cross railway tracks without permission. This can be construed as trespassing and is punishable under Section 147 of the Indian Railways Act. Further, it increases chances of accidents. The decision to burn an effigy of Ravana in Amritsar near the tracks was, therefore, an ill-thought-out one. Spectators scrambled towards the rail tracks after the effigy was lit and the fireworks went off.

The organizers of the Dussehra event should be held accountable for the deaths. However, there was negligence on the part of the Indian Railways too. The level crossing at Joda Phatak was an unmanned one. If there are unmanned level crossings within a city such as Amritsar, it is anybody’s guess as to what the condition is like in the countryside. India has the second-largest rail network in the world. But it suffers from an acute lack of infrastructure. For how long will common people pay the price of official apathy?

Sir — It has been alleged that the organizers of the Dussehra programme at Joda Phatak did not seek permission from the civic body. If this is true, then it is a serious offence. Curiously, the event is held every year. Moreover, this time, the local legislator, Navjot Kaur Sidhu, was the chief guest at the function. Some witnesses suggest that Sidhu fled the scene after the accident; she later turned up at the hospital where the injured were admitted. Strict action must be taken against her and the organizers.

Also, the role of police personnel should be probed. Why did they not stop the programme if the organizers lacked requisite clearances?

The Punjab government and the Centre have announced an aid of five lakh rupees and two lakh rupees respectively, to the kin of the dead, but no monetary help can ever compensate for the loss of near ones.

Sir — What happened on Vijaya Dashami in Punjab is heart-rending. But what is even more tragic is that the political parties and government agencies are shamelessly trying to pass on the blame to others. There were lapses at multiple levels; all those responsible for the mishap must be brought to justice.

There is also a need for people to introspect. Why did so many revellers crowd a busy railway route risking their lives? This incident shows that one should be taught from a young age to behave responsibly in public spaces. A little precaution could go a long way in averting such crises.

Sir — The attempt of the Indian Railways to give itself a clean chit in the Amritsar incident is preposterous. The railway minister, Piyush Goyal, must take moral responsibility for the deaths.