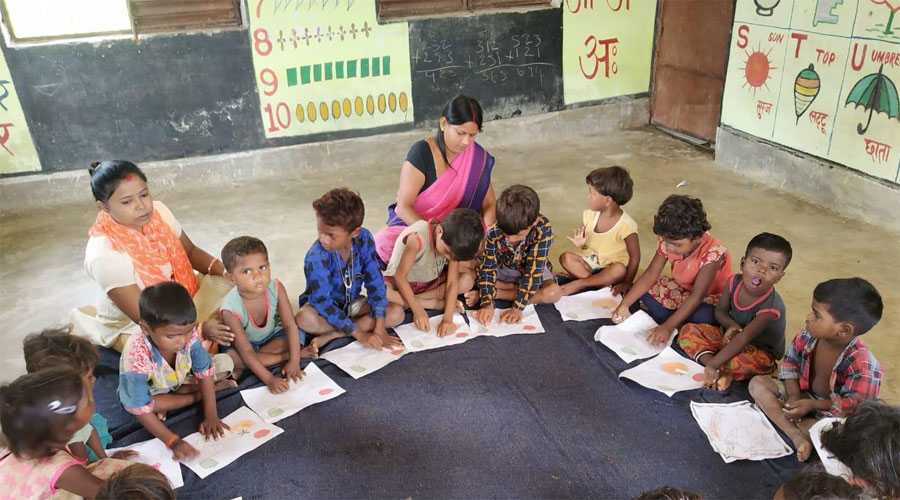 Full privatization, if it happens, or absorption into school complexes, as the National Education Policy proposes, will defeat the anganwadis’ purpose.
File picture
The Editorial Board   |   Published 31.12.20, 12:12 AM

It is an unfortunate country in which many feel compelled to doubt the government’s motives even in a move towards improvement. In Uttar Pradesh, 500 anganwadis will be upgraded jointly by the Anil Agarwal Foundation, the philanthropic arm of the mining company, Vedanta, and the Bill and Melinda Gates Foundation in partnership with the Centre. This is creating discomfort. The anganwadi programme, maintained by the Integrated Child Development Services, provides pre-school children and their mothers from underprivileged backgrounds with nutrition, apart from offering the children basic learning through play and, often, daycare. Although anganwadis face numerous drawbacks, including in infrastructure and spread, their success in reducing infant mortality rates and making a dent in early malnutrition has been acknowledged. Their failures are largely a result of government disinterest: a parliamentary standing committee report shows that in 2020-21 the women and child development ministry that houses the anganwadi programme received one per cent of the budget — as in the last five years. But children and women make up 67.7 per cent of the population.

The government may be short of funds for anganwadis, although it has no problems building a Statue of Unity or a Central Vista. No one denies that upgrading the anganwadis is needed; private bodies can provide certain fixed and time-bound services under government guidance. Yet many feel that the move in UP is the first step towards privatization. Worse, there is no transparency in the way the Anil Agarwal Foundation was chosen. It has been running Nand Ghars or modern anganwadis with the best amenities — reportedly 1,700 by 2015. It is far from reassuring that the name is meant to suggest the house of the child Krishna. Nand Ghars are being presented as the model that should be replicated by anganwadis across the country. Yet Vedanta, the foundation’s parent organization, has been severely criticized for violating the human rights of tribal people in Odisha as well as environmental safety measures. Full privatization, if it happens, or absorption into school complexes, as the National Education Policy proposes, will defeat the anganwadis’ purpose. And there should be transparency in selecting private entities that can help in the programme. The slightest hint of religious labelling should be avoided. Anganwadis are India’s pride. Governments should treat them as such.