Public discourse and the democratic response 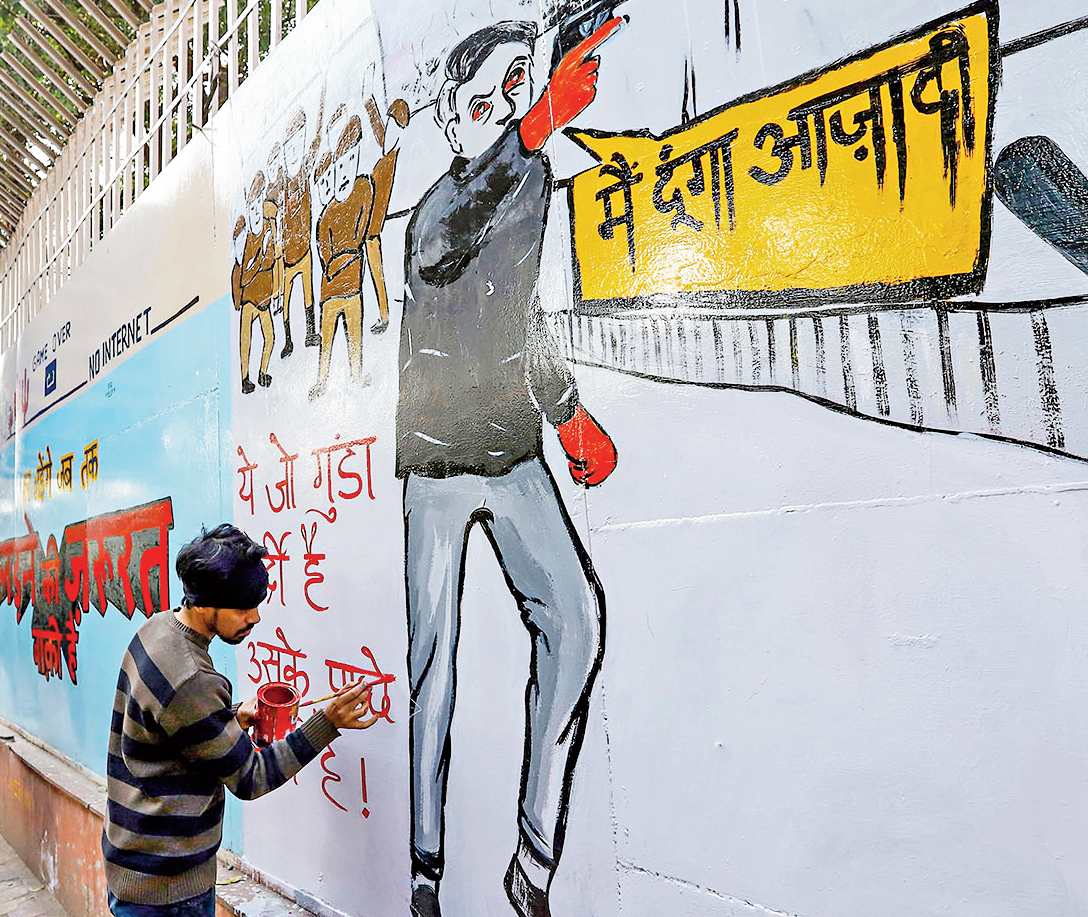 Language is a strange system of signification. In it, deciding the meaning of some really difficult looking terms is relatively easier than explaining the meaning of some easy looking terms. For instance, ‘anthropocene’ uncomplainingly admits being “the name of the era in which the human footprint on Nature has crossed the tipping points”. In contrast, ‘nature’, a relatively simple looking term, may pose great difficulties in explaining it with certainty. Does it mean ‘all that exists before and after Life’? Does it mean ‘human characteristics, the human nature’? Or ‘all that is not culture’, or something else and divine? And if it means all of these, the inner contradictions between them make one wonder how or why this term carries within it so much paradox. Even more difficult to explain is the word ‘meaning’. The dictionary, which is meant to be the much admired storehouse of meanings, will tell you, with the greatest possible callousness, that it means “what is meant by a word, action or idea”. Do not ask what is meant by ‘what is meant’ as given in this definition, simply because you hit a semantic wall here. Although created for explaining meaning, no good dictionary pretends to know what ‘meaning’ means. This is not because dictionaries are ignorant, but because they know quite well that meanings of words shift from time to time, and often words are employed precisely in order to cause such a shift. Over the last few years, I have noticed a conspicuous shift in meanings of several words and expressions. Here is a random list, though by no means is it exhaustive.

The gentlefolk who like to talk about books, culture and politics over a cup of coffee or a friendly peg are now called ‘the Khan Market intellectuals’. Those who feel that injustice anywhere — whether in Kashmir or Chhattisgarh, in a university or outside — is their concern and voice it are ‘the tukde-tukde gang’. Those who think that humans are humans irrespective of one’s religion are ‘pseudo-secularists’. Anyone pointing out that the government is anti-people is ‘a traitor or desh-drohi’. A person critical of the prime minister is ‘an urban Naxalite’. A mob that wants to lynch an innocent person is ‘protector of cows’. The person who gets lynched is ‘an offender deserving of an FIR’. ‘Ghar mein ghuske marunga’ and ‘chun-chunke marunga’ mean the ‘new idea of a welfare state’. Grant of citizenship means ‘not allowing people of a certain religion to reside in India’. ‘Kapde-se pahechane jate hai/ their dress reveals it all’ means ‘the people who do not like the Hindutva idea’. This last, by the way, is an antonym of ‘suit-boot-ki sarkar’ which means ‘Hindutva dressed up in a half-million worth jacket’. ‘Choukidar/protector or guard’ means ‘benefactor of cronies’. ‘Beti bachao/save girls’ means ‘honour the rapists’. ‘Operation kamal/ lotus’ means ‘a moral holiday’. ‘Kisi- ko darne-ki zarurat nahi hei/ no one need be afraid’ means ‘they will all be put behind bars’. ‘The prestige of India has shot up internationally’ means ‘major international newspapers have editorials criticizing India’s discriminatory policies’. The inaugural speech in the annual Science Congress means ‘promotion of ludicrous and non-scientific ideas’. A ‘56-inch chest’ means ‘heartless treatment of farmers and tribals’. ‘Pariksha pe charcha/ discussing school examinations’ means ‘assault on students in university campuses’. ‘Pradhan sevak’ means ‘one who shall pay no heed to public opinion’. ‘Widow’ means ‘the Opposition leader who lost her husband for the nation’. And, ‘election’ means ‘war and nothing less than a war’.

Students of literature are taught in their study courses to identify how many new phrases and words were brought in circulation by great poets and writers like Shakespeare or Milton, Kabir or Tukaram. The number of expressions and terms that the current regime has brought in use is significantly larger than any Shakespeare or Kabir ever managed to do. And all of these expressions spew out unrestrained contempt, hatred, anger and aggression. Following the well-set practice in the field of literature, the makers of this new ‘language’ should be described as the ‘the hate school’.

If Sigmund Freud were to be asked to explain the aggressive verbal behaviour, he would have pointed to sexual deprivation and even impotence of persons using such language. Scholars of mass psychology may point to the strategy of appealing to the baser elements in the ego-field for creating a new brand of politics. Historians may place this political discourse in the category of vandalized public morality. Linguistics has a different take on this matter. It investigates and assesses the viability of the discourse.

Language, whatever else it may be, is a social system. Once new meanings get associated with some already existing expressions, they no longer admit the monopoly of their first users. This means, more and more members of the political class will use them, more and more frequently. Contempt and hatred offer to their first users a sense of self-proclaimed moral superiority, albeit a false sense. When they are used by all, such words produce filth and garbage in the terrain ethical. The hate school has managed to turn the public discourse into a cesspool. In his time, Mahatma Gandhi contributed to the public discourse words like ‘swaraj’, ‘satyagraha’, ‘ahmisa’, ‘civil disobedience’ and ‘yatra’. Together, they gave a moral edge to the freedom struggle. What the hate school has contributed to India’s public discourse has by now become commonplace. Every family, every evening, gets a taste of this new discourse as the television sets are switched on. Violence in language is worrisome; its normalization and socialization are even more so.

Dictionaries may not know the meaning of meaning; but human societies certainly know how to negotiate the assault of violent language on civility and common decency in public discourse. Language, indeed, is a strange system. It has an inner resilience and when aggressive language tends to become language aggression, language declares a semantic strike. It disallows communication and the possibilities of dialogue come close to an end. Any linguist will tell us that the widespread protest in India is not just a rejection of the discriminatory Citizenship (Amendment) Act, the National Register of Citizens and the National Population Register. It is a lot more than that. It is saying that unless the ‘hate school’ does not cure itself of the hate filled language, dialogue of any kind will be impossible. To desist wisely or to persist foolishly is the choice of the ‘hate school’. The unprecedented protest has dragged out the hate school to the crossroads. The people of India have opened the dictionary to see what the haloed expression ‘the people of India’ means.

The author is a literary critic and a cultural activist ganesh_devy@yahoo.com

At Shaheen Bagh, mothers see children get lesson of a lifetime

Shaheen ‘experiment’. Did you mean it, PM?