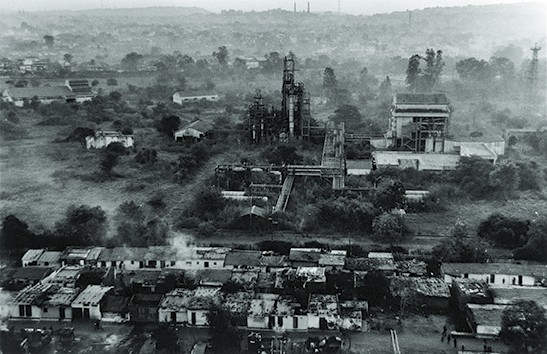 Two recent events triggered this essay. On May 7, 2020, a polymer plant at Visakhapatnam that had been shut for a while had a gas leak, which claimed the lives of 12 people. A similar gas leak occurred in Chhattisgarh immediately afterwards. Both events were treated as big news, but one felt as if two types of disaster were competing with each other. Reports on the coronavirus pandemic stated that 16 exhausted migrants had been run over while they slept on the railway tracks. As one greeted each event with horror, one realized that each was being presented as an exhibit or a spectacle. Two days later, there was little mention of the gas leak and the memories it evoked of the Bhopal gas disaster.

The Bhopal gas disaster is counted as the world’s biggest industrial disaster, yet there is little memory of it. It is a terse mnemonic, even though very little of its memory remains despite courageous battles to keep it alive. The question we have to ask is: what is memory, and why does it fail around such epic battles?

Today, one can easily state that the world’s biggest gas tragedy faced the tactic of erasure from day one. The early reports of the journalist, Rajkumar Keswani, warning of a leak were completely ignored and sidelined. The State, in fact, began its project of erasure and denial early. Muslim graves were dumped with four bodies and given the certificate for one. The census and the map, which are critical methods of information-gathering, were used to bring down the tally of the dead. The complicity between State and multinational was clear from the start. Arjun Singh, the Congress leader, used to hold his party meetings at the Union Carbide guest house. Whatever information that was there was gathered by courageous civil society activists like Anil Sadgopal, Alok Pratap Singh, Satinath Sarangi, the Bhopal Group for Information and Action and the Medico Friend Circle. The most ironic fact that they revealed was the government’s hostility towards the victims. The victims’ very presence revealed the ineptness of the State and its scientific pretensions. While watching the current regime ritually salute the medical workers today, one remembers its attempt to break the pregnancy survey in the aftermath of the gas tragedy. Somehow, the elite felt that Bhopal did not fit our imagination, and someone as distinguished as the late lawyer, Nani Palkhivala, claimed that Bhopal could only be settled in courts in the United States of America.

If the sadness lay in the hostility and the antipathy of the State to disaster victims, the irony is that Bhopal as memory is hardly alive. This essay is not an act of lamenting or breast-beating, but of pointing to the amnesia to emphasize the importance of memory in contemporary society. One must emphasize that memory is not a rogue repetition or a mechanical act of hypocritical remembrance. As activists show, memory is trusteeship and remembrance in an industrial society that makes obsolescence, triage and erasure part of its everyday rituals. An ethics of memory has to become central to any act of technology. Resistance is a creative act of remembrance. The journalist and activist, Rama Lakshmi, has built a museum on Bhopal not as an act of taxidermy but as a way of keeping Bhopal alive and as something creative into the future.

Secondly, memory is an act of trusteeship. Memory as an act of trusteeship attempts to make sure that later disasters do not repeat the same mistakes. During the Bhopal tragedy, a patient was moved along an assembly line of erasure where his role moved from the victim to a secular survivor, to a medicalized patient-subject to the clinical eye, to a hypochondriac unresponsive to the activities of the State, eventually becoming a vagrant. As one watches the coronavirus, one sees a middle-class State treat the migrant as dispensable. He becomes, by definition, a suspect citizen thrown to bad treatment and perpetually vulnerable to lathi-charge. Bhopal officialized triage as a policy of dispensing with vulnerable people. The coronavirus creates the same mentality. Only now, there is no movement of civil society activists keeping ethics and ethics of memory alive.

Memory is necessary today as an act of dissent, of resistance and inventiveness. Without memory and resistance, the disaster victim loses his claims to citizenship, to his ontology of suffering and to his rights as a victim. Despite the documentation, Bhopal has made no claim to epic poetry or theatre or folktale. There are brilliant photographs of the disaster, but little effort to build a valid text of suffering around it. As Bhopal fails, later Bhopals disappear into footnotes easily erased from memory. An amnesiacal State and an indifferent society make disasters forgettable parts of a collective responsibility.

What I am trying to suggest is that disasters have been systematically subjugated by the State. The Partition lost its orality of suffering as it historically became a text in the ‘transfer of power’. The Bengal famine became a rationale for science policy, for the use of statistics and survey. The Emergency became a tool to validate the violence of development, while the 2002 Gujarat riots became a ritual for justifying a genocidal State as a majoritarian strategy. The coronavirus stands at a similar threshold of erasure and indifference. As a result, disasters have become a pretext for compounding enclosures and panopticons as ritual methods of the State. It is almost as if the Citizenship (Amendment) Act in Assam and the lockdown as a result of the coronavirus are increasing the powers of surveillance of the growing State. Only civil society can act as an obstacle to its strength. Sadly, each disaster becomes a way of consolidating State power.

How can we resist it? Firstly, one has to create a different sense of the body. The body is losing its sense of sacrament. As our science and our economic policies build more around the ontology of the corpse on the statistics of the body count, there’s a failure of language as the body becomes panopticonized, industrialized, marginalized, demonized and, eventually, subject to obsolescence. The body as satyagrahi must invent a new folklore of experiment to counter the growing objectification by the State.

Civil society not only has to build a sense of resistance but it also has to create a ritual of witness and trusteeship of memory so that justice is still a hope. We need a similar sense of witness around the migrant as citizen. Most of the reporting on migrants sounds like a development project gone wrong. Politicians like Uddhav Thackeray practise a social distancing to migrants. Between the CAA and the coronavirus, citizenship suffered a double blow as both refugee and migrant as categories lost their sense of entitlements.

One must add to this a recognition of the failure of language and storytelling. Sadly, news reports tend to be summaries of policy or State handouts. They don’t speak to you as they lack the sanctity of face-to-face, the power of the ‘I-Thou’ relationship, as Martin Buber dubbed it. One needs new ways of storytelling by which disasters do not get reduced to the impersonality of policy issues, to the objectivity of scientific problems. One must use the new work on the history of sciences to challenge the way we write about scientific problems.

One must remember the creativity and sacredness of memory, the respect for someone who says, ‘I was there’. The witness and the trustee have to return as a part of the new narratives of citizenship. The coronavirus needs a folktale, a commission of enquiry, colonial style, a thickness of narratives beyond graphs and policy. The storyteller must redeem democracy as an imagination under the ethics of memory.